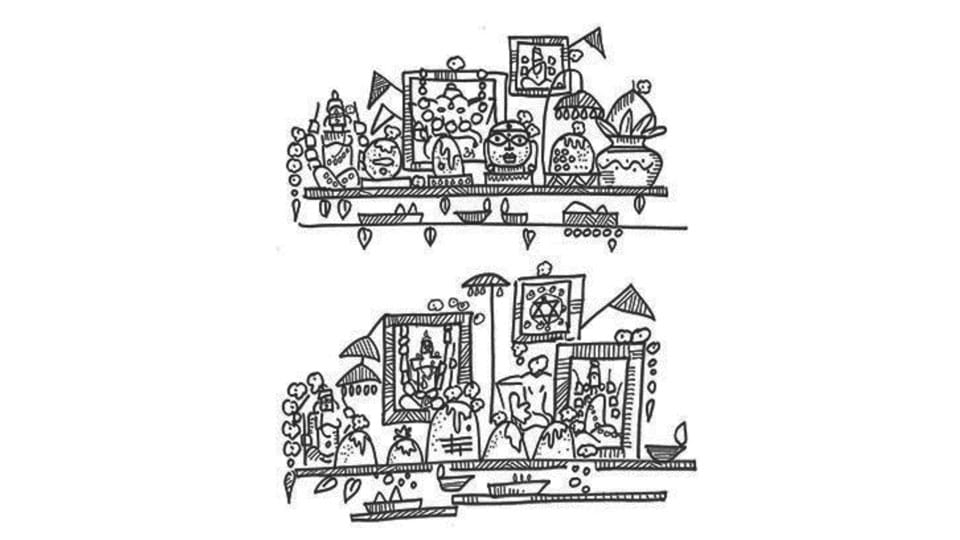 Place in the Puja Room

Hindu households have always had a puja room. Traditionally, here were located the many Gods of the household. The griha-devata of the house, the kula-devata of the clan, the grama-devata of the village, the ishta-devata of each of the family members, maybe an image of an ancestor or a yaksha who favoured an ancestor. These were usually rocks or pebbles, rarely carved. Each one was regularly bathed, anointed and decorated with sandal-paste or turmeric or vermillion, fed food of their choice, acknowledged with lamps, incense and prayers. There were special days when one of the many deities was given prominence. The rest of the days they were part of the collective of household Gods.

Each deity was important. Each deity was unique. Each one had their favourite flower and fruit and special day. On most days, they were part of the group but on some days they were special. Thus every daughter, daughter-in-law, son, son-in-law, knew their place in the household. That they all mattered always but on some days some were more special than others. The prize of place went to the deities of the patriarch and the matriarch, indicating a subtle pecking order that existed in every home, that was never overtly enforced but quietly acknowledged. New daughters-in-law came to the household with their own ishta-devata that was included in the puja room and daughters took their ishta-devata out of puja room when they got married, confident that the household they entered would make space in their puja room for her deity.

Every office is a puja room and we are all deities in the puja room. It is important to remind ourselves that we all matter in the office but not in the same way. Some people are more important than others, depending on the context. The sales department is important but so is the production department and so is the logistics department and so is human resources and finance. Everyone has to work with each other as in a puja room for the benefit of the entire office.

Sometimes, people — especially new joinees — forget they are part of a pre-existing ecosystem. They come in thinking they are God (singular with capitalisation), greater than everyone else and that singularly they will change the system. They cannot, even if they tried. They become effective only when they realise they are one of the Gods (plural without capitalisation) and part of a grander collective.

The confusion happens because of ‘aarti’ — the songs sung in praise of the deity when they are being invoked (avahan). Typically these songs tell the God that they are greater than all the Gods and that without them the world cannot function. All this is true but in a context. In a different context, the same song can be applied with just replacement of their name with another name. And so it is easy for a God to assume, he is God that he is the only one and not part of the collective.

During interviews and recruitment, a talent is given so much importance that he starts believing that the company needs him as a saviour. He naturally enters the office assuming he is the top dog, until it dawns on him that there is already a pack of wolves inside and there is a pre-existing pecking order. Then comes the fight, the tension, a series of stressful encounters, after which a new equilibrium is reached, and God finds his place in the pantheon. Some cannot adjust and so the yajaman, he who serves and is served by all the deities in the puja room, decides this devata (deity) needs to be sent away, a practice known as visarjan.

The yajaman is the head, who gets various Gods into his puja room. The Gods exist for the benefit of yajaman’s household. He ensures they look after his needs by first taking care of theirs. It’s a symbiotic relationship.