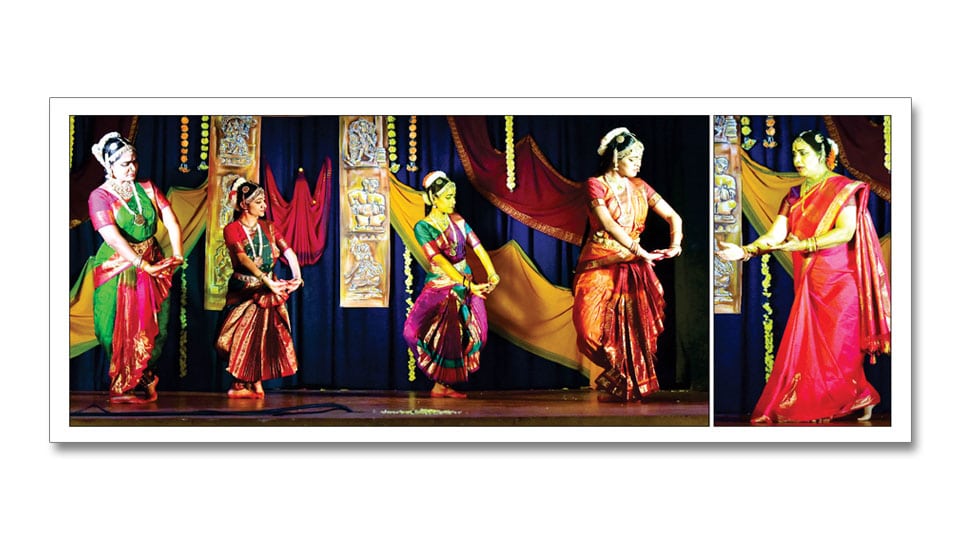 Nrityalaya Trust, Mysuru, celebrated its 39th anniversary with grandeur on the 4th of February, 2018. A whole-day event ‘Nartana Payana-Sahitya-Sangeeta Nartana Sambhrama’, including dance and a Karnatak music concert was organised by its director Dr. Tulasi Ramachandra at Mysore Vasudevacharya Bhavana. The day’s programme began auspiciously with devotional songs by Tulasi Ramachandra and her disciples, in which the pupils’ parents also actively participated.

The felicitation programme was followed by an excellent music concert by N. Srinath with H.K. Narasimha Murthy on violin and H.L. Shivashankaraswamy on mridanga.

Srinath has a powerful voice with a wide range. The concert which included ‘Sri Raghukula’ in Hamsadhwani by Saint Tyagaraja and three devotion-dipped devaranamas filled the hall with a divine atmosphere.

The evening session was a variety of dances, which had all the levels of performances by more than 30 performers ranging between the age of five and sixty. While the tiny tots in colourful dresses performed the initial level with Alankaras, elder girls performed allaripu, and ‘Ganesha Kaudhwam’ composed by Tulasi Ramachandra.

Gita Shridhar, sister of Tulasi Ramachandra gave a short sitar recital with three of her disciples. Tulasi’s brother Dwarakanath accompanied them on the tabla.     The artistes played two compositions of Gita Shridhar in Bhimpalas and Kamas.

A set of senior students of Tulasi danced to DVG’s popular number ‘Shree Chenna keshava Shringara Bhava’ from ‘Antahpura Geetegalu.’ Another set of students performed the challenging Suladi by Shreepadarajar in Kannada. The dance comprised of all the talas in the alankaras and also chapu talas describing the plight of Gopis after Krishna left Gokula. The ragas changed with each tala. Relevant ragas like Vasanti, Maand, Bhageshri, Kanada Brindava Saranga, Hindola and Shubha Pantuvarali were chosen for the Suladi.

The next number was performed by Tulasi herself, wherein she had chosen an interesting episode from Kuvempu’s ‘Ramayana Darshanam’. ‘Seeta Rama Kataksha Veekshana’ described the episode before Sita’s swayamvara, wherein Tulasi impressively covered Ravana’s attempt to lift the Divine bow and his failure, and then Seeta accidentally coming across Rama in the garden, her joy in seeing him, Urmila’s report about Rama and his valour, and then Rama lifting Shiva’s Bow with ease and winning Seeta. The music was well-composed with sections of the blank verse with and without tala. Dharitri has a melodious voice with a good range. If trained well, she can be a good accompanist for dance performances.