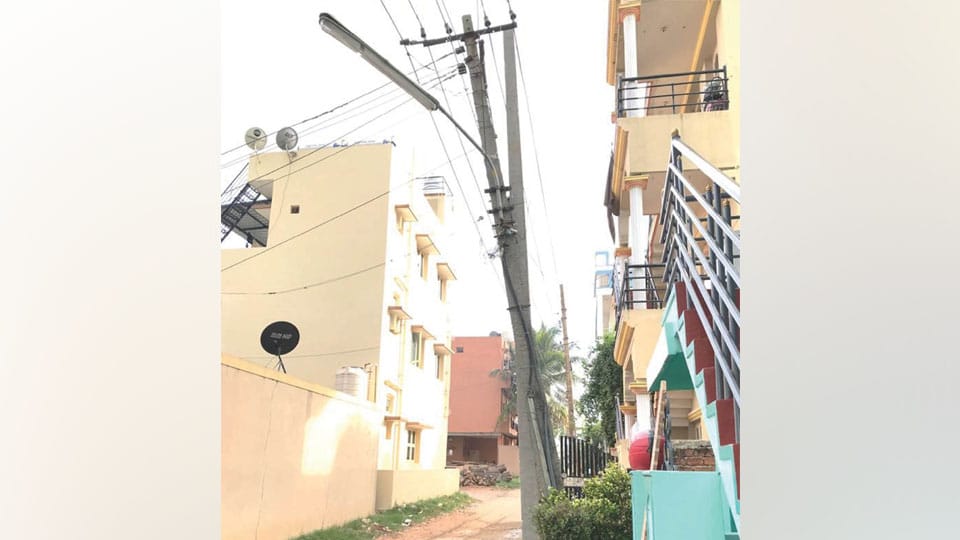 Mysore/Mysuru: Residents of 5th Cross, Krishnanagar in Yaraganahalli, coming under MCC Ward No. 36, are living in fear of a dilapidated electric pole falling down since a few years.

An electric pole located in the above address was dilapidated and was in the verge of falling down, following which the residents lodged a complaint with CESC. The officials, who received the complaint, promptly arrived at the spot, inspected the dilapidated electric pole and got a new pole erected next to the old one to transfer the power lines about two years ago, residents said and alleged that though two years have passed since the new pole was erected, CESC officials have found no time to transfer the power lines to the new pole and remove the old one.

Residents said that there are a lot of houses in the cross road, where the dilapidated electric pole is located and the residents are living in a sense of fear besides stating that even children are not allowed to play outside houses fearing that the dilapidated pole may fall anytime.

The residents have urged the authorities concerned to take steps to get the power lines transferred to the new pole at the earliest.