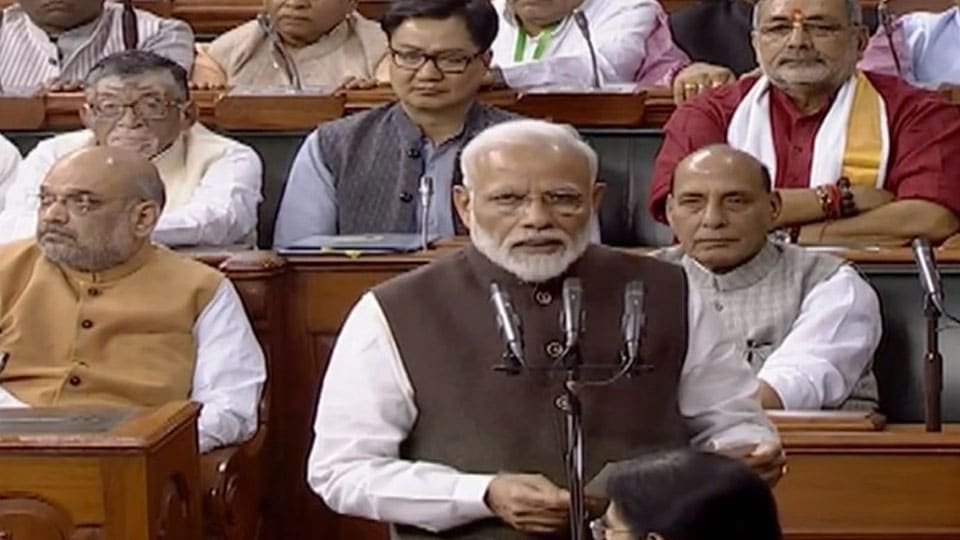 New Delhi: The first session of Parliament or the 17th Lok Sabha began this morning. During the Parliament session, the passage of the Union budget and key legislation such as Triple Talaq are likely to be on top of the to-do list for the government.

A day before Parliament session, Prime Minister Narendra Modi held an all-party meeting and also invited Presidents of all parties, who have an MP either in the Lok Sabha or the Rajya Sabha, to a meeting on June 19.

Ahead of the session, BJP MP Virendra Kumar took oath as the pro tem Speaker of the 17th Lok Sabha, at Rashtrapati Bhavan. The oath was administered by President Ram Nath Kovind. Prime Minister Narendra Modi was the first among MPs to take oath in Lok Sabha. Later, Amit Shah took oath.

Modi said, “After several decades, a government has won an absolute majority for the second term. People have given us the chance to serve the country again. I request all the parties to support the decisions that are in favour of people.”

The PM said, “The role of an active Opposition is important. The Opposition need not bother about their numbers. I hope they will speak actively and participate in House proceedings.”

Sonia Gandhi, Chairperson of the Congress-led United Progressive Alliance, will take oath along with other lawmakers from Uttar Pradesh. In 2014, the Lok Sabha Secretariat had made an exception for the former Congress President.

She and BJP patriarch L.K. Advani had taken oath right after the Ministers to reflect their seniority. This time, the Secretariat did not extend the special gesture to Sonia Gandhi. After Union Ministers take oath, newly-elected MPs are called to take oath in the alphabetical order of the States they were elected from. Within a State, too, the MPs are called in an alphabetical order.

Union Minister Smriti Irani, who defeated Congress President Rahul Gandhi in Amethi, received the longest applause when she took oath. As soon as she was called for oath taking, ruling BJP members, including Prime Minister Narendra Modi, Home Minister Amit Shah, other Union Ministers and MPs were seen enthusiastically thumping the desk for a long time