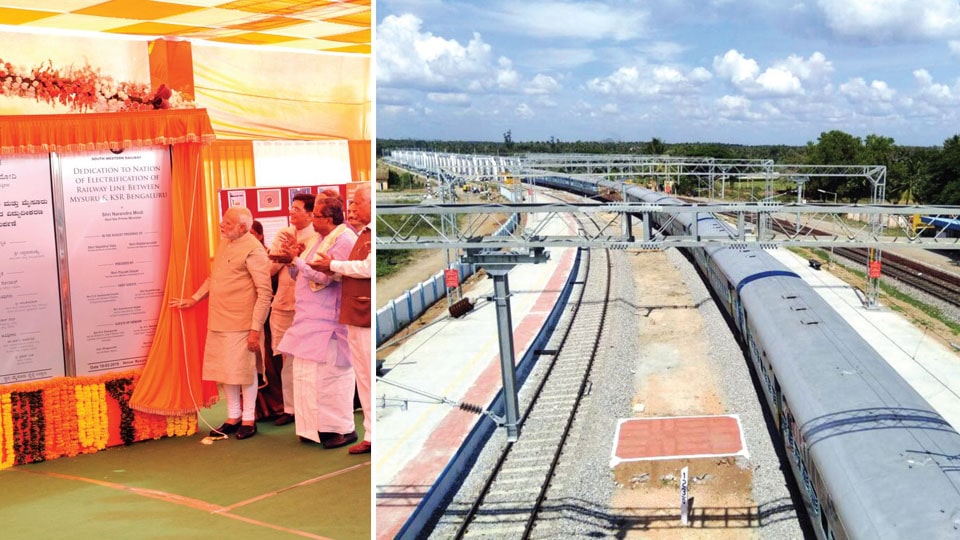 Mysuru: The electrification of the Railway Line between Mysuru and Krantiveera Sangolli Rayanna (KSR) Railway Station in Bengaluru was commissioned by Prime Minister Narendra Modi at the City Railway Station yesterday.

Speaking after commissioning the electrification project, Modi said that this will herald a new beginning between the two cities and many more projects can be planned for the commuters between two cities. Making a mention of the proposed 800-crore project to build a Satellite Station for Mysuru at Naganahalli, Modi said that the Station will be of international standards.

“The Union Government has planned to build the state-of-the-art station at Naganahalli to ease the pressure on Mysuru City Railway Station. We have made the allocation in our 2018-2019 Budget and the Satellite Station will have ultra-modern facilities including many structures that will cater to the needs of the commuters between the two cities,” he said.

Deviating from the Railway projects, the PM also announced that a six-lane National Highway will be built between Mysuru and Bengaluru. “This project is worth more than Rs. 6,000 crore and once implemented, the double track electrification, Satellite Station at Naganahalli and the National Highway will revolutionise travel between the two cities,” he said. 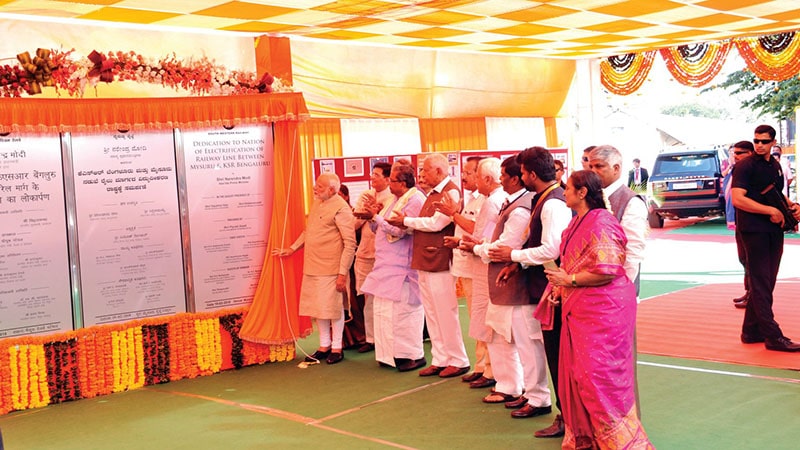 The commissioning of the electrified Railway Line between Mysuru and Bengaluru will give an impetus to the transport infrastructure in the region besides enhancing connectivity between the two cities.

Till now, electric trains (including the Shatabdi Express) headed towards Mysuru from different destinations halted at the KSR Station in Bengaluru for engine change. The electric engine is detached and a diesel engine is attached to the train so that it can proceed towards Mysuru. The process of detaching the diesel engine and attaching the electric engine at KSR Station is repeated once the train arrives from Mysuru so that the train can travel to different destinations.

Railway officers said that this process caused considerable delay. Now that the electrification is completed, the Railways can save time and fuel, they said. Annually, Rs. 20 crore worth fuel can be saved, they added.

The electrification was possible as the double track project was completed last year. The Rs. 990 crore track doubling project was initiated in 2007-2008 under an agreement between Railways, Union Government and the State Government. While Rs. 581 crore was spent by the State government, the Centre contributed Rs. 409 crore.

The 225-year-old 1000-tonne armoury of Tipu Sultan at Srirangapatna came in the way of doubling works. The monument was successfully translocated and the doubling work picked up pace last year.

The electrification of the 139-km stretch was taken up along with the track doubling work. The project was executed by the Central Organisation for Rail Electrification (CORE), Allahabad. It was completed two months ago and the Commissioner of Rail Safety (CRS) finished the mandatory inspection and gave the approval for commissioning of the passenger services in the second week of December.

Officials said the full benefit of the electrification will accrue only when Mysuru and Bengaluru are served by Mainline Electric Multiple Unit (MEMU) suburban services. This service is expected to reduce the commuting time significantly besides saving diesel. It will not only increase passenger carrying capacity but will result in better utilisation of line capacity. 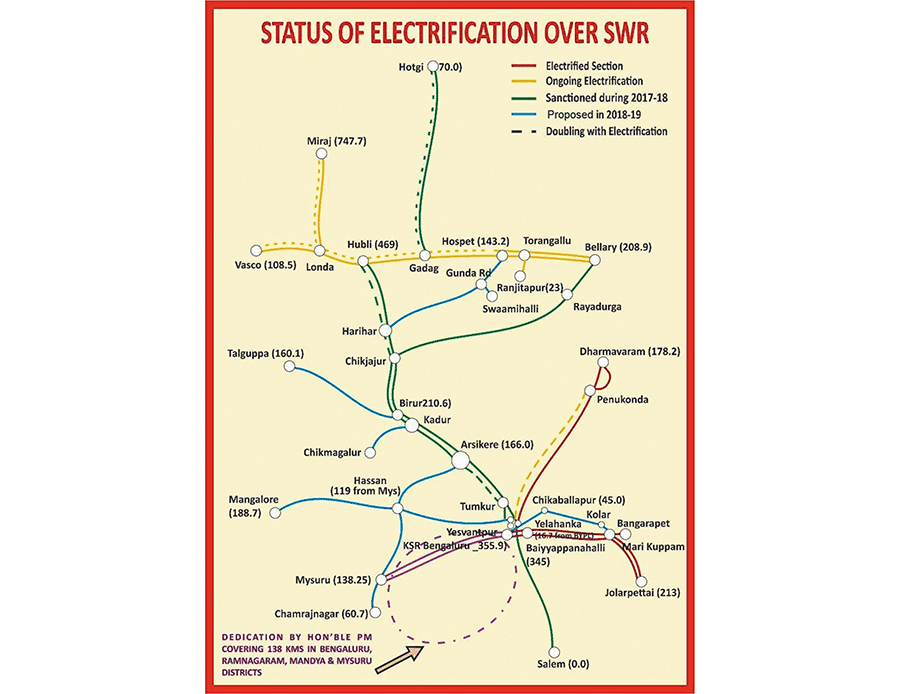 It may be recalled here that an MoU was also signed between the Government of Karnataka and Indian Railways on Jan. 16, 2017, to convert 15 trains to MEMU units at a cost of Rs. 327.79 crore with the State government contributing 80 percent of the total cost.