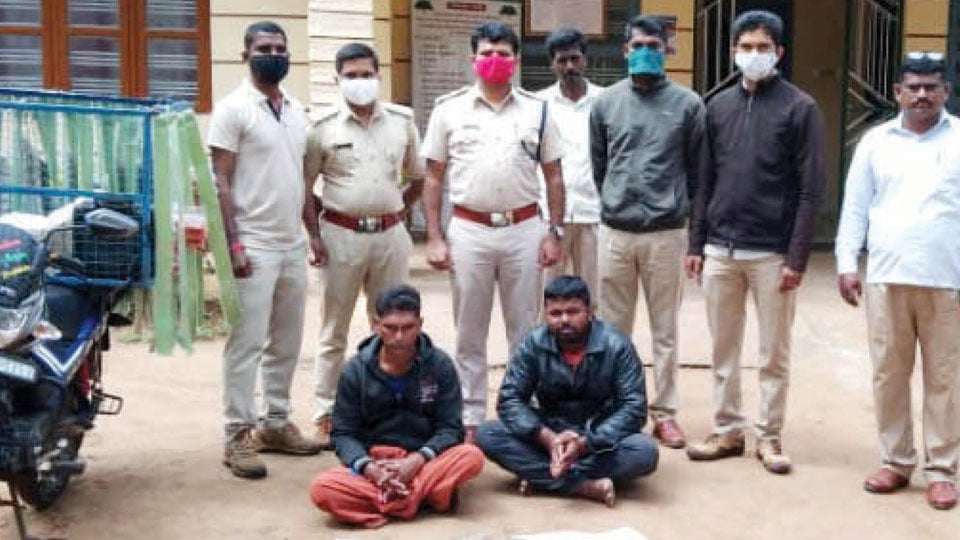 Periyapatna/ Hanur: In separate cases, the Forest staff have arrested four poachers on charges of hunting a jackal at Periyapatna of Mysuru and langur at Cauvery Wildlife Forest area in Hanur taluk of Chamarajanagar.

In the first cases, the Forest staff arrested two persons, who had hunted a jackal by placing country-made bomb in the form of food in the agricultural field of one Papegowda at Sathyagala in the taluk.

The Forest staff have recovered the carcass of the jackal besides seizing a knife, two country-made bombs, mobile phones and a bike from them.

The Forest staff are on a look-out for another accused identified as Gopi of Pakshirajapura, who is absconding.

In the second case, the staff of Cauvery Wildlife Sanctuary have arrested two poachers, who had hunted a langur with a country-made gun and have recovered the carcass of the wild animal besides seizing the weapon from them. The arrested are 40-year-old Madesh and 21-year-old Rajendra of Tellanur village in Hanur taluk.