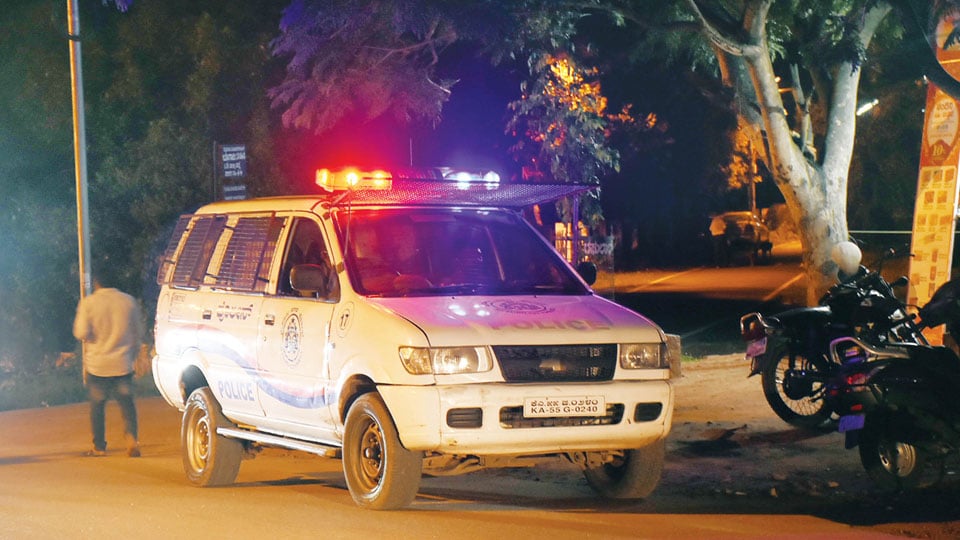 Law enforcement machinery under pressure to bring down crime graph

Mysore/Mysuru: Residents can hope to look forward to lesser crimes if the Police actions are anything to go by. Their new initiatives like intensifying night patrolling will certainly help control the crime graph that is heading north in the city with incidences of gang rape, dacoity, robbery, shootout and chain-snatching.

Pulling up their socks, the Police have stepped up patrolling and over 40 percent of the entire 3,000 Police force including from all Police Stations, Traffic Stations, Cyber Stations, CEN (Cyber Economics & Narcotic Crimes), Karnataka State Reserve Police (KSRP) and City Armed Reserve (CAR) Police have been put on night surveillance duty.

The downside of this, however, is that there are no personnel to perform the regular office duties and the Police force is under pressure. The short-staffed Police machinery is already under stress and these ‘orders from above’ to achieve strict surveillance are further squeezing out their energy.

“Many of us are working double shifts and our leaves have been either cancelled or postponed and we are in a state of quandary,” said a Police Head Constable attached to a Station at the city centre.

Nearly 50 officers have been pressed into service, who will do night patrolling on their vehicles including Garuda, PCR, Cheetahs and also Policemen in mufti on their own bikes have been roped in to keep a watch at regular intervals.

Beat Constables and those on night duty have been asked to give a detailed account of their patrolling the previous nights to their higher-ups. They have also been asked to look out for people moving under suspicious circumstances during nights and check their antecedents.

READ ALSO  Chain-snatching back after a lull

“The idea behind the entire exercise is to not only check crime but also increase accountability among Police Officers. We will monitor their performance regularly,” said a senior Police Officer.

All Police personnel from the rank of DCPs to Constables are out on duty on city roads at night and are working in shifts to put an end to the increasing number of crimes. They will  keep a check on gangs that are involved in chain snatching, mobile snatching, waylaying and other offences. This move is an addition to the existing regular night rounds conducted every day.

These teams also include the ACPs, Inspectors, Sub-Inspectors, Head Constables and Constables. To manage with the current personnel strength, others from special units like KSRP, CEN and CAR have been roped in.

The jurisdictional Inspector will brief the senior Officer about the overnight operation the next morning, every day. The Police believe that visibility will deter suspects from committing crimes. Notably, the Police teams are not just concentrating on the main roads but also interior stretches as most suspects have clearly taken to those stretches to escape after committing an offence.