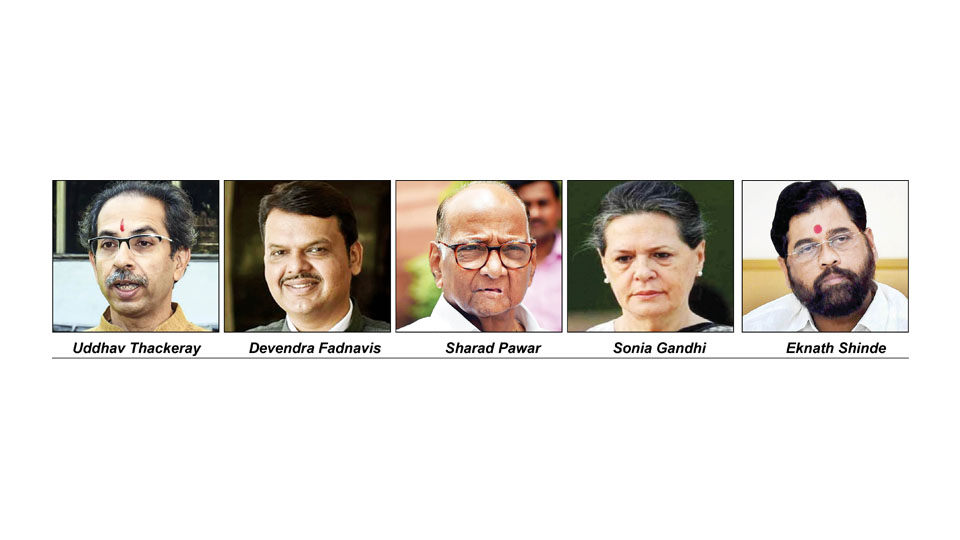 Political pundits define politics as an art of possibilities. Some call it an act of bravado. The ultimate goal is to capture political power that overrides all other powers that one can possess — wealth, education, professional success and social status. Birbal might be an intelligent, wise man, but Akbar was the supreme, political authority, the Emperor.

The world, therefore, belongs to the brave not to the meek. The brave will work out the art of succeeding in politics by war (as in the past) or chicanery, manipulation, intrigue or such. That is what we are seeing today in Maharashtra politics, the land of Chhatrapati Shivaji who was the first Hindu warrior to challenge the  well-established Mughal Empire when Aurangzeb, the most feared Emperor, was at his zenith of power.

After Aurangzeb, it was Maratha might all over India, exceptions apart, with different dynastic names like Scindia, Holkars and Bhosale. And it was the collapse of Maratha power and of some Nawabs in the North and North-Eastern India in their war and treaty with the East India Company that led to the establishment of the British Raj. That lasted till 1947 when we got independence and most importantly we got a United India; no matter truncated. Let it be.

It is, therefore, very sad to see the present political upheaval in Maharashtra where the political party formed under the inspiration of Chhatrapati Shivaji by its Founder Balasaheb Thackeray tottering under poor leadership. A leadership that compromised on the sublime principles of ‘Maratha pride’ and Hindutva of Chhatrapati Shivaji. The leadership was so blinkered and short-sighted it could not see the snare laid before it by NCP and Congress. It was like a khedda operation, jointly led by NCP and Congress, to tame the Shiv Sena tiger.

I was in Mumbai when Bal Thackeray was delivering speeches all over Mumbai, targeting mainly the ‘Madrasis’, meaning South Indians, making fun at them for wearing ‘lungis’ etc. I had attended a couple of such small meetings with my Marathi colleague while working in Free Press Journal.

In later years, it took on Muslims and grew in size and power to capture the Mumbai Corporation. Hindutva became its credo and in alliance with the BJP, it captured the political power of the State. In the meanwhile, Sharad Pawar, who broke away from Congress on the issue of a person of foreign origin seen at the threshold of Prime Minister’s Office, established his own party NCP (Nationalist Congress Party) with a Marathi flavour. The Shiv Sena embraced BJP as a pure Hindutva party unlike the NCP. Since then all these three major political parties were playing their political role according to their ideology, ability and acumen. All the three were able to rule the State at one time or the other.

However, the Shiv Sena, in alliance with the BJP, came to rule the State with Manohar Joshi as the Chief Minister (Sena-BJP) in 1995. Then Narayan Rane became the Sena-BJP Chief Minister from 1999 for a few months. Then for another about 10 years Congress and NCP ruled till BJP-Sena came to power again in 2014 with Devendra Fadnavis as the Chief Minister till 2019. And then the political equation in Maharashtra changed, changed in an ugly manner that we see today.

READ ALSO  Tributes to Dr. A. A. Kuttappa: A gentleman in his profession & social life

This Government of Shiv Sena, NCP and Congress alliance with Shiv Sena Chief Minister Uddhav Thackeray, came to power in November 2019. All seemed well till early June 2022. Then suddenly Eknath Shinde, a top Shiv Sena leader and a senior Cabinet Minister upset the apple cart of the alliance. Now the political pot of Maharashtra is boiling steaming hot.

In logic, we were taught about ‘cause and effect’. In physics we have heard of ‘action and reaction’. These are the natural laws and what we see today in Maharashtra is these laws in action.

When the election results came and the number of seats counted, the pre-poll alliance partners, BJP and Shiv Sena, got the magic number to form the Government.

It is where, like the two fighting cats and the monkey story (moral story), the NCP’s Sharad Pawar came to support the Shiv Sena’s claim to Chief Ministership. Uddhav Thackeray did not realise that by going with NCP and Congress he was committing a political harakiri. And that is what we are seeing today.

But, first the story: One day two cats found a loaf of bread. They clawed each other to eat the bread and fought for a long time. Along came the monkey. “Why are you fighting?” he asked. The cats snarled, “We are fighting because both of us would like to eat the bread.”

The cats said, “We don’t want the other to get more, so we are not able to share it.”

“All right,” said the monkey, “I will assist you to cut it in half.”

The monkey tore the loaf into two. “One bit appears much bigger, let me get them to the same size”, he said and ate a little of one of the pieces of the bread. Then the other part looked bigger. So he ate a bit of it also.

The cats were so busy fighting they were unaware the monkey was eating the bread and had eaten the entire loaf.

When the cats found the monkey running away, they realised that they should have worked together and shared.

Shiv Sena Spokesperson had said that there was a pre-poll understanding to share the Chief Ministership, on two-and-a-half years each basis, for which BJP was not ready.

I have not read or heard any confirmation or denial about this ‘word of honour’ from the BJP. But a wag told me that what H.D. Kumaraswamy of JD(S) did to B.S. Yediyurappa of BJP in 2007 refusing to handover Chief Ministership to the latter after 20 months, as per the ‘word of honour’, was Vachana Brashta and what Uddhav Thackeray did was Dharma Brashta. I do not know. But what I know is what they did was unethical.

If BJP had agreed, Eknath Shinde would have been the Chief Minister etc., etc., is the refrain of Shiv Sena. But now, bygones are for ever bygones… Let us see how this drama unfolds and ends.