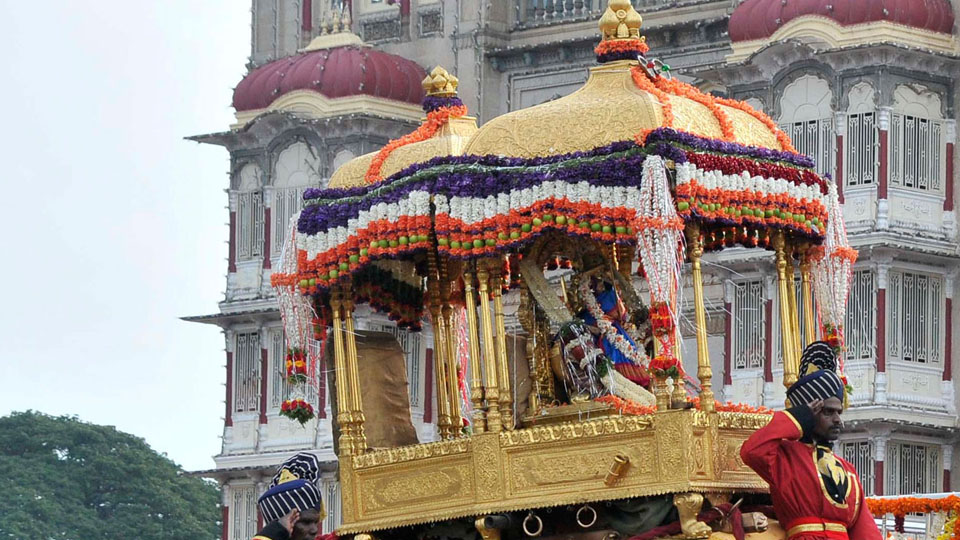 Mysuru: At a time when elected representatives are desperately waiting to steal the limelight and dominate this year’s Dasara festivities, beginning Oct. 10, the Election Commission (EC) has put a spoke in their wheels by enforcing the Election Model Code of Conduct in Mysuru and Mandya for the forthcoming Lok Sabha (LS) elections.

On Oct. 6, while announcing the calendar of events for by-polls to Mandya LS Constituency to be held on Nov. 3, the EC imposed immediate enforcement of Model Code of Conduct that prevents elected  representatives, along with their fleet of cars and posse of security men, from participating in public functions as a representative of the government. As K.R. Nagar (Mysuru District) comes under Mandya LS Constituency, the Code applies to Mysuru District as well.

This means that elected representatives including Chief Minister H.D. Kumaraswamy, District Minister G.T. Devegowda, Tourism Minister S.R. Mahesh and a host of other Ministers and MLAs cannot take part in the Dasara ‘Nada Habba’ in Mysuru, Mandya and Srirangapatna as they are government programmes.

Following this development, Mysuru Deputy Commissioner (DC) Abhiram G. Sankar, who is also the Dasara Special Officer, is likely to write to the Election Commission of India through State Election Commissioner, seeking clarification on the participation of elected representatives in Dasara programmes as it is a State festival. He said a reply is expected by Tuesday as today (Monday) is a government holiday on account of Mahalaya Amavasya.

While the DC has expressed confidence that the EC will relax the Code of Conduct in Mysuru, it remains to be seen if the Commission will concede to the request by Oct. 10 as just a day is left for Dasara inauguration.

As per tradition, Dasara is scheduled to be inaugurated on the morning of Oct. 10 atop Chamundi Hill by noted writer, philanthropist and Chairperson of Infosys Foundation Sudha Murty in the presence of CM Kumaraswamy and Deputy CM   Dr. G. Parameshwara.

If the EC does not relax the Model Code of Conduct, only Sudha Murty and the DC will inaugurate the festival. Elected representatives will also have to stay away from all the stage programmes as part of Dasara including Flower Show, Aahara Mela and Palace Cultural Programmes.

Also, CM Kumaraswamy will have to stay away from inaugurating Vijayadashami procession where, as a State Executive head, the CM showers flower petals on Goddess Chamundeshwari placed inside the Golden Howdah, mounted on elephant Arjuna.

Coming to local bodies, this time, it is sure to be a Mayorless Dasara as there is no indication of the announcement of Mayoral poll schedule. The Mayor and Zilla Panchayat President are the key persons during Jumboo Savari and whoever is occupying those posts, rides horses along the procession. Even if the EC gives its consent for elected representatives to participate in Dasara, no one will ride the Mayor’s horse this time.

Meanwhile, ZP President Nayeema Sulthana had a chance to ride the horse during Vijayadashami procession as she still continues to be the President following the withdrawal of her resignation to the post. It will be a disappointment for her if the EC does not relax the Code for Mysuru as probably she might have to give away her post to another candidate in the coming months.

In the absence of netas, the bureaucrats and Department Heads will steal the show and exercise control over Dasara.