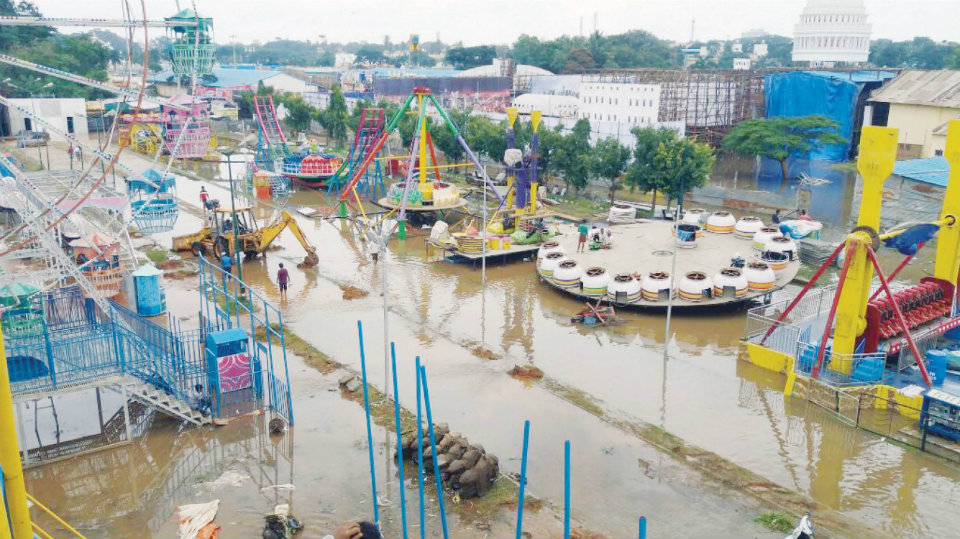 No takers for Dasara Exhibition tenders

Mysuru: Third week of September 2017 saw unprecedented flooding of Srirampura and surrounding areas in city where roads were submerged, lakes breached and normal life was thrown out of gear. So much so that boats had to be used to vacate residents to safer areas.

One of the flooded areas was the Dasara Exhibition Grounds where most of the stalls were filled with water and the Amusement Park was almost submerged for days together. As a result, the Expo saw less footfalls and shopkeepers reported huge losses. Even the extension of dates did not help exhibitors make profits.

Is the flooding factor a deterrent this year for the exhibitors to set up stalls? Seems yes, as there are no takers for Exhibition tenders, forcing the Karnataka Exhibition Authority (KEA) to repeat the tender process.

This year, the State Government had announced that the exhibition will be inaugurated along with Dasara festivities on Oct. 10 and would remain open till December-end. The government had also mooted a grand plan of converting the Dasara Exhibition Grounds into a round-the-clock and all-year exhibition and events.

Accordingly, tenders were floated and Wednesday and Sept. 19 was the last day for the exhibitors to present their tenders. But the Exhibition Authority has not got a single tender for entry tickets, parking lot fee, entertainment section and the 136 commercial stalls. A tender amount of Rs. 6,99,30,000 was fixed this year.

As there are no takers for tenders, a worried Exhibition Authority has decided to repeat the tender process and call for fresh applications. This time it will be a short-term tender. One of the reasons for the lack of interest on the part of exhibitors is the threat of flooding. Exhibitors do not want a repeat of last year where they incurred huge losses, sources told Star of Mysore.

Last year, a tender amount of Rs. 6.66 crore was fixed and Bengaluru-based Fun World had bagged it. It remains to be seen if any company comes forward to take the tender or will the Exhibition Authority itself conduct the exhibition. 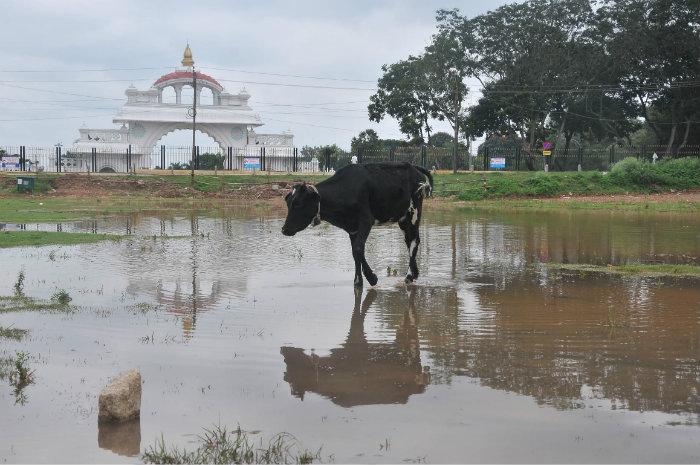 Reacting on this, Karnataka Exhibition Authority CEO N.M Shashikumar told SOM that last year’s water-logging at Exhibition Grounds might be one of the reasons for exhibitors not taking any interest in this year’s tenders.

“We can’t rule out this possibility as we had got a lot of tender enquiries but no one has so far applied for tenders. Last year, the big drain was blocked on Nanjangud Road due to some civic works. Due to this, rain water flowed back to the exhibition grounds. Now there is no such problem,” he said.

As per the government plans, there will be 34 government stalls (basically information stalls and not commercial) to disseminate information about government schemes and programmes. Accordingly, the Exhibition Authority had written letters to all Zilla Panchayats (ZPs) in Karnataka, inviting them to participate in the exhibition. The communication was sent to ZPs on July 31 and Sept. 14.

While a handful of the ZPs responded, most of them preferred to stay away, As such, works are on to build only seven government stalls (out of the targeted 34) at the exhibition grounds. This is a good development according to Shashikumar. He is hopeful that many ZPs will come forward to set up stalls in a couple of days.

Higher Education Minister G.T. Devegowda, who is also the Mysuru District Minister, recently held a meeting with Vice-Chancellors of various universities and asked them to set up stalls that highlight their achievements in the field of higher education. The idea behind the meeting was to spread information on the education sector and attract the youth crowd.

Following the Minister’s meeting, a separate section has been reserved for the universities to set up stalls at the expo  grounds. But so far, no university has come forward to set up stalls and they have not even communicated about the possibility of setting up education stalls.

When asked about this, Shashikumar is optimistic that as there are 20 more days for the Dasara to be inaugurated, stalls will be established in the due course. There might be many last-minute entries, he hoped.

“We will again call for tenders and open them on Sept. 28. If there is no response, we will hold a meeting on Sept. 28 to chalk out future strategy. If there are no takers, we will have to run the expo ourselves. We have to ask independent amusement park organisers in Tamil Nadu, Kerala and Andhra Pradesh to set up the Amusement Park,” he added.