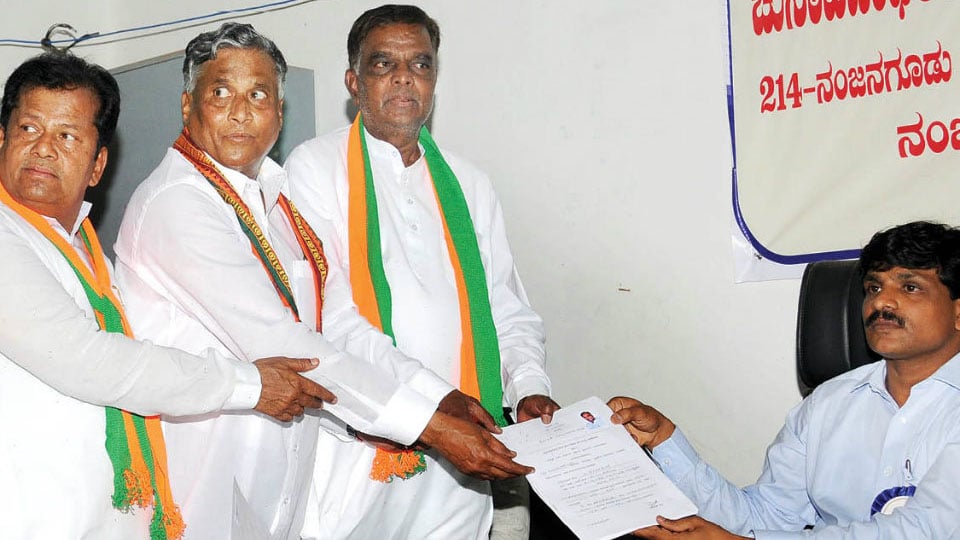 Geetha Mahadevaprasad and C.S. Niranjan Kumar file nominations under shadow of clashes between Congress and BJP activists at Gundlupet

The candidates in fray came in grand processions amidst cheering supporters and filed their nomination papers.

The JD(S) is not fielding candidates from both constituencies, thus paving way for a direct contest between the BJP and Congress.

At Gundlupet, the battle of one-upmanship between party workers of BJP and Congress resulted in them exchanging blows and pelting stones and slippers at each other. Trouble began as two processions – one by the BJP and the other by the Congress – met at the Taluk office. They hurled abuses at each other. Soon, verbal spat turned into a fisticuffs battle. The Police had to resort to lathi charge to disperse the mob. One person sustained injuries and has been admitted to a hospital. Notably, Section 144 was imposed 500 metres around the Taluk office. 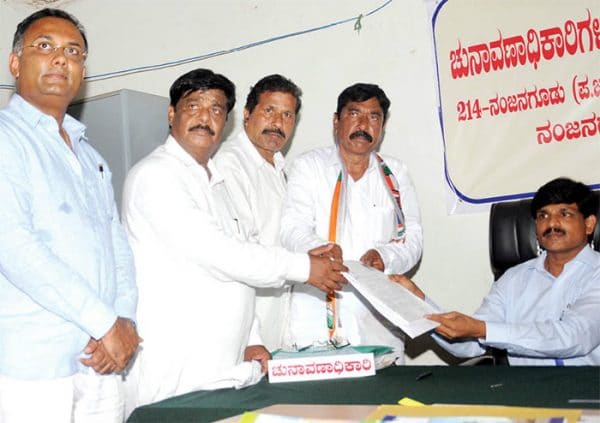 The border town of Gundlupet today wore a festive atmosphere with banners, flags, buntings of BJP and Congress dominating every nook and corner. BJP workers assembled at the D. Devaraj Urs Stadium this morning and came to the Taluk Office in a procession that had more than 7,000 people.

The procession reached the Taluk Office at 10:30 am and Niranjan Kumar handed over the nomination papers to Assistant Commissioner Kollegal Sub-Division Nalini Atul who is also the election officer.

After Niranjan Kumar filed his nomination papers, Geetha Mahadeva Prasad filed her papers at around 2 pm. The Congress rally began at Kodalli Circle and arrived at the Taluk office via Ooty Circle. She was accompanied by Food and Civil Supplies Minister U.T. Khader. Earlier, Prasad, along with party leaders offered special pujas at Prasanna Chintamani Ganapathi Temple and went on a procession in an open vehicle to the Taluk office with much fanfare to file the nomination papers. The procession passed through Mahatma Gandhi Road and Rastrapathi Road with BJP activists shouting pro-party slogans.

The procession witnessed thousands of Congress and BJP activists taking part in the rally braving hot sun with their candidates filing nomination papers. The entire stretch between Hullahalli Circle, Rastrapathi Road and Mahatma Gandhi Road was jam-packed with activists of both the parties. Activists were seen holding party flags and shouting pro-party slogans as the candidates and political leaders waved to the surging crowd. 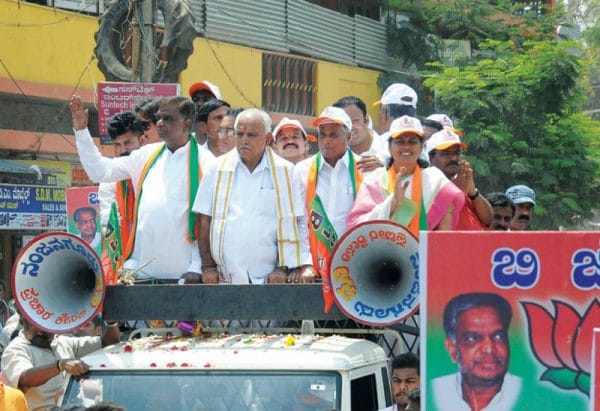 BATTLE OF PRESTIGE: The by-election has turned out to be a battle of prestige between Chief Minister Siddharamaiah and Yeddyurappa. Political pundits say it will be a key indicator for the 2018 general elections. Elections to both Nanjangud and Gundlupet will be held on April 9.The last date for filing the nominations is Mar. 21 (tomorrow).

The elections to the two constituencies were necessitated following the resignation of V. Sreenivasa Prasad as MLA after he was dropped from the Cabinet and his subsequent entry to the BJP. The polls to Gundlupet are being held owing to the sudden demise of H.S. Mahadevaprasad. The Congress is hoping to garner sympathy votes following the death of Mahadevaprasad.