Home » News » Popping up Pothole Problem: Even MCC Boss is not spared ! 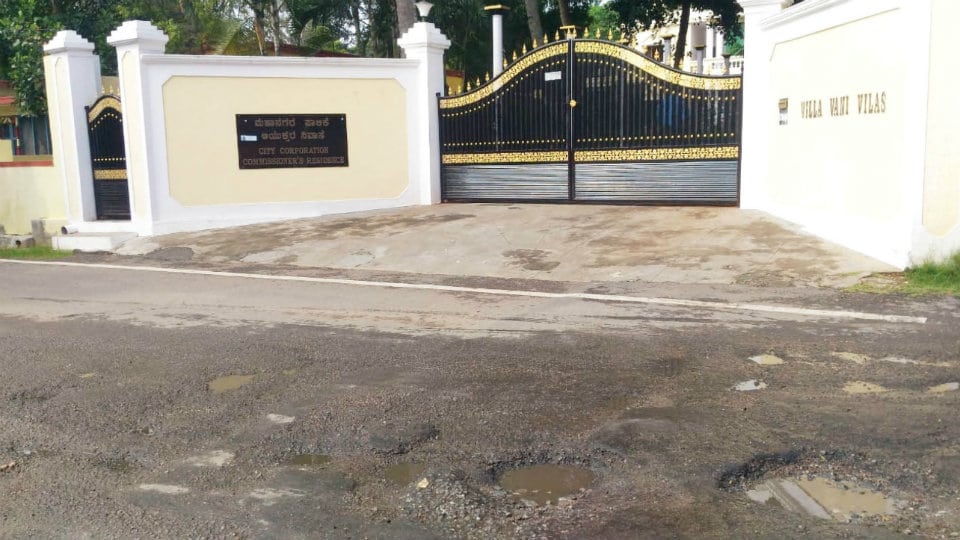 Popping up Pothole Problem: Even MCC Boss is not spared !

Mysuru: One of the basic duties of Mysuru City Corporation (MCC) is to provide a pothole-free road but the civic body has miserably failed with complaints of pothole-ridden roads pouring in from various parts of city on a day-to-day basis.

Forget main roads or extensions where potholes are ubiquitous, even the road in front of the MCC Commissioner’s Bungalow is full of potholes and the officer drives to his office and back home on the same road.

For the record, the Commissioner is the highest decision-making authority in the MCC after the Deputy Commissioner. Though they have political bosses like the MP, MLA and Mayor, the Commissioner holds the key to crucial financial and administrative decisions. The MCC Commissioner’s spacious bungalow is located on KRS Road – A. Ramanna Circle near the Vani Vilas Water Works. Aptly, the bungalow is called “Villa Vani Vilas”.

A Star of Mysore reader called up this office today morning and mentioned about the pothole-ridden road. He says, the Commissioner’s car takes the road to the right (of the bungalow gate) for him to reach his office and back  home. While the right side road is pothole-free, the left side of the stretch is full of potholes, he said.

Following the call, SOM went to the spot and found that the reader’s version was correct. On probing further, we found that many points of the KRS Road from the starting point near Rotary School till the Krishna Raja Sagar is unfit for travel. While at least cars can withstand the pothole, two-wheelers are put in serious danger  especially when it rains where it is impossible to say if it is stagnant water or a pothole waiting for a victim.

MCC officials, on condition of anonymity, said that the road in front of their boss’ house is bad because a lot of water tankers (generally a heavy vehicle) carrying water to and fro Vani Vilas Water Works damage the road.

“The road carries more pressure as there are many heavy vehicles travelling,” they said. However, they were silent when asked why there were potholes on only one side of the road from the Commissioner’s bungalow.

Seeing the plight of the road, a layman wonders if the MCC Commissioner cannot get his home-road fixed, how the officer can make Mysuru pothole-free.