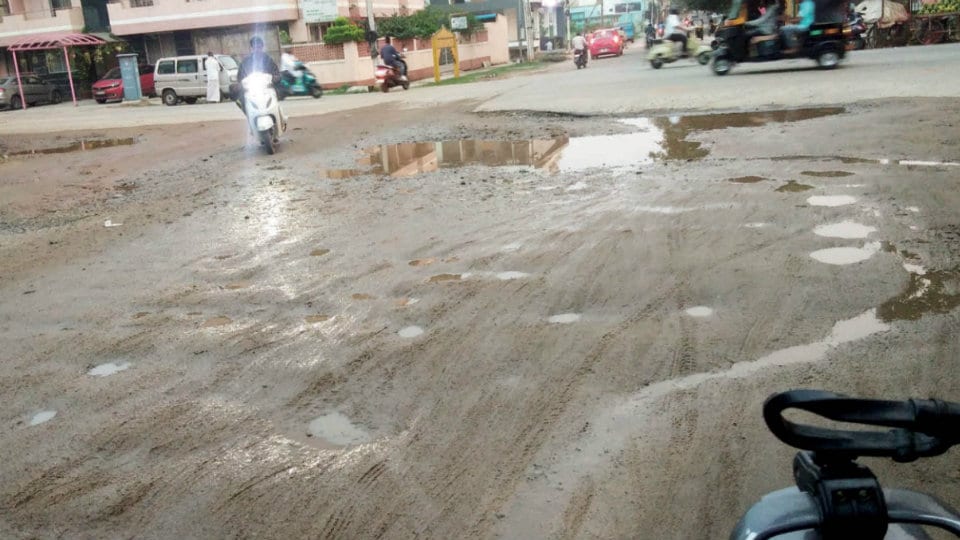 Mysuru:  Most of the roads in city resemble lunar surface riddled with potholes and craters which when filled with water during rain makes it a nightmare for riders inviting accidents. The pity is, citizens pay road tax for plying on these filthy roads unfit for humans to move.

Though the situation is glaringly grim, the civic body remains silent giving evasive replies or false assurances to hoodwink the hapless residents. If at all some repair is done, it will be hotchpotch which just opens up if it rains.

Everyday thousands of vehicles ply on the long stretch of road from Chamundi Vana junction in Vidyaranyapuram to Ring Road junction passing in front of Sterling Theatre, said to be the main access road to JP Nagar. This road is so bad that there are no qualifying adjectives to describe the pathetic condition.

During Dasara, MCC filled up mud in the potholes and the mud obviously got eroded in rain making the road slushy with cesspools making things more worse. The mud filling contractor should also have made some quick bucks, opine the aggrieved residents questioning whether MCC is so broke to properly repair the road.

Two months ago on the pretext of widening the road, broken stones were laid on either sides and the residents still wait with fingers crossed for that big development to happen.

Same is the case on the road behind Nadabrahma Sangeetha Sabha in Lakshmipuram. The laid stone pieces move towards the road during rain with two-wheelers tending to skid any moment

Residents question, why the road widening preparation is done without a schedule to complete the work with asphalting.

During the proposed widening of road, a manhole in Vishweshwaranagar near Ganapathi Temple has come up above the road surface level with crushed stone filled all around it.

During night, two-wheeler riders tend to misjudge the location of the raised manhole and could crash.

The residents of JP Nagar and Vishweshwaranagar have appealed the Mysuru City Corporation authorities to set aside all typical reasons of proposals and tender invitations and come to real action.