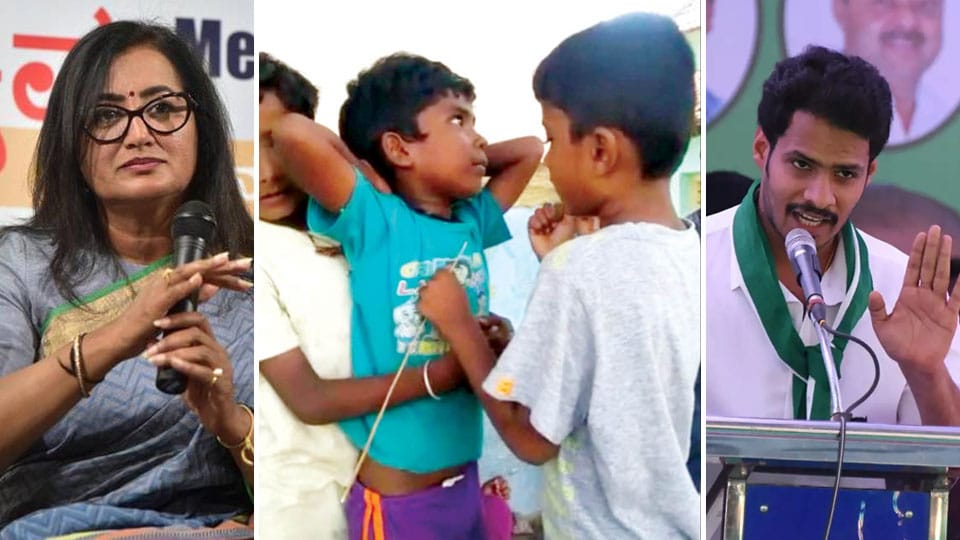 Mandya: One of the Constituencies which has caught the eye of the entire country during the 2019 Lok Sabha elections is the Mandya Constituency. Now, with children also involved in the prediction of the result, it is making a big news.

Who is going to win this high stake battle at Mandya is the answer everyone is eagerly awaiting. This is a million dollar question not only bothering the political parties involved in the election, but also the people at large. The surveys conducted by different political parties and the intelligence report got by the Chief Minister, shows what they want to hear, that is their party winning.

Amidst all this din, one question that remains to be answered is, who among the two, coalition candidate Nikhil Kumaraswamy, son of Chief Minister H.D. Kumaraswamy or Independent candidate Sumalatha Ambarish, supported by Raitha Sangha and BJP- going to win the 2019 Lok Sabha polls?

However, the children in Loksara village in Mandya seem to have given an answer to this intriguing question in their own way! The video of children of Loksara village playing ‘God’s game’ has gone viral, attracting the attention of the whole State.

Since the summer holidays are on, the children of Loksara village gather and play every day. In the video, a boy who is wearing a blue shirt starts acting as though he is possessed by God. He starts acting by shaking his body. Along with him a few others act as though they are beating the drums. Then two boys come in front of the boy who is ‘possessed’ and ask him the question-‘In Mandya will Nikhil Kumaraswamy win or Sumalatha?”  The ‘possessed’ boy replies clearly, ‘Sumalatha.’ There the video ends. This video shared by Vijay Gowda on the social media has gone viral and has become very popular.