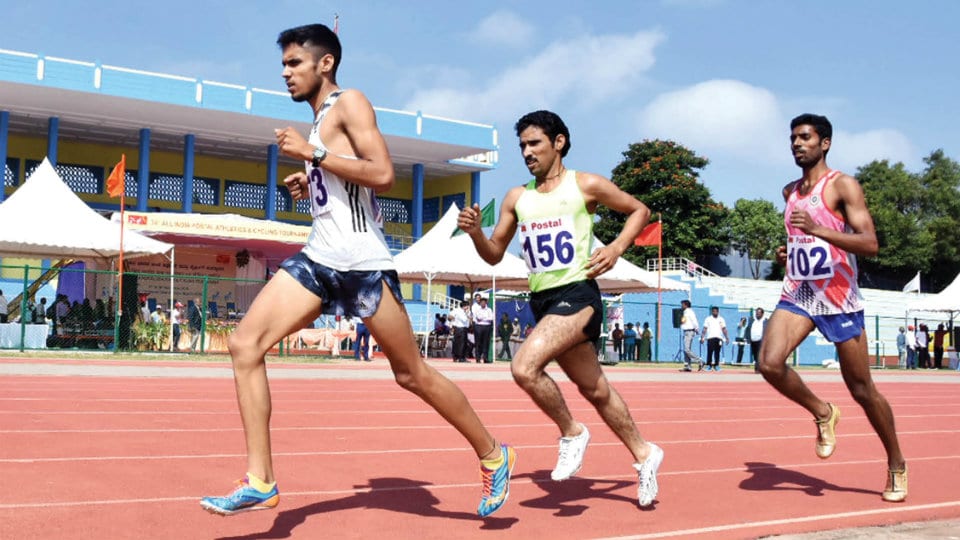 Speaking on the occasion, Yaduveer hailed the Postal Department for organising the athletic meet for postal employees and added that sports played a vital role in maintaining physical and mental health of every individuals.

Stating the example of Sri Kanteerava Stadium in Bengaluru, Yaduveer said that Mysore Royal family had been encouraging sports activities throughout.

A total of 220 athletes, both men and women, from 15 Postal Circles including Karnataka, Andhra, Telangana, Tamil Nadu, Punjab, Rajasthan, Odisha, Maharashtra, Kerala, Haryana, Gujarat, Assam, Uttar Pradesh, West Bengal and others are taking part in the in the three day event.

The cycling event organised as a part of the All Postal Athletic Meet will be held tomorrow at Manasagangothri. The event will be flagged off in front of the University Clock Tower. Races will be held in various categories such as 1,000 mts time trail, 4,000 individual pursuit, 1km scratch race, 200 mts sprint race, 1,500 mts team trail, 4,000 mts team pursuit and Olympic Sprint.

In the races held this morning, Rajkumar Fundan of Rajasthan won the 1,500 mts men’s race clocking 4:19.7 sec. He was followed by Om Prakash of Karnataka (4:29.9 sec) and N. Shiva of Tamil Nadu (4:28.1 sec). Meanwhile, Ritu Dinkar of Uttar Pradesh won the 1,500 mts in the women’s category. She was followed by the R. Shraddha Desi of Karnataka and H.M. Baria of Gujarat.

Karnataka is placed second in the implementation of Sukanya Samrudhi Yojana said Dr. Charles Lobo, Chief Post Master General of Karnataka Circle, here yesterday. Addressing press persons at Postal Training Institute in Nazarbad, he added that the scheme which provides financial needs for education and marriage for a girl child has a total of registration of 8 lakh in the State.

Adding that the Postal Department targeted one lakh registration every year, Dr. Charles said Bidar topped in the India Postal Payment Bank in the country.

He also said that about three lakh students had opened Savings Bank account in Post Offices across the State to avail various scholarship provided to them by the State Government.

“We have opened 31 India Postal Payment Banks across the State and the 9,000 Post Offices across Karnataka will work as the branch offices of the bank. Postal Department has also been in the forefront of e-Commerce business. It has been providing parcel services at a lower cost,” he added.

Dr. Charles also mentioned that the Postal Department was in talks with Mango Development Board and would soon take up delivery of mangoes across the State.