Mysuru: This is one question that is bothering people of Mysuru:  “Is Mysuru going the Bengaluru way?” The question when posed to a few residents of the Heritage City did evoke a response with a sigh. The reason is because of the concern shown by the people all over the country regarding Bengaluru and its infamous potholes, which have resulted in frequent loss of lives.

Potholes in Mysuru have gone up considerably after heavy rains. Despite the media constantly drawing the attention of the District Administration and the Mysuru City Corporation, both the bodies have turned a blind eye, feel residents and road users.

At least during Dasara the authorities posed as though they were filling a few potholes. After Dasara and due to a string of holidays, officials concerned have not only bothered not to fill the potholes but also have even refused to look at the problem. With the delay in repairing major roads, commuting on such pothole-ridden roads become a nightmarish experience for four and two-wheelers. The conditions of the vehicles too have worsened and they have to perform circus tricks to negotiate the roads.

If a two-wheeler rider tries to avoid a pothole suddenly, there are chances of him/ her falling down and the person might be hit by a vehicle from behind. This is exactly what has happened in the killer potholed-filled roads of Bengaluru.

One example in Mysuru is the road near Metropole Circle (Field Marshal Cariappa Circle). A couple of days ago, a pipeline was laid on the stretch at the turn for which a pit was dug up. But it has not been filled and there is a big pothole now.

Similarly, there are more than 20 potholes on the JLB Road that touches the Ooty Road. Besides, the footpath on the turning to KRS Road near Dasappa Circle has been dug up and the administration has not bothered to fill it up. Another big crater is surprisingly seen bang opposite the gate of Deputy Commissioner’s residence. It is such a nuisance and a threat to life because of the vehicles coming from Hunsur Road side generally speed up after the curve near the Kannada Vishwa Sammelana Guest House.

There are more than 10 potholes on the road opposite City Law Courts. The other roads that are sporting potholes include Vishvamanava Double Road, Dewans Road, and Dhanvanthri Road. Potholes dominate Santhepet Road, Shivarampet Road and Ramanuja Road.

Most of the storm water drains in the city are filled with silt. Since the MCC has not got them cleared, a situation has arisen where rainwater flows on to the street. A big pothole can be found near Hardinge Circle on the road that leads to T. Narasipura. As a result, vehicle users are finding it very difficult to drive on this road, especially as all the sub-urban buses ply on this road that resembles a mini lake when it rains. A pit was dug up for the underground work on the road near Shankar Nag Circle and it has not been covered. 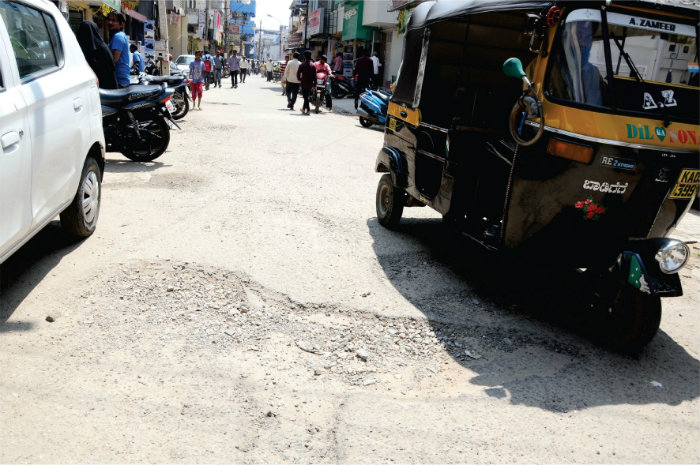 It is high time the District Administration and the MCC come forward to fill the potholes. The people are waiting anxiously as to when the work will begin and their travails end.