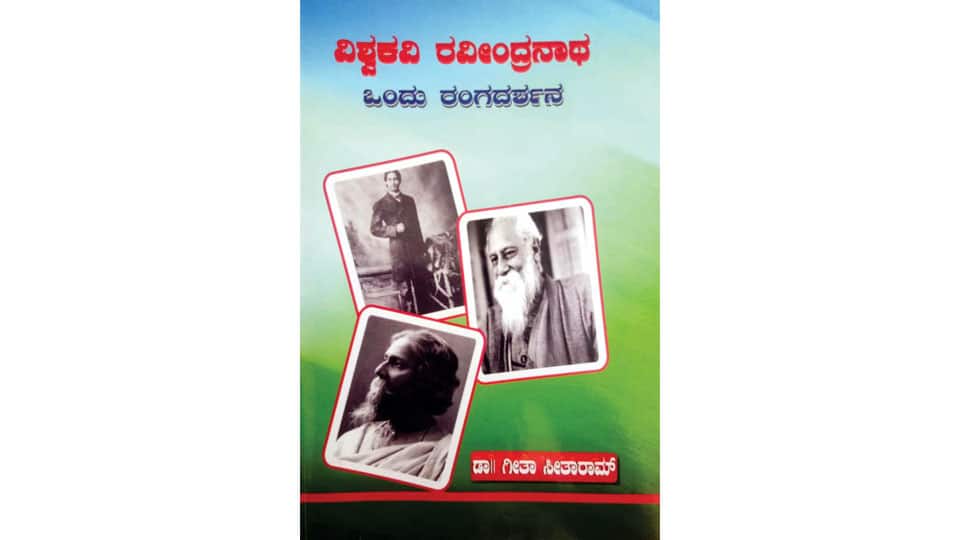 Gurudev Rabindranath Tagore is a unique personality and no amount of words can appropriately describe him. However, an attempt to put his glorious life in an accessible format is mission impossible. But Dr. Geetha Seetharam has attempted this as a playwright. Taking his life story chronologically is the best and most intelligent effort by her. She amply shows how her mind could gel with the thoughts of Gurudev.

Her book titled ‘Vishwakavi Ravindranatha – Ondu Rangadarshana’ is written in Kannada as a drama. The introduction gives an insight into what one can expect in this play, narrating the select events of a person who is so complete, a Nobel Laureate and a Gurudev. It covers his life’s journey in dialogue by fellow actors and by him, also in 10 Acts each with independent scenes.

In the 1st Act, his childhood is presented as a loner and his naughtiness comes out in dialogues with his mother and attendees. The next two Acts have 11 scenes of a boy of 8-13 years at Jorasanko Thakur Palace with a group of friends and school. This is followed by Act 4 where he is a teenager.

His formative years are described in Acts 5 and 6 that flow as a mature, senior, well-groomed and ideal citizen shown in several dialogues. Becoming a Gurudev cannot be condensed and Act 7 is dealt with poignantly. The last three Acts showcasing his old age are heart-touching.   The author has picked up narration that cannot be overlooked from the works of G. Ramnath Bhat, Ha.Ma. Nayak, Mahipal Desai and Rabindranath’s Reminiscences, to mention a few.

The play starts with his dream sequences in the dialogue with his mother which show Tagore was not an outdoor child and once he started writing, nobody could believe that it was from an 8-year-old. This is where the strength of expression in the mother-tongue bloomed and sowed productive seeds. Several stories from epics told by his mother are ingrained in his thoughts.

In the next few scenes, his trauma of suffering corporal punishment in an English School disliked by his parents shows the kind of home he grew up in and the concern his parents had.  He joins Bengali Academy and his pet ‘blue book’ of poetry and stories start filling with his mother-tongue.

Though the Tagore family could afford a private teacher for Latin, their vision was to see the beautiful poem Rabindra wrote in his mother-tongue applauded. His friends enacted mythological, historical, patriotic and even romantic stories at home and the author hasn’t missed anything.

A major turn in his life while in Calcutta was getting to know about Buddhism. From running around with friends in paddy fields to singing self-composed songs and taking a tour of several cities with his father is smoothly shown in Act 3.

His special reference to Gayatri Japam and total discipline from 17 years into youth, growing as a man grooming to become one with family attachments is depicted. Reading of exotic Geetha Govinda, Jayadeva Ashtapadi, Kalidasa and others are rendered in the scenes he used to enact on Radha and Krishna. Even Bankim Chandra and Sharad Mitra influenced his poems.

Then comes the scene when he has to prepare mentally to go to England to become a barrister as per his father’s wish. During these days, the conversation with Annapurna in Bombay to improve his English is another scene worth watching more so on the discussion of his growing beard as his trademark which he maintained till the end of his life.

In these scenes, the height of his mental stress and inability to achieve academic success in England are shown. It was not taken harshly by his father who consoled him as “there is always a hidden hand that guides people’s action. We cannot understand. You are more into being a poet, playwright, and nature lover. So go back to your brother who lives near the Ganges and create your own life.” These words lessened his trauma. England gave him a chance to learn Western music.

Acts 5 and 6 deal with Tagore living in Mussoorie with his brother and sister-in-law where a serious dialogue of marriage proposal with a 10-year-old Bhavatharani from Bihar comes on stage. As he was 22 by then, he opposed a child marriage but was willing and happy to wait till she learnt Bengali. He called her Mrinalini later.

His vision of starting a Bengali Academy first with a scientific dictionary is detailed and there are dialogues helping youngsters in a sound education. The author has not forgotten to bring up some important issues such as school fee, food and curriculum with science and art. The dream of Gurudev and Mrinalini to start ‘Shanthiniketan’ and ‘Vishvabharathi’ are well presented.

Act 7 with 5 scenes is lengthiest as 40-50 years show-cases parenting. Discussions of the power of learning from all languages, Sanskrit, English and even Pali were done with care in Schools where his own children and others studied. Epics of Ramayana, Mahabharata and Buddhism and Dhammapada cannot be missed in these conversations.

The discussions they had on various masterpieces he created which became things of eternal pride are in great detail. The mood of the nation with the freedom movement, World Wars causing upheavals, and the life of the poor, are all abridged in these scenes so also his personal tragedy and heartaches due to the loss of his son and wife.

Act 8 brings out the pain Tagore had when his Nobel Prize-winning ‘Geetanjali’ is respected less than him as a person. The dialogues repeatedly show the importance of reading it rather than admiring him as a world-renowned poet. Tagore was 60 then.

The play ends in Acts 9 and 10 with 7 scenes with all the wisdom of a 70 to 80-year-old. He is quiet and has lost his wife. A caring family of biological children and children in the University did as best as they could to comfort him.

The play at times becomes stressful because of lengthy dialogues. Apparently, it cannot be condensed as the author wanted to show his life totally. Though lengthy for a stage performance, it cannot see any event being dragged.

The book has important translations into Kannada. The National Anthem, Vande Matharam and 26 poems are given in the end.