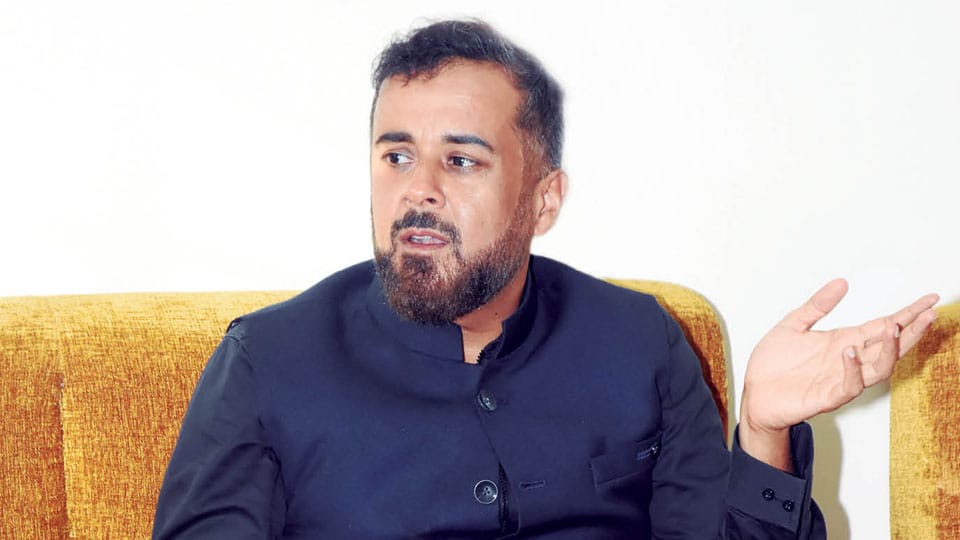 ‘India loves caste system, even literature has one’

No other English author has been the subject of as much ridicule as Chetan Bhagat. The readers of his books are often mocked for their poor English and mediocre intellect. At elite parties in metros, it’s not uncommon to hear condescending remarks about the celebrity author’s literary capability or the lack of it. Ironically, Chetan Bhagat is the first author who made India read. He has been credited with converting non-readers into readers and he has inspired thousands to turn into writers.

Well, the proof of the pudding is in eating, whether his English is bad or good, is immaterial. What matters is that he sells and sells like hot cakes. His books sell a million copies and his every book is adapted into a movie — Chetan Bhagat is living the dream of every author. The celebrity author, columnist and motivational speaker was in Mysuru to deliver a motivational talk at KSOU Convocation Hall, an event organised by Event Mitra. On behalf of Star of Mysore, Sujata Rajpal, a Mysuru-based author, caught up with him in a freewheeling chat before his session on June 4, 2022. Now read on…

Star of Mysore (SOM): From 2004 — when after many rejections, your debut novel ‘Five Point Someone’ was published by Rupa Publications — till today, how has your journey been?

Chetan Bhagat: It has been a fantastic journey. I’m lucky to get the love of so many readers. So many people buy my books and come to listen to me which is humbling. What more would an author want?

SOM:  What inspires you to write?

Chetan Bhagat:  Initially I wrote for fame. I wanted to make my mark as a writer. I have written ten best-sellers, so if I do two more, it doesn’t matter. It’s still nice to have best-sellers but it doesn’t impact me so much. I’ve reached a stage when I would want to use my time to motivate the youths. It’s so hard to make them leave their phone, leave social media, so hard to get their attention and make them read. I want to motivate our youths to start thinking about themselves and the country.

So this is my goal now. For this, I have started my YouTube motivational channel. The advice I give to them is not unique. It’s the same advice which their parents give but no one listens to them. My kids don’t listen to me but if the same thing is told by an outsider they would listen. As a result, many students have given up their phones, are reading more and are doing better in studies. I have the ability to influence youths which is also a good way to age.

SOM:  What does it take to be Chetan Bhagat?

Chetan Bhagat: Hard work, of course. Apart from that I’ve a beginner’s attitude. I want to learn something new every day. I didn’t know anything about YouTube but I’ve learnt it and it makes me feel good, so every moment I am learning. My advice — don’t bask in your past successes, try to be a better person every day.

SOM: Would you like to be a simple no-frill readable author or an internationally acclaimed award-winning author whose work not many can understand?

Chetan Bhagat: Actually you can be both. You can’t get an award for complication, but you can get one for communication. If you’re a complicated author, no one would invite you for mass events but you might be called for elite events to discuss books over wine. Being a people’s person is more important to me than getting an award.

SOM:  How do you handle trolls?

Chetan Bhagat: You can’t make everyone happy. If you express your opinion, someone or the other would have a problem. In fact, some people would have a  problem even if you make a general statement like the sky is blue. They might argue that at night the sky is not blue. Interestingly, those who criticise me are not even reading my columns or books.

SOM: People criticise your books, call you a writer whose books only non-intellectuals read, many don’t want to admit in public that they read your books. Some time ago, one journalist asked you to stop writing. What is your reaction to these?

Chetan Bhagat: How’s that journalist’s career doing? (chuckles). It’s wrong to say that only non-intellectuals read my books. Shashi Tharoor reads my books. Late Leela Seth, former Chief Justice of India, would tell me that she was a fan of my books. Gulzar sahib reads my books. In fact, no one doing better than me criticises me, it’s only the authors who are not doing as good as me who have a problem with my books and my English. My brand is well made, so such comments don’t affect me anymore.

Sadly, those who criticise me are fighting over which writer’s English is good and which writer writes crap but they fail to see which author has brought our youths to books. I have. If people read only Chetan Bhagat because it is simple to read and when they come across an article stating Chetan Bhagat writes crap, they would stop reading and go back to watching Instagram reels. Because of some people’s snobbery, we’ve lost a reader for life.

With the internet invading our limited space, our pie is already shrinking. We need to find out how to bring the youths back to books. India loves the caste system, even in literature there is a caste system, there has to be one caste at the top and the rest below.

Good English is considered synonymous with writing difficult words and complex sentences. Good writing is good thinking. We have encouraged only a certain class of writers, but how about those readers who can’t understand difficult words. It is no longer possible to ignore the elephant in the room. There is still an opportunity, there are so many genres like horror, children, where there are still not many books. Young people are tired of videos. They want books, easy books which they can understand without much effort. There is a certain joy in reading which a video or a film wouldn’t give.

SOM:  What’s your advice for those authors who would like to be in your shoes?

Chetan Bhagat: Why would anyone want to be in my shoes? Be yourself. I didn’t want to be another Arundhati Roy or Salman Rushdie. Tomorrow’s authors would be different, it wouldn’t just be about writing books. It would be about videos, blogs and much more.

SOM: You’re an actor, columnist, motivational speaker, writer and even a reality show judge? Which role do you like the most?

Chetan Bhagat: I like them all. I enjoyed acting (acted in ‘Decoupled’). It was fun but no one hires me now. It’s great to experience many things in life.

SOM:  Do you get time to read?

Chetan Bhagat:  I force myself to read at least one book a month. Currently I am reading a book on neuroscience  titled ‘The Molecular Mode’ which talks about the brain circuit, how it works, why some people are self-motivated and some are not. Reading is important for writers. It’s a craft which they need to polish constantly. Reading keeps you in that zone. On the other hand, there is no creativity in watching reels. It rusts your brain.

SOM: Do you think it is easier for authors from metros to make it big when compared to those in small towns like Mysuru?

Chetan Bhagat:  In times of social media, location doesn’t matter. The author has to carry the publicity burden on himself. Even big publishers wouldn’t promote the book for you. When I wrote my first book, its review was published in ‘India Today’, which was a huge thing but these days it doesn’t matter as much. It matters more if a social media  influencer covers you. You can be in Mysuru or anywhere else and you can still be successful. The mindset has to change, every business has to have an online strategy. Every writer has to have an online presence. Learning the ropes on social media is a different skill but you have no choice but to do it.

SOM:  What’s the typical day in the life of Chetan Bhagat?

Chetan Bhagat:  I love my two hours of morning coffee time when I think a lot about how I can improve myself. It needn’t be anything big, just small but significant things, followed by writing, any admin work, paying taxes, kids and family time. Family support matters but ultimately you are on your own. Your journey is your own, that’s why in Vedas they talk about detachment. Don’t count on anyone’s support.

SOM:  You are surrounded by controversies. Do they come to you on their own or you invite them?

Chetan Bhagat:  Not always. Earlier I used to comment about politics but I have cut that too. Politics is bad, one should never talk about politics or even religion. People are sensitive about these two subjects.

SOM:  Would you join politics?

Chetan Bhagat:  Once upon a time politics interested me and I wanted to join but not now. Change attracts me and joining politics is one way of changing your country but it’s too much hard work. Politicians in India work 24×7,  have zero privacy and zero family life. Shashi Tharoor once told me he attended eight weddings in a day. Even if he would go only for five minutes, he has to show his face. Apart from this, there is Constituency and Parliament work.

SOM:  From where do you get ideas for your novels and is it easy to be a published author these days?

Chetan Bhagat: Through my travels. In addition, I post motivating videos and read the comments about failure, heart breaks which gives me a base and good material for my stories. These are tough times for authors, it’s difficult to get traditionally published these days but e-books, self-publishing, blogging, insta posts are opening many avenues for authors to get published. So why limit it to books?

SOM:  Are you a pantser or a plotter?

Chetan Bhagat:  I am a plotter, especially for thrillers and mystery novels, you have to have the entire plot ready though it looks organic. Sometimes the story changes as I go along.

SOM:  Who is your favourite author?

Chetan Bhagat: I love R.K. Narayan’s books. I would surely pass by his museum and take pictures. I have a flat in Mumbai that can even be made into a museum.

SOM:  Who is the real Chetan Bhagat?

Chetan Bhagat: I like to constantly work on my internal growth. I have many friends who are super rich but they are not necessarily happy. People have external growth like accumulating wealth, earning titles but they fail to work on their internal wealth which is very important for happiness.