Home » Feature Articles » Exclusive interview with Sadhguru Jaggi Vasudev: ‘We have a limited time on this planet’ 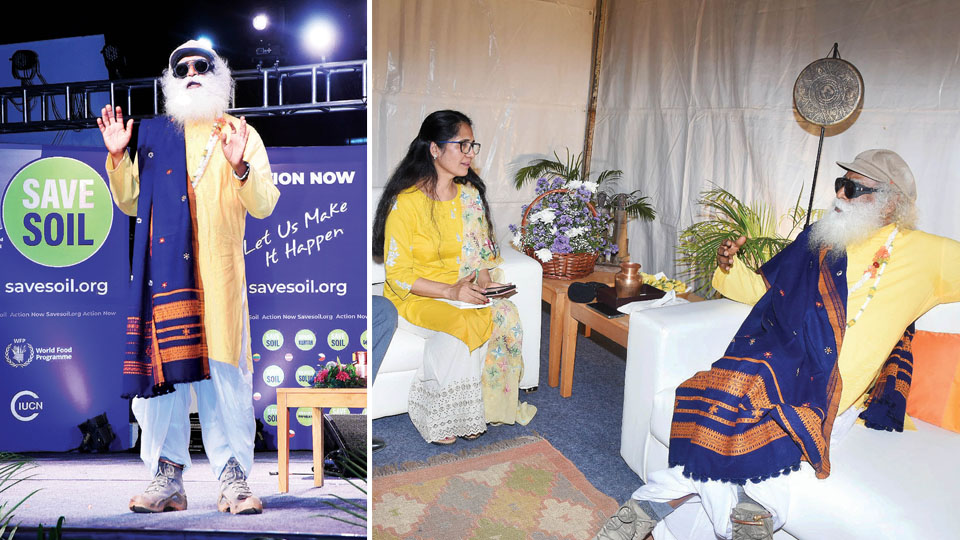 Exclusive interview with Sadhguru Jaggi Vasudev: ‘We have a limited time on this planet’

Sadhguru Jaggi Vasudev, Mysuru’s very own guru recently travelled over 30,000 km visiting 27 countries on a solo motorbike trip to spread the message of saving soil. This 100-day journey which kicked off at Trafalgar Square in London concluded in Mysuru on June 19 where he arrived on his motorbike and addressed a massive gathering at Manasagangothri Open Air Theatre. Star of Mysore’s Sujata Rajpal spoke to Sadhguru after his address. Excerpts:

Star of Mysore (SOM): You have a long association with Mysuru. Which is the one thing that you don’t want to change about this city?

Sadhguru: There is a quaintness about Mysuru. The city has a unique aura which we must preserve at any cost, and not allow it to become a hustle-bustle place like any other high-rise city. We have already done a lot of harm to this city but let’s try to preserve its charm as much as possible.

SOM: Recently we celebrated Father’s Day, then there are other such days dedicated to various relationships. What are your thoughts on this?

Sadhguru: Only one day for fathers? (Chuckles). This is a commercially pushed, Americanised way of life. There are days dedicated to various persons then which is the day for a normal human being? Indian relationships are different but unfortunately, we too have succumbed to this. Even in India, Father’s Day and Mother’s Day cards are sold, and restaurants offer special discounts to lure you to spend time with your family.

If you have love in your heart for your father or mother then why just one day? We should think of someone out of love, and duty, and not because it is an appointed day for that particular relationship.

Sadhguru: This is the first generation that is facing such a problem. Because of employment, most young people have to move away from the place where they were raised. They can’t carry their parents with them even if they want to. In many cases, even parents are not willing because they are comfortable in their surroundings. After a certain age, their ability to adapt and adjust diminishes unless they are vagabonds like me (chuckles). My father lived in Mysuru and I would visit him whenever I could.

Of late, a lot of private properties exclusively for senior citizens have come up but it would be great to have a city for senior citizens where the elderly can live safely and move around freely. Such a city should be self-sufficient in every way so that one doesn’t have to step out unless one wants to. I have proposed a concept where on a 50 acre land a building is built in just one acre and the rest 49 acres is forest. I don’t know if it is feasible but this would be an ideal situation for the elderly.

SOM: How is the childhood of today’s children different to the previous generations?

Sadhguru: Today when kids step out of the houses, they are literally on the road as there is no place for them to play and jump around. For the holistic development of the child, it is important that they play freely but these days it is not possible for them to do so. What is childhood if one has not climbed the trees and done crazy things? We have already done a lot of damage to our children, and in the future, we would have to pay a heavy price for this. Due to the enclosed atmosphere children live in, in the next 15-20 years, the psychological issues would spike up which wouldn’t be easy to deal with.

SOM: How can we make our women empowered in the true sense?

Sadhguru: The laws are equal for both men and women. Society is in a transition stage. Earlier, women took care of the house whereas men earned outside but now even women too are working. They are all over the place. There is nothing wrong or right about it, it’s just the requirement of the time. The entire nation is in transition, so there are bound to be transitional issues. Academically, girls are doing better than boys. So, in the next twenty years, things would be different. Just wait and watch for women to bloom and take their place in society which they truly deserve.

SOM: How should we address today’s digital distractions and addictions?

Sadhguru: People are addicted to phones, tea, gossip or anything. Addiction means you are unconsciously ruled by something else. There is no substitute for being conscious. If we are not conscious, we would destroy ourselves. A conscious planet is a solution for all our miseries. If we say, the world should become conscious, we are referring to the consciousness of individuals. In this direction, we have opened a Conscious Planet Centre at Harvard Medical School where we are exploring how raising human consciousness can augment healing and recovery.

SOM: These days there are a variety of diets. People are confused. How do they decide which diet is good for them?

Sadhguru: People must eat food not something weird prescribed. I am coming out with a food book so I don’t want to talk about it. (Chuckles). Earlier most people ate ragi, jowar or other millets but now we are eating mainly white rice. Ragi, which is considered poor man’s food, is actually the best cereal.

This year has been declared as the year of millets but millets don’t attract people who are mentally stuck to impressing by eating super white rice. Such an attitude needs to change. In earlier times we used to eat well but we didn’t have sufficient to eat. Now the food production has increased and so has the population. My great grandmother lived up to 113 mainly because people those days consumed mainly millets.

These days there are fashions about food which keep changing. Not only what you eat but also how you eat is important. Too much concern about health is in fact an ailment. We should live with ease. We are born and would die one day so why generate acids in our heads.

SOM: How do we achieve eternal happiness?

Sadhguru: Human beings are not eternal so how could they get eternal happiness? Your life is a ‘pop-up’ and you would ‘pop-out’ one day.

We have a limited amount of time on this planet but unfortunately, we think we are here forever. If we know our life is slipping away we would organise ourselves better and make our time more productive. Becoming conscious of our mortal nature is of utmost importance which would help us make our life better.