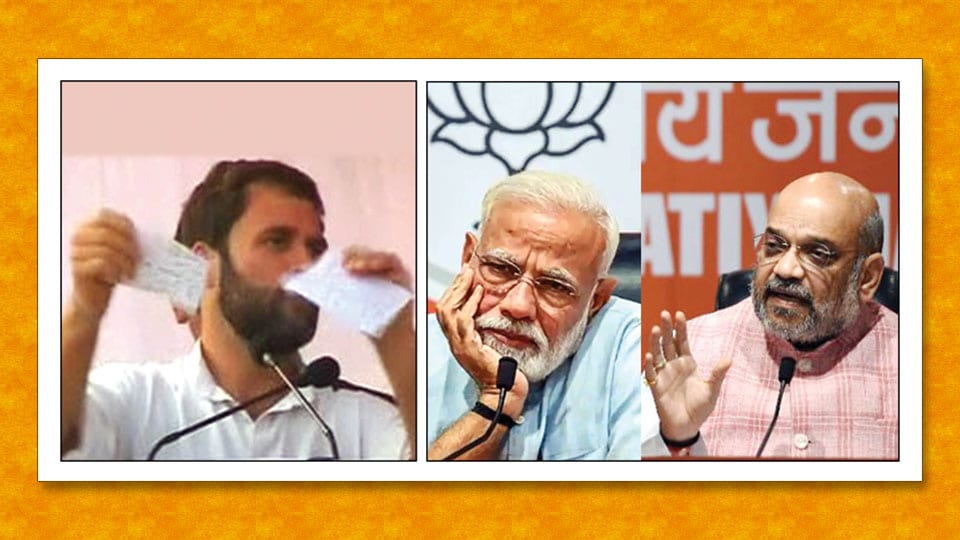 Press Conference: Who needs it ?

Yesterday Prime Minister Narendra Modi joined BJP President Amit Shah at a press conference called by the latter. Many of us hoped the journalists would ask him questions and PM Modi would destroy those questions with élan, deploying his abundance of confidence, cache of facts and inimitable sarcasm but nothing happened !

All we got to see was the body language of our PM. He was resting his face on his hands, he caressed his lips a few times, he folded his arms, but mostly he was just looking from left to right — once at the journalists asking the questions and next at Amit Shah who was answering them, it was like he was watching a tennis match — left-right, left-right. It was terribly disappointing.

Press conferences are important in a Democracy to communicate with the citizens directly not allowing any misinterpretation between the question and the answer by the media. It is also used to make a “statement” and garner publicity. Sometimes you may win applause and sometimes may end up embarrassing the party.

Many may recall how Rahul Gandhi tried to make a statement that he was honest and different than the old Congress guard but it went awry? It felt so “set up” because while the then Congress Spokesperson Ajay Maken was sitting at the press conference defending the Congress-moved ordinance aimed at over-turning a Supreme Court order that stated elected representatives convicted and sentenced to over two years in prison will be disqualified immediately. Then his mobile phone rang. He excused himself and in full view of the press, answered the phone. He then got back to his seat and sat quietly.

Even before the press could ask what happened, Rahul Gandhi barged into the press meet, took a seat next to Maken and screeched, “My opinion is that the ordinance is nonsense and should be torn up and thrown out.” He then dramatically added, “I will repeat it for you, my personal opinion about the ordinance is that it is complete nonsense, it should be torn and thrown away.” He later took a copy and tore it! We thought someone would scream “Cut” to end this drama. In the end, Ajay Maken, Congress Spokesperson, looked like a Congress Spooked-person and Rahul Gandhi was seen as being erratic, a quality a leader should not have.

This is not the first time that leaders become indifferent in press conferences or go overboard. Noted author and columnist Khushwant Singh wrote about an incident that happened when he was the Indian Press Attaché in England.

It seems, when former PM Nehru visited London, Khushwant Singh had arranged for a lunch meeting with editors of leading British newspapers. Khushwant writes, “… Halfway through the meal, Nehru fell silent. When questions were put to him, he looked up at the ceiling and did not reply. He proceeded to light a cigarette while others were still eating (which is bad table etiquette). To make matters worse, Krishna Menon (Indian High Commissioner to Britain) fell asleep. The editors left before the coffee was served. It was a disastrous attempt at public relations.”

Nehru was very media-savvy but failed to perform on this occasion probably because he was upset with journalists for publishing a photo of his late night visit with a caption reading: “Lady Mountbatten’s midnight visitor” in that day’s morning newspapers. We wonder what Krishna Menon’s excuse was for napping ! Sentry duty perhaps?

So Nehru did not answer questions fielded by international journalists because he was being petty but this may have affected our country because his answers mattered at a time when India had to impress global leaders as we were seeking international aid.

So we have to ask, if the Prime Minister did not want to answer questions, why was he at the press conference at all?

Was it a campaign strategy? Because the Election Commission (EC) had stopped all campaign activities and with Sunday being the last voting day, a press conference would be  a good place to show face to the voters and talk about their achievements without being reprimanded by the EC.

Now, if Rahul Gandhi, who often ends up with his foot in the mouth, has confidence to face the press and handle the critics, why not a confident and more experienced Modi? After all, Modi has handled all the hard questions numerous times, so why then this reluctance? Just do it and shut the naysayers once and for all.

Press conference is an indicator of a healthy Democracy where the leader of the nation is confident enough to take on any question and justify his decision. It is also a confidence-building measure — You see your leader’s body language, clarity of thought and speech, based on which the people will get a sense if they are in good hands or it’s time for government to change hands.

Unfortunately, we didn’t get to see this yesterday and let’s hope he has not set a new precedent for future governments.