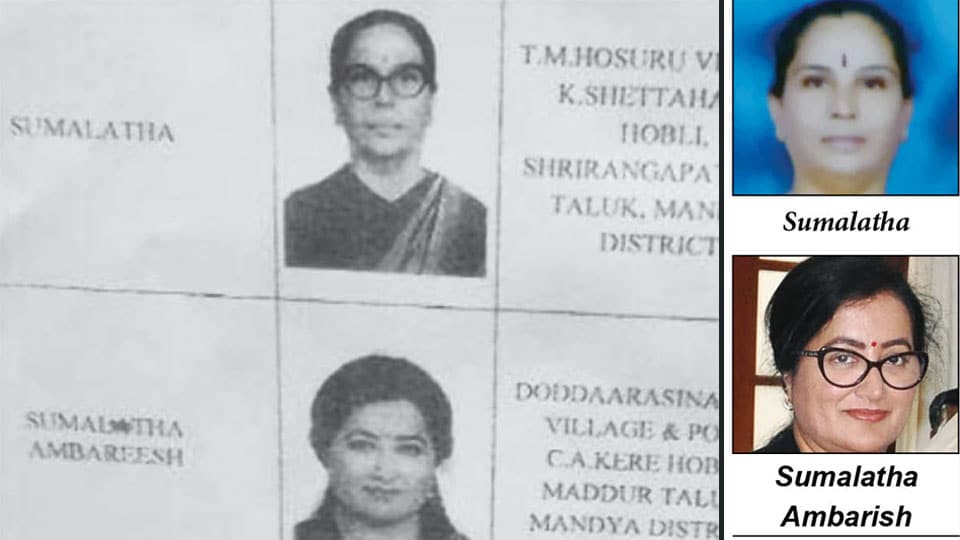 Fans of Sumalatha Ambarish cry foul; say it is an attempt to fox voters

Mandya: Lookalikes of leaders are a definite crowd-pullers especially during the time of elections where these lookalikes travel far and wide enjoying the limelight and at the same time attracting people.

The Mandya ‘Sugar Bowl’ is witnessing a high-pitched battle between Sumalatha Ambarish, wife of former actor and Minister late M.H. Ambarish, who is vying to inherit her husband’s political legacy and Nikhil Kumaraswamy, son of Chief Minister H.D. Kumaraswamy, who is looking to make a political debut, banking on his father’s and granddad H.D. Deve Gowda’s popularity.

There are 22 candidates fighting to be Mandya MP and Nikhil Kumaraswamy’s name figures first in the order of names in the EVM list.

Fans of Ambarish and supporters of Sumalatha Ambarish have alleged that after fielding three Sumalathas, the rivals have introduced a “make-up Sumalatha” to fox the voters. They said that Independent candidate Sumalatha, whose name figures in No. 19, has been dressed up in such a fashion that she resembles very much like Sumalatha Ambarish.

Handing out the photo to reporters, Ambarish fans alleged that Sumalatha has been dressed up with close-neck three-forth sleeve blouse with black-frame spectacles (the way Sumalatha Ambarish dresses). After make-up and photo shoot, Sumalatha’s photo has been inserted in the EVM, they said.

“This is nothing but a conspiracy to confuse voters who are mostly from the rural background. To counter this, we are educating voters to make expose their ploy,” say Ambarish fans.

Meanwhile, reacting on her lookalike’s photo figuring in the EVM, Sumalatha Ambarish said that her rivals have adopted unscrupulous means to defeat her. “There is no end to this,” she quipped.