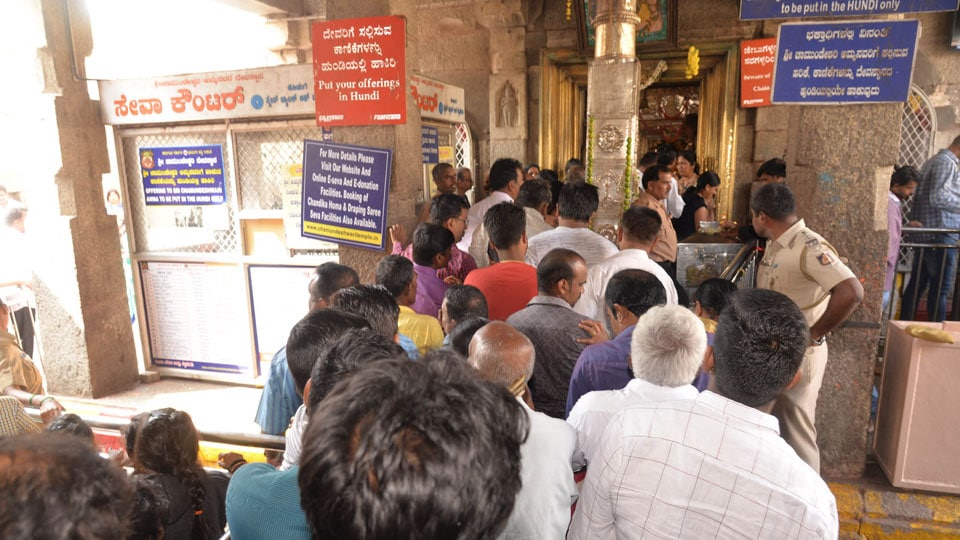 Mysuru: Over 250 priests, permanent and temporary employees of  Sri Chamundeshwari Temple and other temples atop the Chamundi Hill, 18 Palace Temples and Tripurasundari Jwalamukhi Temple at Uthanahalli began their indefinite strike this morning.

The strike is being spearheaded by the Employees Association of Chamundi Temple, Palace Temples and other Temple Clusters in city. The employees and priests manage services at over 23 temples.

Chaos prevailed at the Chamundeshwari Temple atop the Chamundi Hill where hundreds of tourists had arrived. Today being a Friday, over 30 buses carrying devotees had come to have the darshan of presiding deity Goddess Chamundeshwari. Following the strike by priests and other allied staff, puja rituals were severely affected and the Temple Complex was taken over by the Police and private security guards. 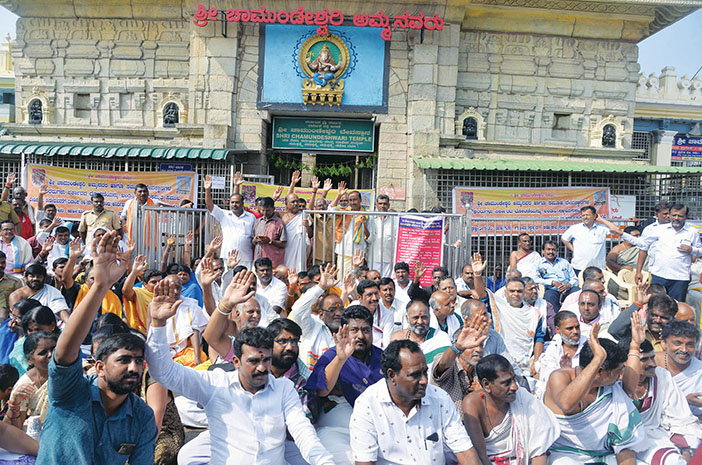 There were no special ticket counters and all the devotees were allowed entry through the main gate and two lines were formed. Devotes were not allowed entry to the sanctum sanctorum and were stopped near the Garuda Sthamba.

There were no puja rituals and the Policemen and the security guards were seen pushing the devotees to finish the darshan fast. This irked devotees and some of them quarrelled with the Police. After performing their first puja as early as 5.30 am, priests squatted in front of the temple and shouted slogans against the State Government.

What began as a small strike grew big as hundreds of devotees made a beeline to have  darshan. Cops had a tough time in controlling the crowd as there was only one entry and one exit to the Temple.

People who had come from faraway places to fulfil their vows including donation of sarees to the Goddess were confused as there was no one to receive the offerings. Some of the devotees were seen dumping the offerings, flowers, oil and coconut next to the Garuda Sthamba. Many dumped the offerings and puja materials outside the temple also and at the area where bhajans are conducted.

The protesting priests said that they will continue their agitation till the government fulfils their demands.