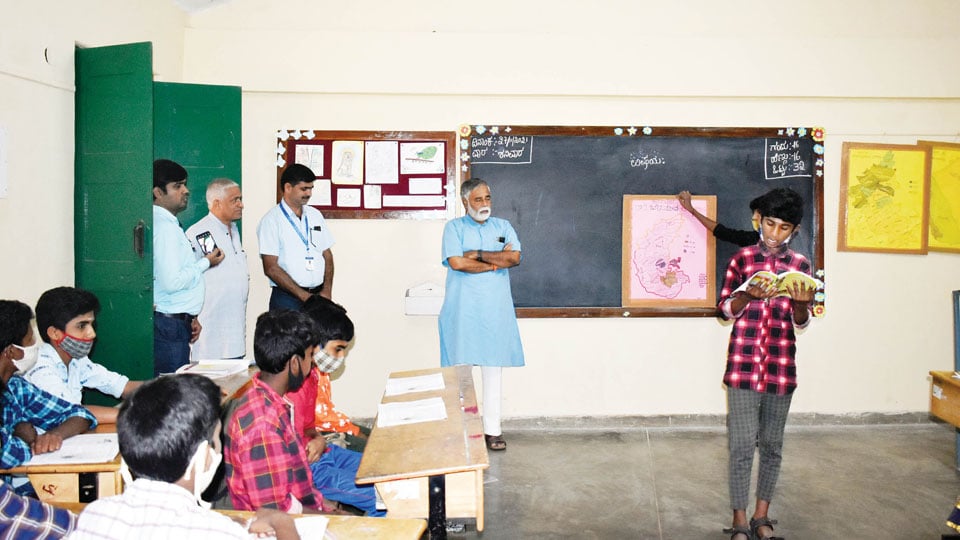 First he visited SVYM’s Viveka Tribal Centre for Learning (VTCL) at Hosahalli and experienced the forest-based school, its open classrooms where students learn through experience and textbooks.  He was happy to learn that 525 students are educated as per the curriculum and provided skill training through various programmes and the IBT (Introduction to Basic Training) centre of the school.

The Minister said that his tedious journey on bad roads leading to VTCL was forgotten as soon as he entered the pristine environment of the school.

He lauded Dr. R.  Balasubramaniam, Founder, SVYM, for realising Swami Vivekananda’s dream through VTCL where a bright future is created through holistic education.

School Principal apprised the Minister of the difficult task of getting children from the community to school and ensuring their retention.

Stating that many recommendations of the National Education Policy-2020 have already been adopted in VTCL, the Minister appreciated the fact that they are being implemented well.

SVYM’s Head – Education Sector, S. Praveen Kumar briefed the Minister on adopting the recommendations of NEP-2020 in not only Schools run by the organisation but also in Government Schools where SVYM has interventions.

He then visited SVYM’s  Viveka Rural Learning Centre at Kenchanahalli, where he was apprised of all the different trainings imparted to rural women and youths.

He also visited SVYM’s Viveka School of Excellence, Saragur, Viveka Pre-University College, Saragur and the Science Exploratory Park at Saragur, a first-of- its-kind park where students are made to explore and discover science for themselves first and later taught the formal way.

SVYM is a development organisation engaged in building a new civil society in India through its grassroots to policy – level action in Health, Education and Socio sectors for 37 years. SVYM works in all the districts of Karnataka and touches the lives of over 3 million people.