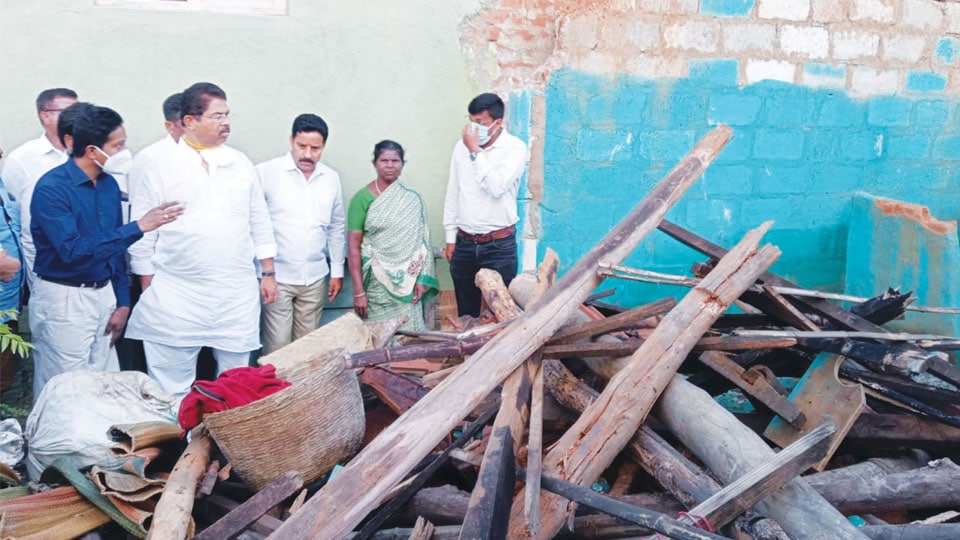 Mysore/Mysuru: Revenue Minister R. Ashoka visited Lakshmipura in Mysuru taluk yesterday where extensive damage has been caused to houses due to incessant rains. He met the families that have lost houses and directed the District Administration to disburse compensation immediately.

After a house collapses, an immediate relief of Rs.1 lakh has to be paid and the remaining money can be paid after completely assessing the damages. He claimed that Rs. 318 crore has been disbursed as compensation across the State wherever houses have been damaged and wherever crop loss have occurred.

He said that the role of middlemen in providing relief has been eliminated and after the paperwork done by the village, taluk and district authorities, the money is directly credited to the bank accounts of the victims.

All Deputy Commissioners (DCs) have been asked to release timely payments to people affected by rains and floods, he said, adding that DCs of all districts have Rs. 681 crore in their personal deposit accounts.

Rs. 5 lakh compensation would be paid if a house is completely razed to the ground. Earlier, Rs. 3 lakh was being paid for this and now the money has been increased to Rs. 5 lakh, he revealed.

The memorandum seeking compensation under the National Disaster Response Fund (NDRF) norms will be submitted in three to four days. According to preliminary data, the recent deluge has resulted in 26 people losing their lives, 5.81 lakh hectares of crop loss and 2,339 km of damaged roads.

Officials say these figures have been updated and are being compiled. Karnataka received 142 mm rainfall in November against the 39 mm it gets on average, which is nearly a 263 percent deviation from the norm.

Pointing out that the Government has so far released a crop loss compensation of Rs. 318.87 crore to 4.61 lakh farmers, Ashoka said, “Earlier, it used to be paid once a month or once in three months. We have introduced a new system to pay input subsidies to farmers. We are now making immediate payments in instalments that are released once every three or four days.”

On COVID and the imminent threat of Omicron, the Minister said that the Mysuru District Administration has been asked to be ready with 2,000 beds including 1,720 oxygenated beds and ICU beds to handle the rush in case there is an outbreak.

During the first and second wave, there were only 100 to 150 oxygenated beds in Mysuru and this has been increased to 1,700 to face future outbreaks, he claimed.