Home » News » Tusker Kusha heading back to Dubare from Bandipur 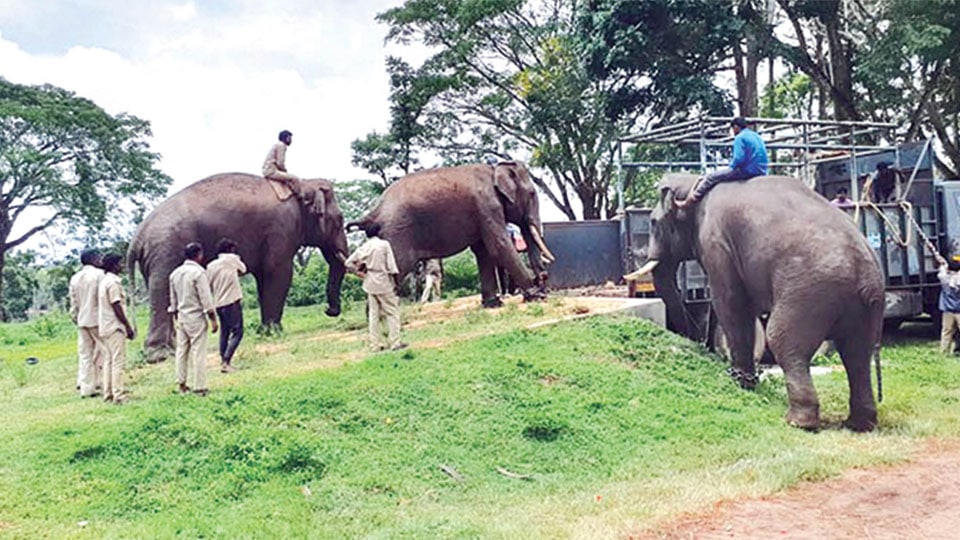 Tusker Kusha heading back to Dubare from Bandipur

Kushalnagar: Kusha, the wild-captured-tamed-recaptured elephant from Dubare Elephant Camp in Kodagu that was released into the Bandipur Tiger Reserve in June this year after a relentless campaign by animal lovers and following the intervention of former Union Environment Minister and sitting MP Maneka Gandhi is heading back to Dubare, its home turf.

He has already travelled 200 kilometres and has reached Nagarahole National Park. He is likely to take the Thithimathi-Maldare route to reach Dubare. The tusker was radio-collared and released into Bandipur Tiger Reserve in June. Kusha’s movement is being tracked by project scientists from Wildlife Institute of India (WWI) at Dehradun.

Though Kusha’s release was welcomed by conservationists, they are not happy with the fact that he was released in Bandipur, a territory that is unfamiliar to him.

Speaking to Star of Mysore this morning, sources from WWI said that Kusha’s movement is being closely watched. In six months, from Bandipur, Kusha travelled to Wayanad and now he is at Kabini range of the Nagarahole National Park. Elephants are known to migrate across 350-500 sq. km. annually.

“It has not directly headed towards Dubare and it is not a ‘homecoming’. However, the tusker is travelling and has reached Nagarahole now. It may come to Dubare or may not. But its path cannot be visualised now at this moment. Maybe after some months, we will know,” the source said without wishing to be named. Once it is back in Dubare, it is up to the Forest Department either to relocate it or to retain it in Dubare, the source added.

The 29-year-old jumbo was released at Moolehole Range of Bandipur Tiger Reserve, more than 150 kilometres from Dubare. He was radio-collared and was transported on a quick action force elephant truck.

Kusha was captured by the Kodagu Forest Department four years ago from Chettalli along with another elephant named Luv. After taming him at Dubare Elephant Camp, he was put to routine work of the Department for over three years. However, he escaped from the camp when he was in ‘musth’ and was traced after more than one year along with a mate. He was recaptured and brought to Dubare and was re-tamed months back. Following a hue and cry and ethical questions over Kusha being separated from his mate and the intervention of Maneka Gandhi, the Forest Department ordered the tusker to be released after radio-collaring.

Nagarahole Project Tiger Director D. Mahesh Kumar told SOM that they do not have the radio collar tracking mechanism and the facility is available only in Dehradun. “Yes, we have information that Kusha reached Nagarahole last week and so far we have not sighted him. We will act as per the information provided by the Dehradun team,” he added.