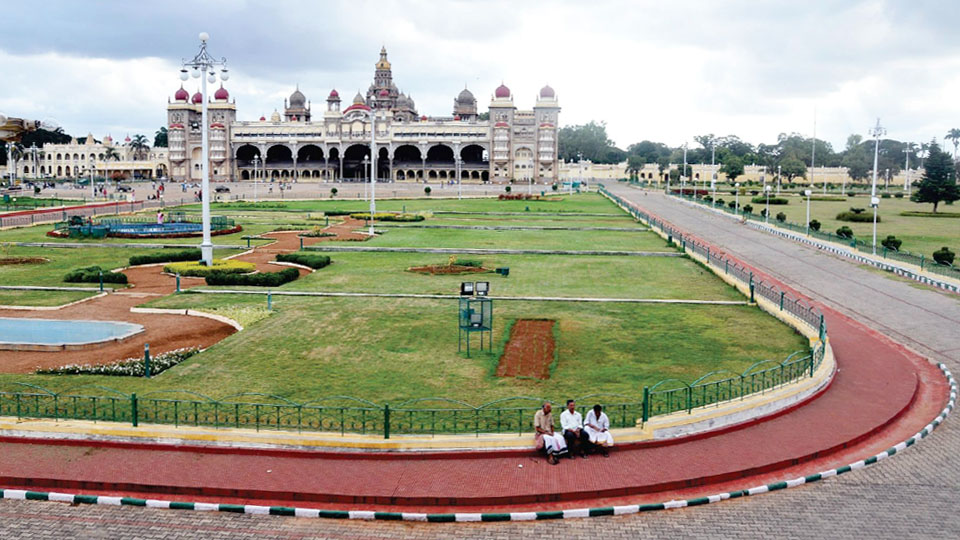 Mysuru: Despite several reminders to the City Police to tackle the menace of hawkers and roadside vendors outside the Varaha Gate of the Mysore Palace falling on deaf ears, the Mysore Palace Board has taken a decision to strengthen the security inside the Amba Vilas Palace on its own by setting up a private security system.

Deputy Commissioner D. Randeep, who is also the Palace Board Chief Executive Officer, has taken this decision in the interest of security to the world famous Palace and thousands of tourists including foreigners visiting it. Initially, 30 private security personnel will be posted at the Gates from August 10.

In the first stage these security personnel will be posted at the Varaha Gate and in the parking area outside the Palace. Two counters are being opened at the Palace Board Administrative Office inside the Palace for their convenience.

The hawkers selling various handicraft items, Mysuru, is known for, are creating a nuisance and also harassing the tourists. Randeep had written a letter in this regard to the City Police Commissioner, adding that, this is also marring the beauty of the Palace and directed him to put a stop to the menace.

When the Palace Board Deputy Director T.S. Subramanya made an enquiry about this, it was found that a few of the hawkers had identity cards that had the stamp of Mysuru City Corporation (MCC) and it was issued by one Manju after collecting a fee. This issue was also mentioned in the letter to the Police Commissioner asking him to take action against Manju.

The Devaraja Police and the Garuda Patrol, instead of taking suitable action, had washed their hands off stating that action could not be taken against the hawkers with identity cards. This action of the Police is a cause for concern, the DC has stated in the letter.

However, the MCC Commissioner, based on the letter to the Police Commissioner, investigated the matter and recovered the identity cards. In spite of all the exercise, the roadside vendors and hawkers continue to occupy the place outside the Palace Gate and near the parking lot causing inconvenience to the tourists. They are also fleecing them.

The DC, viewing the Police negligence into the matter seriously, has taken a decision to set up a separate private internal security wing leading to suspicions about the workings of the Police.

“In the interest of the security to the Palace and protection to the tourists, DC Randeep who is also the Chief Executive Officer of the Palace Board has taken a decision to set up a private security wing,” said  Deputy Director T.S. Subramanya.