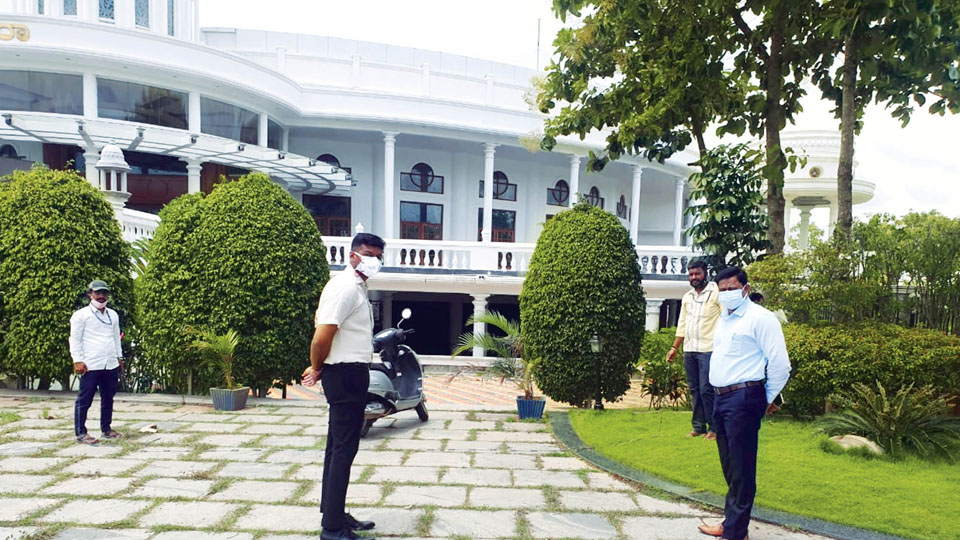 The Choultry is owned by JD(S) MLA from K.R. Nagar S.R. Mahesh (registered in the name of his wife Anitha Mahesh) who has landed in a controversy after former Deputy Commissioner Rohini Sindhuri said that the Convention Hall has been illegally built on the Raja Kaluve (Survey No. 130/3 Dattagalli) and it stands on Survey Number 123 that has been demarcated as Government Gomala land. A probe has been ordered against the illegality, she stated.

Apart from the Choultry, the IAS Officer said that illegalities

have also been committed at Survey Number 124/2 at Lingambudhi village, Survey Number 115 at Kergalli village and Survey Number 123 at Dattagalli. These allegations have turned the heat on the MLA and the RC has ordered a physical survey of only the Choultry land — based on the MLA’s memorandum to him — to find out if there are any violations.

The investigating team conducted the survey of land especially the four corners of the compound of the Choultry and adjoining lands. The survey was conducted on the four-acre land where the huge Choultry stands. The sides of the Choultry, the vacant site near it were measured and surveyed and compared with the Revenue Department records and also with RTC and Aakaar Bandh (root land document), alienation documents and others.

Interestingly, Rohini Sindhuri has said that the root land document mentions that the Choultry stands on Gomala land and it cannot be a private property. There are no proper documents to establish that the Government land has been transferred to private parties and the land conversion has been made using fabricated and false records.

However, sources said that the investigating team found the passing of a Raja Kaluve on the vacant site next to the Choultry. The report will also ascertain whether the Choultry has been built on the buffer zone next to Raja Kaluve.

The survey will determine whether the Choultry has been constructed within the permissible area and if it conforms to the norms issued by Mysuru Urban Development Authority (MUDA). The officials will match the findings with Urban Property Ownership Record (UPOR) and also tally with previous records.