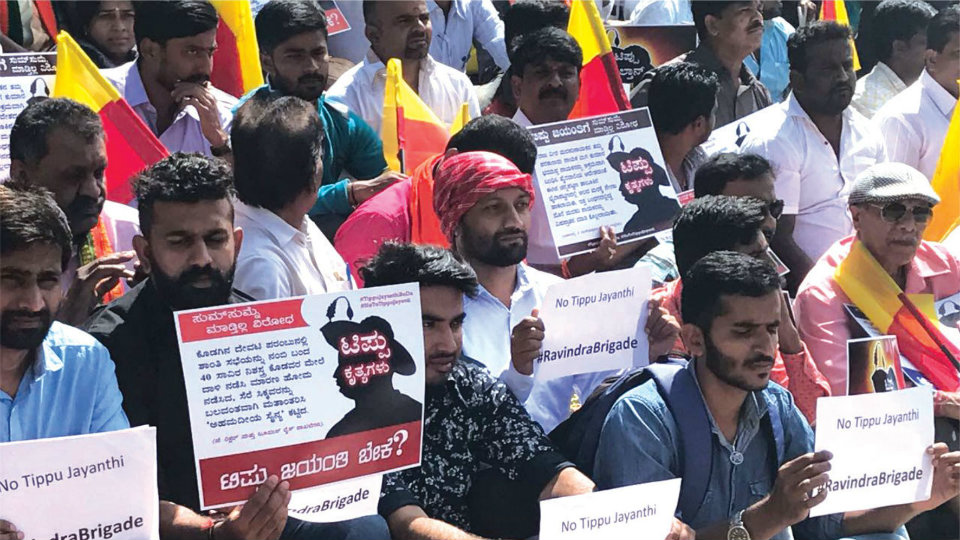 Over 300 members of the Samiti demonstrated in front of the DC’s office here. They alleged that the Government was hurting the sentiments of people by going ahead with the Jayanti. A memorandum was submitted to Additional DC M. Sathish Kumar.

Virajpet: A protest rally was taken out through main thoroughfares of the town. An effigy of Tipu was burnt on the road and protesters shouted slogans against the Government. A memorandum was submitted to Tahsildar R. Govindaraj.

Kushalnagar: Members of pro-Hindu organisations staged a protest in Kushalnagar. They alleged that the Government was going ahead with Tipu Jayanti only for vote bank with no sanctity behind the celebration.

Kodagu District BJP wing has warned the District Administration and Police of repercussions if the Government goes ahead with Tipu Jayanti on Nov.10.

Briefing the Press, District BJP President Bharatish opined that 90% of people were against the Jayanti. He alleged that the Congress Government was just utilising the situation to gain political mileage to woo voters.

In the meanwhile, the High Court, which refused stay on Tipu Jayanti appealed through a Public Interest Litigation (PIL) filed from South Kodagu, has issued a notice to the State Government to reply to the PIL within four weeks.

Tipu Jayanti
Why sound while on beat?
Exemplary service at RTO West