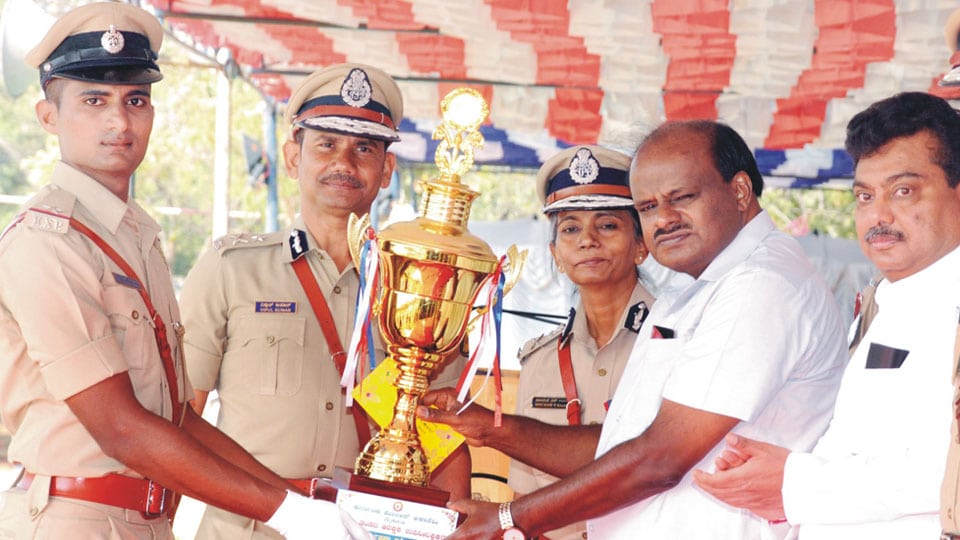 Mysuru: The Passing out Parade of the 41st batch of Police Sub-Inspector (Civil) Probationers from the Karnataka Police Academy (KPA) held at KPA premises this morning was an event to remember. First, Chief Minister H.D. Kumaraswamy himself was the chief guest, second, the event was webcast live from KPA and third, there were many highly qualified candidates who have entered the Police force including 56 engineering degree holders, one M.E. and two M.Tech degree holders.

In all, 287 candidates entered the Police force and Belagavi had the highest number of candidates (35), closely followed by Bagalkot (28). There were 12 probationers from Mysuru and 7 from Mandya. Among the 287 probationers, 50 were women. Their training commenced on 12.2.2018 and the Probationers have undergone 47-week training including training in field and operations for 28 days.

In all, there were 10 teams that marched past at the event and presented the Guard of Honour to the CM. The overall Parade Commander was Tippu Sultan Nayakwadi from Haveri District. Other Unit Commanders were Anand Manshettar, N.K. Rajesh, Santosh Kumar, Prakash Kanajere, G. Shruthi, Akhashtha Kurugundi, Harinath Babu, Kiran Raj, B. Shiva Shankara and Nabisa Walika.

Addressing the probationers, Chief Minister H.D. Kumaraswamy said that it was the second time that he participated in a Passing out Parade at KPA. He called upon the PSIs to protect the lives and properties. “Help safeguard the health of the society and don’t succumb to any political or financial pressure. Don’t lobby for plum postings and be a role model in the society,” he said.

“The web-streaming was a success and henceforth, we will do it for every passing out parade,” he said. KPA has a dedicated website and it is also exploring technology. Earlier, tutorials with audio and video contents, animations and texts were introduced and now, technology is being adopted, he added.

Wide-range training: The trainees have undergone a wide variety of training so that it would be easy for them to face real-life situations. Apart from activities including literary clubs, current affairs club, social service club, law club, sports and adventure club, cultural and computer clubs and film and photography club, the trainees have had many practical exposures on handling situations in a natural disaster.

They were taken to flood-and-landslide-ravaged Kodagu and were made a part of relief and rescue operations. They were also taken to places including Malnad and Karkala to learn the operations of Anti-Naxal Force.

Apart from training the probationers from within the State, the KPA also has the credit of training Police personnel from Maldives and Bhutan in collaboration with the Bureau of Police Research and Development and the Ministry of External Affairs.