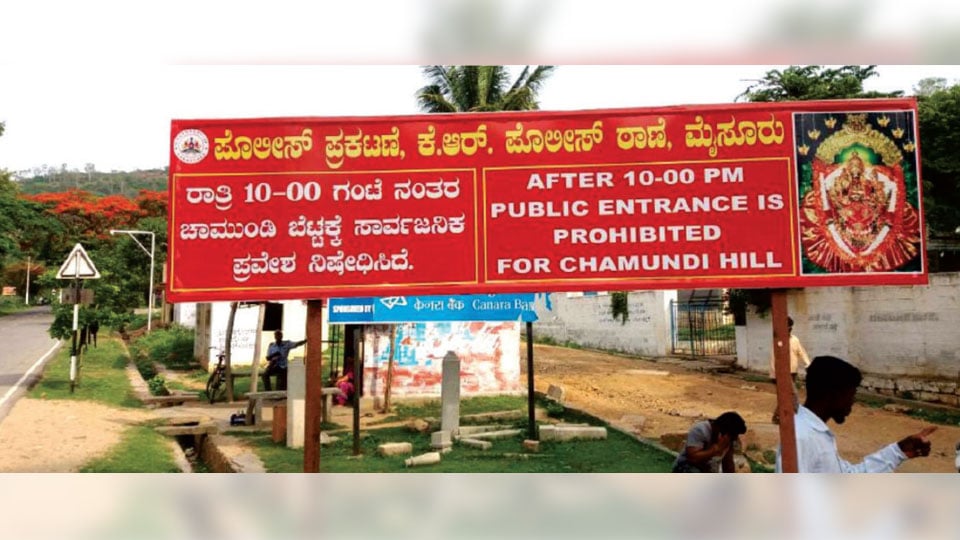 Mysuru: The District Administration has enforced a ban on entry to Chamundi Hill from 10 pm. With the implementation of the rule, jolly night rides on two-wheelers and four-wheelers up to the hill have now become a thing of the past.

Following a directive from the District Administration, the K.R. Police have set up a board at the entrance of the hill that says public entry to the hill has been banned. Very soon, the Administration will set up gates to prevent entry.

Driving up to the Hill was a favourite ‘unwinding activity’ for people, especially youth who used to admire the scenic beauty of Mysuru from the top of the Hill. But of late, people used to drive up the Hill in the middle of the night and indulge in drinking, dancing and other illegal activities.

Following a series of complaints against this revelry, the District Administration, two years ago, had restricted the entry to the hill after 11 pm. However, the number of people coming in vehicles after 11 pm increased. The issue was raised at a meeting of Chamundi Hill development in February this year, where the authorities felt that there was a need to enforce the night ban to preserve the sanctity of the Hill.

Speaking to Star of Mysore, Deputy Commissioner of Police (Law and Order) Dr. H.T. Shekar said that the ban was necessary as the night entry caused a serious law and order problem and also resulted in many accidents. “The process of setting up gates at the entrance to prevent vehicles from entering the Hill beyond 10 pm is already on and very soon, we will have the gates. To stop illegal activities, we will increase patrolling,”   he said.

There are three main roads that lead to Chamundi Hill. One road is from Tavarakatte, the second leads to Nandi statue and the third entry is from Uttanahalli Road. The DCP said that gates would be set up at the entrance of all the three roads. CCTV cameras would be installed at the gate entrances as additional security measure. Apart from entrances, the Hill will have additional cameras to prevent illegal activities, he added.

Muzarai Tahsildar S.N. Yathiraj Sampathkumaran said that the night entry ban will not affect the residents of Chamundi Hill. A survey of the residents and the vehicles they own will be conducted soon and passes will be issued to them so that they can have hassle-free entry, he said.