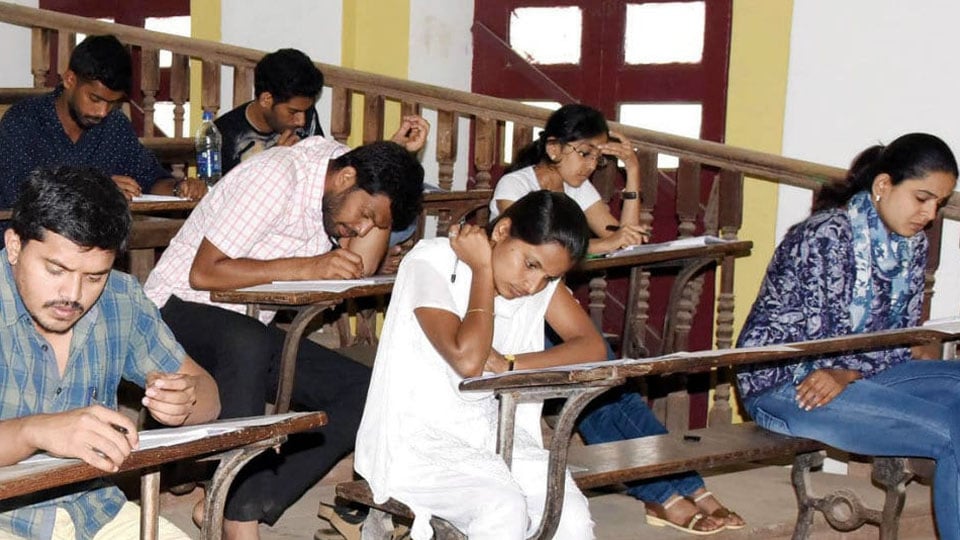 The year was 1965 and I was a student of the seventh standard at St. Mary’s English Middle School. The academic year started with everyone I met cautioning me that I was now laden with the responsibility of facing a public examination. My parents, relatives, teachers and even Khader, the dark and lanky boy whose job it was to escort me to school and back every passing day and who had himself never seen the inside of a classroom, were among those who tried very hard to put the fear of this important turning point into me.

But although as a little boy who should have been fearful of all such prophecies, I remained quite unperturbed about how all that would make any difference to me. The year went by quickly and a month before the examination, we were issued our hall tickets and the number on my hall ticket, which my mother has still preserved, was 4512.

The fateful day of the examination came and we were led in an orderly group by our Head Mistress, Miss Philomena Coutinho from our school to the St. Philomena’s Church nearby for a special prayer for our success. The prayer was conducted by none other than Reverend Mathias Fernandes, the Bishop himself. And, since the most fervent of Christian prayers necessarily have to be on bended knees, we were made to kneel in the church. And, as I still remember, kneeling on the hard marble floor of the church all through the inordinately long prayer service was the most painful part of the seventh standard public examination for me!

Coming back to the present, my morning newspaper today says that parents of children all over the State who are studying in the seventh standard are anxious and upset that there is the likelihood of a public examination being imposed on their wards. Their fear is based on the possibility that if this does happen their children will be in the imminent danger of being detained if they do not perform well enough to secure passing marks. After all, that seems to be the only object of conducting a public examination bang in the middle of their schooling process in a system that hitherto had no real filter to separate the grain from the chaff till they arrived at the tenth standard chopping block.

Yes, unlike in the days of yore when under-performing children would fail and be detained in every class, today’s education system is unusually kind to them while perhaps being unkind to the quality of knowledge they gain from their education process. I say this because when I talk to schoolchildren when they come to see me as patients about what they are studying, which I invariably do, I find that a good many of them are grossly misinformed if not completely ignorant. In case you are inclined to think that this is only in the case of those studying in rural and the not-so-elite schools you are sadly mistaken.

I have had long chats with students from some of the best schools in our city and have been appalled at what they have picked up as knowledge. They are only able to rattle off long passages from memory without being able to discuss what they mean. They do not possess any reasoning skills and are unable to explain why natural phenomena like the seasons and the monsoon happen as they do.

I have found that the culprit here is the dictation of notes in their classes just to complete the portions without any explanation which goes by the name of teaching today. This dictation of notes is bad enough if it is done by their teachers but when it is entrusted to class monitors it becomes an utter sacrilege!

Many teachers after the examinations are over collect the notes written by the students with the best and most legible handwriting and entrust them into the custody of the current year’s monitors for dictation. The annual march of this storehouse of knowledge from hand to hand and book to book effects a transition that changes and completely alters it meaning.

Here is a gem which I picked up from the book of a ninth standard schoolboy recently. His notebook says: “The friendly bacteria in our intestine are very useful because they digest the food and prepare vitamin B complex tablets which help in giving us strong muscles.”

While the statement is largely true, the conversion of the vitamins into their commercially available ‘tablet’ form must certainly be the handiwork of a slightly more intelligent ‘dictator’! Now, such statements which start off as sense metamorphose into complete nonsense as they pass on from student to student. But because we never had a system of examination in place over the past three decades where an external agency would assess what was being taught in our schools and held both the teachers and the taught accountable, it was very convenient.

Students both good and bad would simply move up the ladder of what was called schooling without being assessed which they and their parents too enjoyed because it did not entail any loss of term. But now that the fear of being detained at the seventh standard level seems to be looming large they have naturally become a little jittery. But I am of the opinion that allowing students to just drift along in their schooling process without any checks that help them to understand where they stand and improve their performance just seems meaningless.

What is the point in letting them sail along only to get stuck at the tenth standard level with their capabilities irreparably hamstrung and handicapped? This is exactly what is happening now and bringing back the public examination at the seventh standard level is perhaps the correction measure which our education planners seem to have woken up to after their long slumber.