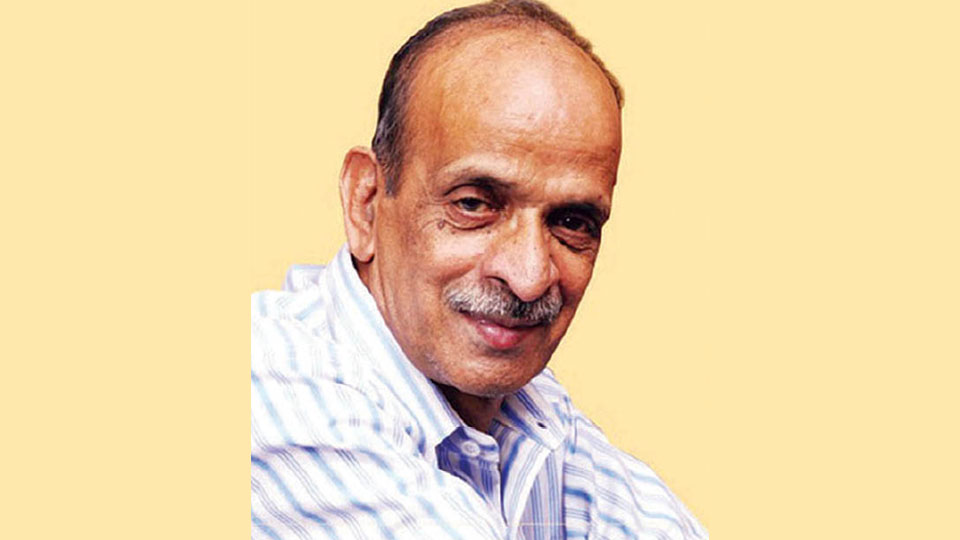 Mysore/Mysuru: City’s renowned publisher and writer T.S. Chayapathi (79) passed away at his residence ‘Ramya’ in Gokulam third stage here yesterday. He leaves behind his wife Pushpa, daughter Pratibha, son Pavan Srinivas and a host of relatives and friends. His last rites were performed today at Chirashatidhama in Gokulam, according to family sources.

Chayapathi, who was born to Ta.Su. Shamaraya and Subbalakshmi couple on May 10, 1944, did his M.Com degree and entered the Publishing field out of interest by taking responsibility of Talukina Venkannaiah Smaraka Granthamale set up by his father in 1950. He has more than a thousand published works to his credit. He has also written about 23 books, thus establishing himself also as a writer.

He has won many awards and prizes including ‘Zilleya Pratibhaanvita’ award given by Mysuru district Kannada Sahitya Parishat, ‘Sahitya Seva Dhureena’ award  given by Chitradurga’s Murugha Mutt, ‘Best Publisher’ award given by Kannada Book Authority and ’Parisara Shilpi Padmashri’, among others.

He was honoured at the 37th Kannada Rajyotsava programme organised by the then SBM Bank, by MP Sreenivasa Prasad  at ‘Chayabhinandana’ felicitation volume release programme, by Muktaka Sahitya Academy and during Bellippadi Satish Rai’s ‘Geethamrutha Vahini’ book release programme.

He was also honoured by renowned poet Nissar Ahmed at his (Chayapathi) 75th birthday programme, by former Union Minister M.V. Rajashekaran at V. Seetharamaiah Samsmarana Vedike programme and on many other occasions. This apart, he was conferred the ‘Best Publisher’ award by Kendra Sahitya Parishat. T.S. Chayapathi maintained a close association with Star of Mysore eveninger and its sister publication Mysuru Mithra. He also published the newspapers’  Founder-Editor K.B. Ganapathy’s book ‘Star of Mysore’ marking the 40th anniversary of the newspaper in 2018, when he was felicitated by the then Union Minister H.N. Ananth Kumar  (now late).

Many writers, poets, publishers and other leading personalities have condoled Chayapathi’s demise.