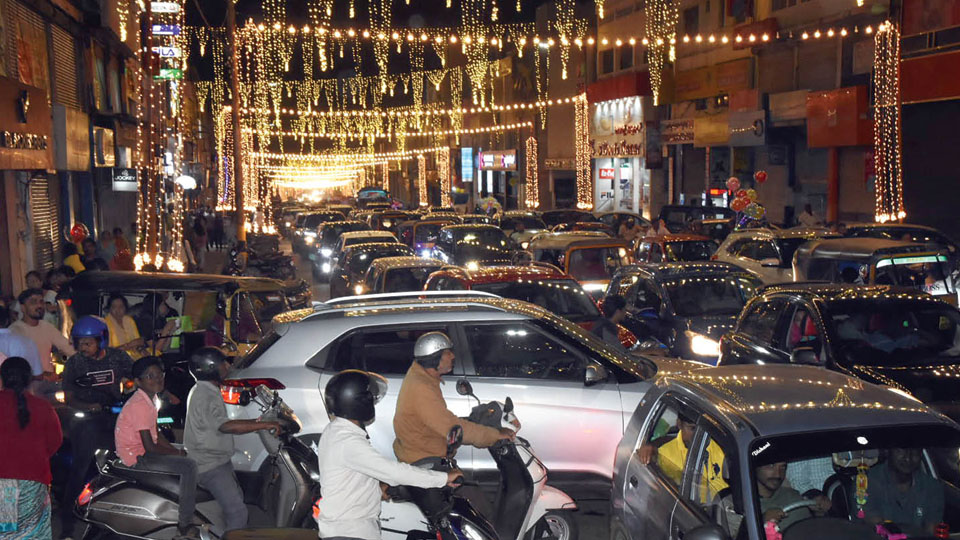 As countdown for Jumboo Savari begins Crowds jostle for space

Mysore/Mysuru: Thousands of tourists have descended on Mysuru for Dasara and with just two days remaining for Jumboo Savari, the crowd is expected to surge further. All the hotel rooms, dormitories, kalyana mantaps, resorts and homestays in and around Mysuru have been booked and despite this, hoteliers are getting continuous calls from anxious tourists for accommodation enquiries.

There are hundreds of people crowding the venues at any given point of time in the Central Business District and near the locations of popular Dasara programmes. By far, Food Festival at Bharat Scouts and Guides Grounds and at MUDA Grounds near Lalitha Mahal Palace Hotel and the Maharaja’s College are the most popular venues for the people to hog on delicacies and listen to rocking music.

Other popular venues are Mysore Palace and Kuppanna Park where flower shows are being held. Places including Mysuru Zoo, Karanji Lake Nature Park, Chamundi Hill, KRS Dam, Railway Museum and in and around Srirangapatna are teeming with people. The number is expected to rise further as the Bharat Jodo Yatra is expected to enter the city limits by this evening.

It is near-impossible to traverse on the roads from 6.30 pm to about 10.30 pm when almost all the roads are experiencing peak hour traffic, thanks to brightly lit-up roads and the desire of everyone to see the illumination, especially from open-roof vehicles.

Amidst traffic jams are the double-decker Ambaari buses that go on night trips taking people around. There is a huge demand for buses along with demand for tonga rides. Even autos are in great demand. Many people are dumping their four-wheelers and coming to the city on scooters and bikes, just to enjoy illumination. Crowds surge on the streets in the evening to proceed to Maharaja’s College Grounds where the Yuva Dasara is being held and thousands of vehicles are on the street to see the illumination resulting in bumper-to-bumper traffic.

According to Mysuru Hotel Owners’ Association President C. Narayanagowda, there is 100% occupancy in hotels, clubs, resorts, homestays and serviced apartments. People are even booking choultries and dormitories. Rooms of all categories including the expensive and cheaper ones have been booked and this scene will  prevail till Oct. 6, he added.

[With inputs from Asmatullah Daneshjo]