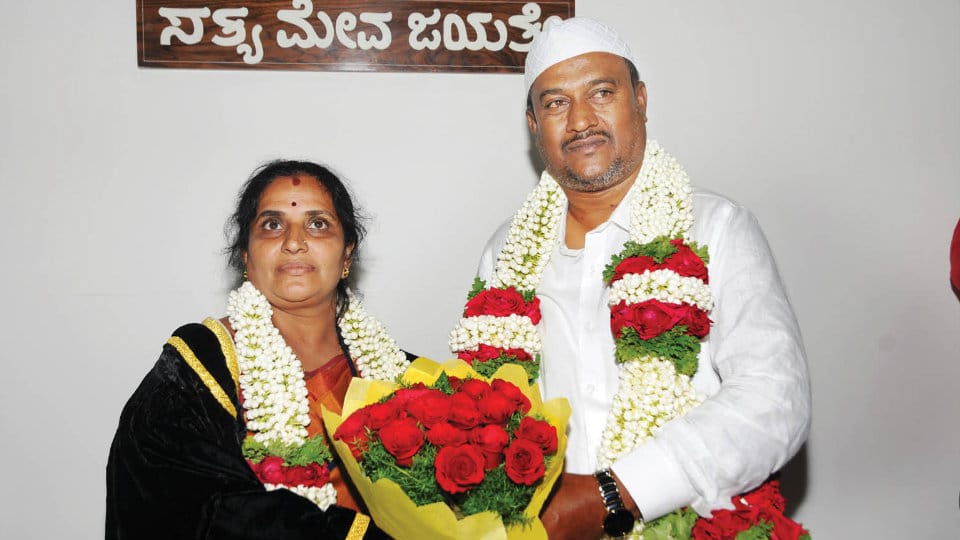 Mysuru: The coalition partners Congress and JD(S) successfully passed the litmus test of Mayoral Election this morning with Pushpalatha Jagannath of Congress being elected as Mayor and Shafi Ahmed of the JD(S) being elected as the Deputy Mayor.

Five seats were won by Independents and one seat was won by Bahujan Samaj Party. The coalition partners resolved to forge a post-poll alliance to keep the BJP out of power.

MP Pratap Simha was, however, absent for voting and he arrived at the polling hall after the election. BJP rebel candidate M.V. Ramprasad took a neutral stand in both Mayor and Deputy’s election. Even as Congress and JD(S) cobbled up a working majority, they gained the support of the lone BSP Member and five Independents. 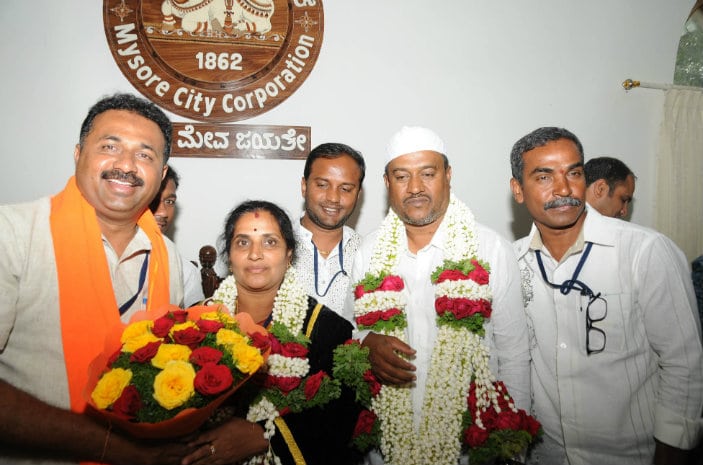 Yesterday, there was a stiff competition among the coalition partners for the Mayor’s post and it was a test for both parties as they had resolved to take on the BJP in Karnataka during the 2019 Lok Sabha elections. They could not have afforded to betray their differences openly.

The consensus, was however, reached in Bengaluru following the intervention of JD(S) Supremo H.D. Deve Gowda and CM Kumaraswamy. Former CM Siddharamaiah is said to have spoken to Deve Gowda and broke the deadlock.

The coalition partners also discussed the power-sharing formula that needs to be adopted for five years. Accordingly, the coalition partner that gets the Mayor’s post first (Congress) will enjoy the power for first two years. Likewise, the partner that gets the Mayor’s post on the third year (JD-S) will remain in power for the remaining three years.

For the Finance and Taxation Standing Committee, Corporators Rukmini Mahadev, Safir Ahmed, Shobha, S. Prema, M. Shivakumar, C. Vedavathi and Sharath Kumar were elected; Health and Sanitation Standing Committee: Eight nomination papers were filed and among them, the papers of Corporator Hajira were rejected as they were not in order. Finally, Corporators Sathwik, Ramesh, Taslim, Lokesh, C. Sridhar, Samiulla and Geetha Yoganand were elected to the Committee.

For the Town Planning Standing Committee too, there were eight nominations and the nomination of C. Sridhar was rejected as he was already elected as the member of Health and Sanitation Standing Committee. Finally, Lakshmi, R. Nagaraju, K.V. Sridhar, Syed Afrathullah, Ashwini Ananthu, R. Rangaswamy and Shanthamma were elected unopposed.

ONE COMMENT ON THIS POST To “Pushpalatha Jagannath of Congress is new Mayor, Shafi Ahmed of JD(S) Deputy”