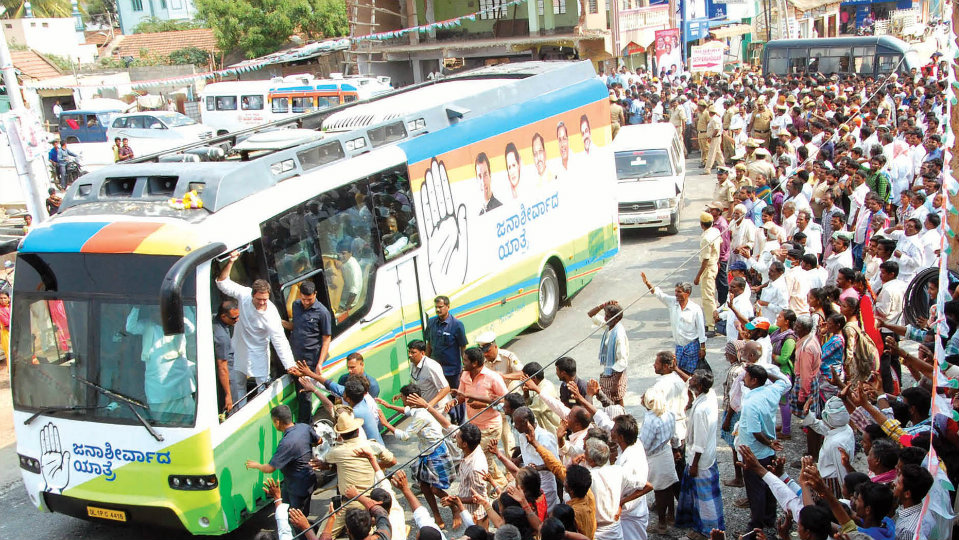 Chamarajanagar: Accusing the ruling BJP at the Centre of making efforts to change the Constitution, AICC President Rahul Gandhi asserted that the Congress will not let this happen, come what may.

Addressing the party’s ‘Janashirvada’ rally at Dr. B.R. Ambedkar Stadium here yesterday, Rahul alleged that the Modi Government which had refused to waive farm loans, had waived off Rs. 2.5 lakh crore of public money to benefit a handful of the rich.

Claiming that the previous BJP Government misused public money through corrupt practices, the AICC President said that the Congress Government had provided rice to the poor under Anna Bhagya, milk under Ksheera Bhagya and free cycles and books to students, among others.

The State Government will also provide free education to girls till they complete their Post-Graduation, he added. Chief Minister Siddharamaiah in his address, listed out his Government’s programmes during the last five years.

Highlighting the reasons why his Government should be re-elected in the upcoming Assembly polls, Siddharamaiah maintained that he ensured a stable and corruption free governance.

Claiming that his Government put the State firmly on the path of development, apart from coming out with much needed welfare programmes like Matru Poorna and Indira canteens to address the food and nutritional needs of the poor, Siddharamaiah said his Government’s waiver of farm loans to the tune of Rs. 8,500 crores benefited 22 lakh farmers in the State.

The CM also lashed out at Prime Minister Narendra Modi and State BJP Chief B.S. Yeddyurappa for making baseless charges against the State Government. He said that PM Modi who comes to Karnataka does not speak of development works, but disappears after making baseless allegations. 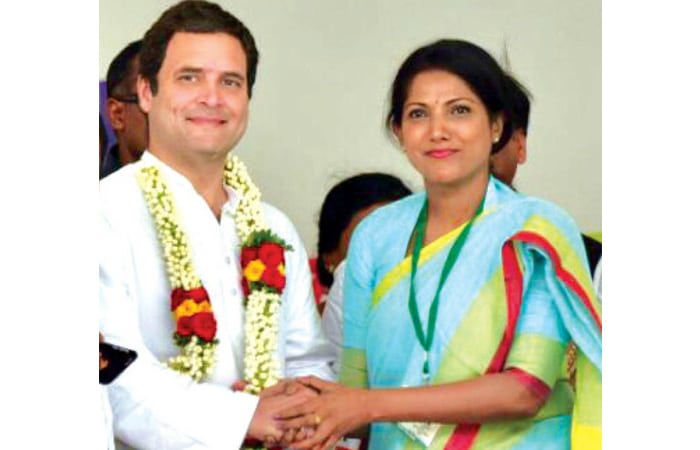 By visiting Chamarajanagar on nine occasions since he became the Chief Minister five years ago, Siddharamaiah said he had exorcised the ‘curse’ surrounding the visit to the town by a Chief Minister.

Maintaining that he has emerged, stronger over the years after visiting Chamarajanagar, a town which many considered as ‘Jinxed’, Siddharamaiah said “I have visited the town nine times and am completing the five-year term in office.”

Referring to former CM Yeddyurappa’s failure to visit the town even once, the CM said in future, all Chief Ministers should visit Chamarajanagar and ensure its all round development.

After the rally, Rahul took part in a road show passing through the main thoroughfares of Chamarajanagar town. Rahul Gandhi who boarded the party’s ‘Janashrivad Yatra’ Bus, began his road show from the Travellers Bungalow in the town and passed through Sultan Shariff Circle, KSRTC bus stand, Bhuvaneshwari Circle, Deviation Road and Santemarahalli Circle.

Thousands of people who stood along the streets of the town, greeted Rahul, who sat in the front row of the bus for most part of the road show.

However, at Santemarahalli, Rahul stood at the foot-board of the bus and waved his hands at the crowd, which was eager to have a glimpse at him.

As a large number of people moved at once to have a closer look at Rahul, the Police had to resort to mild lathi charge to control the surging crowd. After Siddharamaiah, the AICC President held similar road show at Yelandur on the way to Kollegal.

At Kollegal: Rahul after holding a road show in prominent thoroughfares of the town, inaugurated an Indira canteen and had his food there.