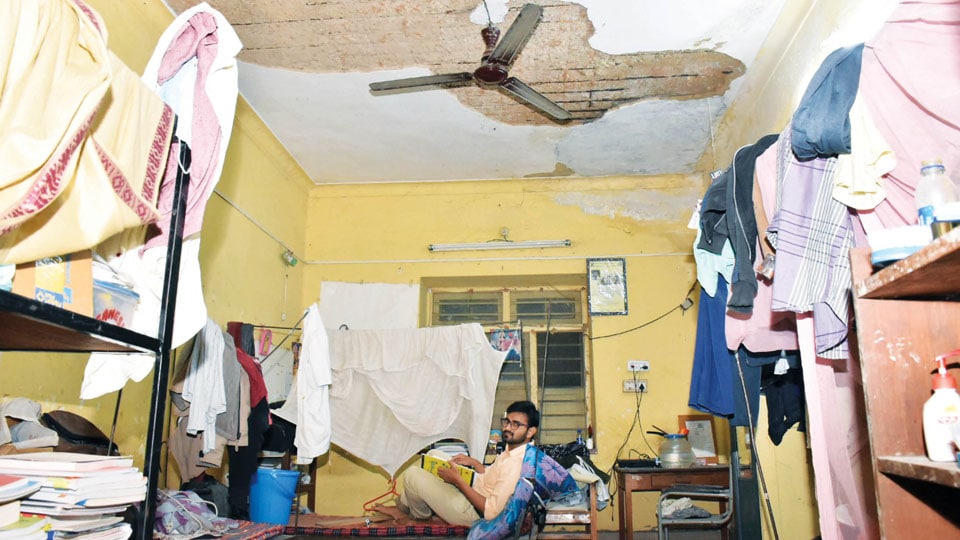 Mysore/Mysuru: The Under-Graduate (UG) students of Mysore Medical College and Research Institute (MMC&RI), who are staying at the hostel on JLB Road in city, are virtually living with the heart in their hands, thanks to falling of cement plaster of the ceiling. This is the boys hostel which was built in 1962.

This is not happening in single room but also a story of a majority of rooms due of ‘lack of maintenance.’ As many as 400 Medicos are staying in this hostel which has around 140 rooms out of which 20 were being used for other purposes.

Having housed thousands of students in the last 58 years, this building is now crying for attention. Two rooms have been declared ‘unfit’ for occupation.

Three days ago, a few students had a close shave when the cement plaster of the ceiling rained on them. They ran out for safety. Every year, an average of 70 students to 80 students get into this hostel but this year they had been given alternative accommodation.

After this incident, Dr. C.P. Nanjaraj, Dean and Director, MMC&RI, held a meeting. Hostel Warden K.T. Chandrashekar explained the poor state of the entire building. The Director instructed him to seek a report on the sturdiness of the building and also to know whether this building was fit for occupation or demolition. In case of demolition, students will be temporarily shifted to the building behind PKTB Hospital on KRS Road.

The photo of fallen ceiling plaster of MMC&RI UG Boys Hostel has been posted on Karnataka Association of Resident Doctors’ Page seeking the authorities concerned to do something before it harms somebody. One of the twitter handlers has recalled similar incidents that occurred  in 2009 and 2015.