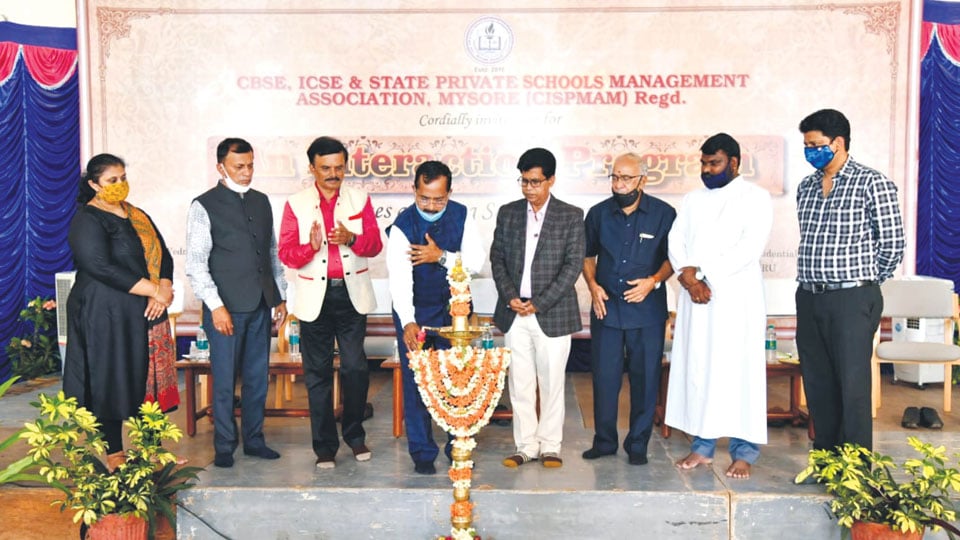 Mysore/Mysuru: Even as uncertainty continues over re-opening of schools, with the Government yet to decide on the exact date of re-opening in the wake of COVID-19 crisis, city-based CISPMA (CBSE, ICSE and State Board Private School Managements Association) in the five southern districts of Mysuru, Hassan, Mandya, Chamarajanagar and Kodagu, on Wednesday decided to reopen schools only in January only if the Government assures the managements that they will not be held responsible if students contract COVID-19. The  decision was taken at  the CISPMA meeting held at Jnanasarovar International Residential School here yesterday.

CISPMA President Sudhakar S. Shetty said that Primary and Secondary Education Minister S. Suresh Kumar addressed the meeting virtually from Bengaluru, during which he assured the association members of attending to the grievances of private schools. The Minister also appealed the school managements to join hands with the Government in the interests of the students at this critical juncture, he added.

The meeting discussed at length the challenges involved in the re-opening of schools.

Pointing out that the safety of students and staff is important at this critical times, Shetty said that the association has decided to reopen schools with regular classes only in January, provided the Government promises that  no action will be taken against the teachers or managements in case a student contracts the virus.

Highlighting the severe financial crisis that school managements have been facing following closure of schools, Shetty appealed the Government to waive of tax for this fiscal. Urging the Government  to remove educational Institutions from the Property Tax bracket, he also sought waiver of interest on loans taken by educational institutions till April 2021.

Meanwhile, MLA L. Nagendra urged the Government to take stringent action against unscrupulous persons who harass educational Institutions in the name of RTI activists. He further said that he will arrange a meeting between the District Minister and school managements to discuss property tax, reimbursement of RTE grants, allotment of CA sites and other issues concerning private schools.

MUDA Chairman H.V. Rajeev said that as he himself is running a school, he is very much aware of the financial problems faced by the educational institutions, in the wake of Corona crisis and added that he will take up the difficulties faced by school managements with the Government.