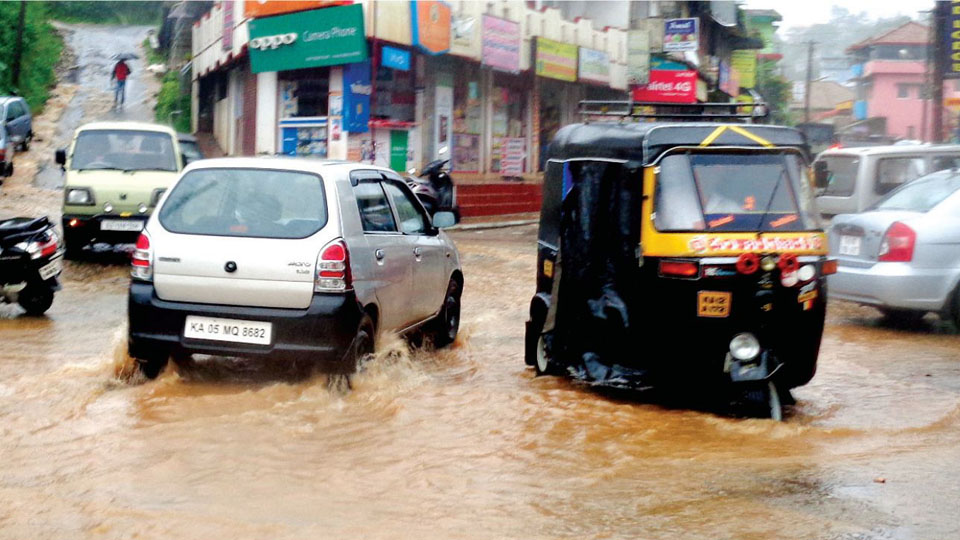 Madikeri:  After a brief break, monsoon has gained momentum in Kodagu yesterday. Heavy to very heavy rain has been reported from several parts of Kodagu, especially in Madikeri taluk. Following incessant rain, the Kodagu District Administration has declared a holiday for primary schools and high schools in Madikeri and Somwarpet taluks today.

So far, three persons have lost their lives in Kodagu since June 1 and widespread destruction including landslides, tree fall and snapping of electricity and telephone lines have kept the administration on their toes. Many areas do not have power and telephone connectivity has been disrupted.

The crucial Makutta Road that connects Karnataka and Kerala continues to be blocked as over 20 kilometres of the road has been damaged at many places. Small bridges have either been washed away or damaged and water has entered many houses. Some of the houses that have been constructed in slopes have collapsed.

Though National Disaster Relief Force (NDRF) is working round-the-clock along with the District Administration to clear the Makutta Road, it will take at least 10 days for the landslides to be cleared. Relief measures will surely get disrupted if it rains further, said Virajpet taluk authorities. In the last 24 hours (ending 8.30 am yesterday), the district received an average of 44.66 mm rainfall. Last year, the district had received a rainfall of 51.83 on the same day.

So far, since January, Kodagu received 1,243.23 mm rain while the rain data of last year stood at 628.5 mm during the same period.

Bhagamandala received 127.4 mm, yesterday which was the highest in the district. The other areas with significant rainfall include Sampaje (70.4 mm), Napoklu (65.2 mm), Madikeri (56 mm) and Shanthalli (43 mm).

Kodagu
Move to include Kodava as third language in State, CBSE syllabus
A practice that cures but leaves a scar