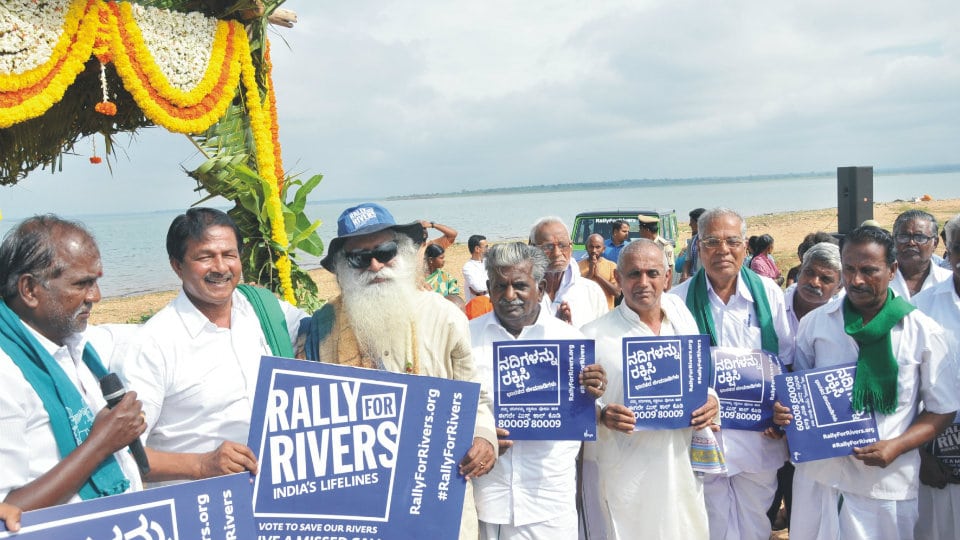 Mysuru:  Over 300 people including farmers from Karnataka and Tamil Nadu assembled at Meenakshipura, the village on the backwaters of Krishna Raja Sagar Dam, this morning to welcome the “Rally for Rivers” that reached Mysuru from Puducherry. Meenakshipura is over 22 kilometres from Mysuru.

The rally is led by Founder of Coimbatore-based Isha Foundation and spiritual leader Sadhguru Jaggi Vasudev where he is driving across from Kanyakumari to the Himalayas.

The rally was kicked off on Sept. 3 in Coimbatore and will conclude on Oct. 2 in New Delhi after covering 16 States and 7,000 kilometres.

After offering the pujas, Jaggi Vasudev told the farmers that Isha Foundation had consulted various water experts and legal luminaries and had prepared a National Water Policy. “We have come up with the draft National River Policy and will present the same to Prime Minister Narendra Modi after the rally reaches New Delhi,” he said.

Interacting with farmers, Sadhguru said that whenever Cauvery issue is raised, people speak about the quantum of water to be shared by Karnataka and Tamil Nadu. “Unfortunately, no one speaks on the availability of water and the need to conserve water.”

In a passionate plea to save water, Jaggi Vasudev spoke about “Kaveri Kudumbam” (Cauvery Family) where the farmers of Karnataka and Tamil Nadu would meet frequently to discuss the water availability and sharing. This “Kaveri Kudumbam” is defunct now and there is an urgent need to revive the same, Sadhguru said.

Speaking on behalf of Karnataka farmers, Melukote MLA K.S. Puttannaiah showered praises on Jaggi Vasudev for launching such a meaningful rally. Each person spends about 135 litres of water daily and 45,000 litres every year. “Reports say that by 2030, 20 percent of the world’s population will die due to lack of water. It is high time we save our natural resources and join hands with ‘Rally for Rivers’,” he said.

After Mysuru, the rally will move towards Bengaluru tomorrow where a large-scale public event will take place at Palace Grounds.

The rally will reach New Delhi on Oct. 2, covering 16 States and 23 events in major cities, traversing a stretch of 7,000 kilometres.