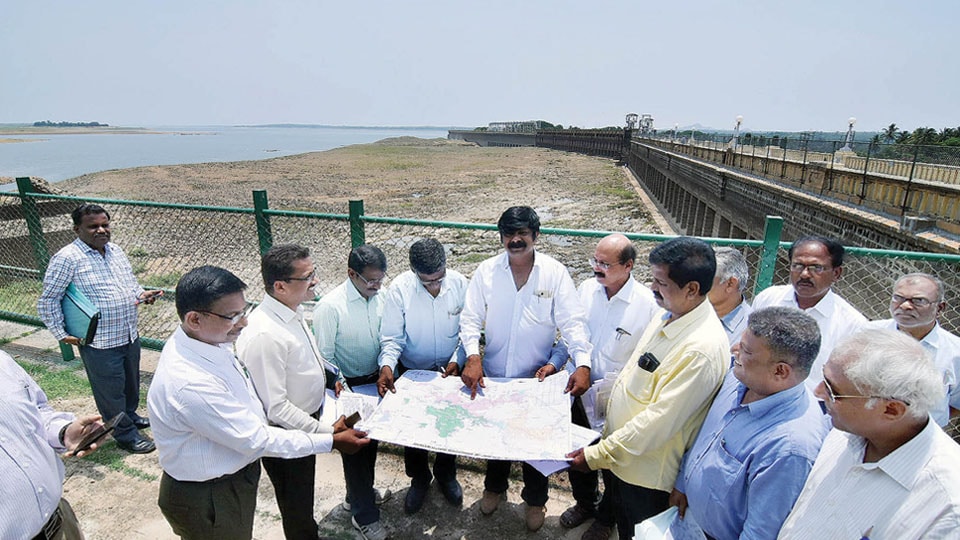 Three-week inspection to study online monitoring system of Reservoirs through telemetry; Nothing to do with water-sharing issue

Mysore: A team of experts from an Internal Committee of Cauvery Water Management Authority (CWMA) began a three-week long inspection of Cauvery Basin Reservoirs by visiting the KRS Dam in Srirangapatna Taluk of Mandya District this morning.

The Union Government has constituted the Authority (CWMA) as directed by the Supreme Court and an Internal Committee comprising Irrigation experts from the Cauvery Basin States of Karnataka, Tamil Nadu, Kerala and Puducherry has been formed.

The Committee will inspect the KRS Dam tomorrow also and this is the first study tour undertaken by the Panel after it was formed.

The members of the Committee from outside Karnataka arrived in the city late last night and stayed at Royal Orchid Brindavan Garden Palace & Spa in KRS.

The two-day study tour began with a technical session at the Conference Hall of the Brindavan Hotel this morning.

The meeting discussed online monitoring system for the Reservoirs under Cauvery Basin through telemetry-based real-time data acquisition and transmission; Installation of water level censors; Flow rate sensors at all canals / outlets taking off from all the eight Reservoirs coming under Cauvery Basin and technical issues such as capacity enhancement of dams, safety of dams, prevention of leakages, modernisation of canals for prevention of seepage etc.

A power-point presentation on all technical aspects concerning optimum storage, distribution of water through canals and such other issues was made at the session, it is learnt.

READ ALSO  CM to offer Bagina to KRS and Kabini Dams on Aug. 21

The team is scheduled to visit Mettur (Stanley Reservoir), Lower Bhavani and Amaravathi Reservoirs in Tamil Nadu from June 7 to 9, Seven contact points already in operation between Tamil Nadu and Puducherry on June 9 and 10, Hemavathi, Harangi and Kabini Reservoirs in Karnataka from June 17 to 20 and Banasurasagar Reservoir in Kerala on June 24 and 25, following which it will submit a report to the CWMA / CWRC.

However, the Committee will not go into any aspects concerning water- sharing issue between the four Riparian States.

Prior to the technical session this morning, the bust of Nalwadi Krishnaraja Wadiyar close to the Brindavan Hotel was garlanded to mark the 135th birth anniversary of the erstwhile Mysuru ruler.

Speaking on the occasion, CNNL SE H.C. Ramendra said that Nalwadi was the architect of KRS Dam and it was most appropriate to honour him on this occasion. He also recalled the enormous contributions made by the erstwhile Mysuru ruler for the welfare of the State.