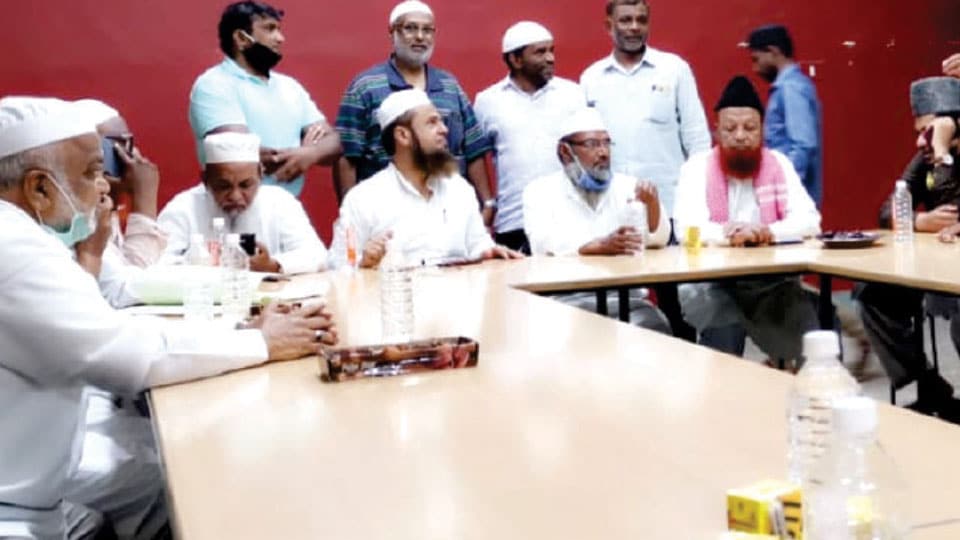 At the Mysuru District Moon Committee meeting held yesterday at Apna Ghar in Shivarathreeshwara Nagar which was chaired by Sir Khazi of Mysuru Hazrath Moulana Mohammed Usman Shariff, the Committee that had collected information from various places decided to celebrate the festival on Monday as the moon was not sighted on Saturday. Fasting would continue for the last day today.

Meanwhile, All India Milli Council Mysuru Branch President Hazrath Moulana Mohammed Zakaulla, speaking to ‘Star of Mysore’ this morning, said that Ramzan would be celebrated tomorrow and added that there would be no mass prayers at Eidgah Maidan and Mosques.

Mayor Tasneem had requested Chief Minister B.S. Yediyurappa to grant permission for Muslim brethren to offer mass prayers at Eidgah Maidan by maintaining social distance. But there is no communication from the CM’s Office in this regard.

Speaking to ‘SOM,’ Mayor Tasneem said that a request has been made to the State Government to allow limited persons to offer prayers at Eidgah Grounds and in Mosques who would be wearing face masks and maintain social distance. “We are waiting for the Government’s decision,” she said and added that every rule by the Government in this regard would be followed.

With complete lockdown in force from 7 pm yesterday till 7 am tomorrow, Muslim community members completed their festival shopping before 7 pm yesterday.

Meena Bazaar, the festival shopping hub being closed due to COVID-19 pandemic, they had to depend on other places across the city for new garments, jewellery, footwear and other items.

Khaleel, a resident of Mandi Mohalla, said that the outbreak of COVID has caused a lot of problems to everyone and added that he and his family would pray for the good health of all. He further said that children above the age of seven, women and men have been fasting in this holy month and added that in this present situation, health of everyone is important than the grand celebrations.

Needy people were identified in Ward 25 and Ward 26 and Ramzan kits were distributed to them.