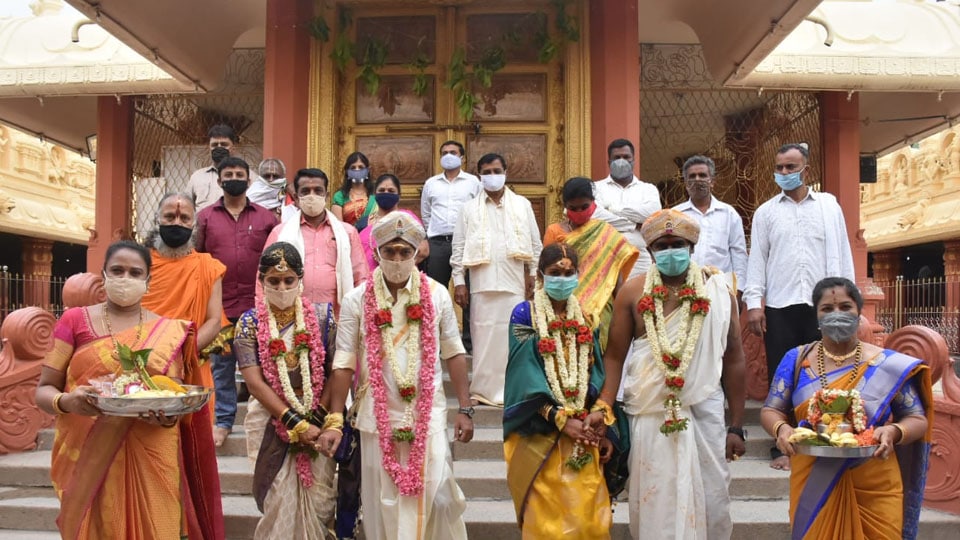 Several couples get married in Mysuru on Lockdown Sunday

Mysore/Mysuru: Several couples got married in Mysuru today, while the Karnataka Government announced a complete lockdown on Sundays, as part of the fourth phase of COVID-19 shutdown till the end of this month.

The marriage ceremonies were possible thanks to a clarification given by the State Government for marriages, which has been already scheduled for May 24 and May 31 to be exempted from the Sunday complete lockdown.

While two couples got married in Sri Yoganarasimhaswamy Temple at Vijayanagar First Stage, one couple tied the knot inside Sri Lakshmivenkataramanaswamy Temple in Vontikoppal. Another pre-decided wedding was performed at Chikkamma Niketana Kalyana Mantapa in Kuvempunagar.

According to the belief in the region, weddings during this time ahead of the Ashaada Month is considered auspicious. At today’s wedding, the rituals were performed with compliance of all guidelines including ensuring social distancing and capping the number of guests at 50. However, masks were not worn by anyone inside the Chikkamma Niketana Kalyana Mantapa where Vallish from Chamarajanagar and Sreevidya from Bengaluru got married.

Nagendra, a relative of Vallish said that they had booked the Choultry four months back. “The Government has allowed weddings with up to 50 people in attendance but we decided to invite only 45 people to the ceremony,” he said.

Despite the Government making clear that pre-scheduled weddings would be allowed on Sundays till May 31, fearing action, the two couples who got married at Sri Yoganarasimhaswamy Temple in Vijayanagar arrived at the Temple as early as 4 am and concluded the rituals by 8.30 am. “We did not want the Police to play a spoilsport and we finished early. Guests were served snacks and all vacated the premises by 9.30 am,” said a relative.

At Sri Lakshmivenkataramanaswamy Temple, Ramachari from Bengaluru and Aishwarya from Kumbarakoppal in Mysuru tied the knot with a handful of guests blessing them. They sported face masks throughout the ceremony.  As it is an auspicious period, many couples got married at their homes, making it a simple affair.