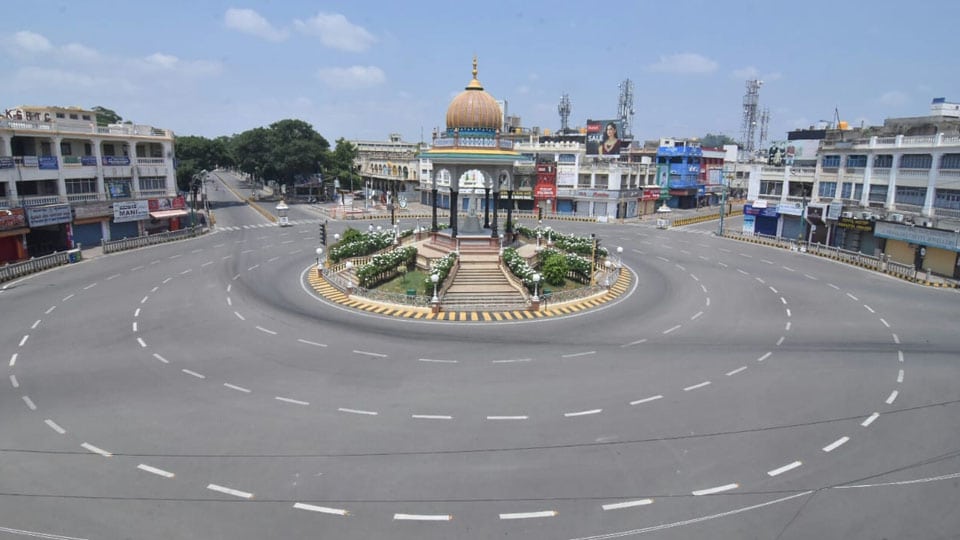 Mysore/Mysuru: Call it ‘Sunday Curfew’ or ‘Sunday Lockdown’ or a ‘36-hour shutdown’, the city’s streets wore a deserted look, resembling a ghost town with an eerie silence and uneasy calm prevailing across its length and breadth while hundreds of Policemen kept a close vigil.

“A total lockdown is in force across the State since Saturday evening 7 pm to Monday morning 7 am. A ban under Section 144 of the CrPC has also been imposed to prevent movement of people and vehicles,” a Police official said.

As decided by the State Government to contain the Coronavirus spread, the Sunday lockdown comes after a partial relaxation of restrictions on weekdays since May 19 to revive economic activity and restore near normalcy. The 36-hour lockdown received overwhelming response with people remaining inside their houses and not venturing to go outside unlike during previous similar situations.

Only essential services, including provision stores were allowed to function. Medical shops, sale of milk, vegetables, sweet meat stores and meat stalls were exempted from the bandh. Movement of vehicles including autorickshaw, bus service including private bus and KSRTC were banned. Except for a lone Shramik Special Train, no other transport service was available in city.

Streets, bus stands wore a deserted look and people cooperated with the Government to maximum extent. Even markets were shut as most of the people had finished festival shopping yesterday.

Only ambulances and vehicles on essential duty were allowed to ply during the curfew period. Many people preferred to walk to buy essentials and meat instead of taking their vehicles out. As there was an indication yesterday that there will be no people around, even many essential items and grocery shops remained closed.

All main roads, flyovers and enter/exit points on the city outskirts have been barricaded to prevent vehicular movement. No untoward incident reported from any part of the State so far, according to Police. In effect, the curfew was similar to the first two phases of the lockdown when only essential services were allowed. The Police have put up barricades on most of the roads to deter people from venturing out.