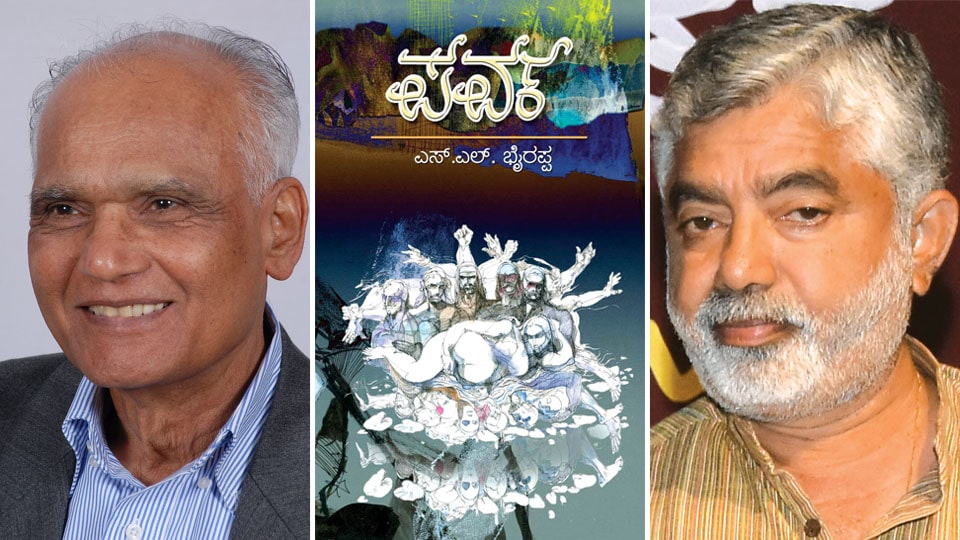 Rangayana to adapt Dr. S.L. Bhyrappa’s ‘Parva’ as a play; details worked out

Mysore/Mysuru: Saraswathi Samman recipient and acclaimed Kannada novelist Dr. S.L. Bhyrappa will soon catch the imagination of theatre lovers as his novels will be adapted into plays at theatre repertoire Rangayana.

Though the novelist’s works have been translated into English and many regional languages, Rangayana had not so far experimented on them as there was a prejudice that Bhyrappa is a right-wing writer. Though art and literature transcends the boundaries of caste, creed, sex, personal prejudices and religion and one cannot brand a writer as right wing, left wing or neutral, Dr. Bhyrappa was an anathema to many theatre activists, artistes and people who were in the forefront of theatre in Mysuru.

Dr. Bhyrappa hails from Mysuru and despite this, Mysuru’s Rangayana never thought of adapting his novels as plays to reach the mass audience. Now with Addanda C. Cariappa as the Rangayana Director, things are moving in the right direction without any bias, vested interests or prejudice. Bhyrappa’s novel ‘Parva’ will be adapted into a play and work has begun in this regard.

Rangayana has the distinction of bringing Kuvempu’s ‘Sri Ramayana Darshanam’ and ‘Malegalalli Madumagalu’ into theatre and both the plays received tremendous response. Rangayana artistes said that this ‘Parva’ adaptation is an ambitious project and the nitty-gritty of the project has begun with the artistes examining the finer details in the novel.

After the first show at Rangayana, ‘Parva’ will be staged across the State including places like Shivamogga, Dharwad, Kalaburagi, Chikkamagalur, Hubballi, Udupi, Chitradurga, Davanagere and other places.

Considering Dr. Bhyrappa’s popularity and a wide reach – thanks to the universal appeal of his novels – artistes are sure that the ‘Parva’ play will be well-received.

Actor Prakash Belawadi, a multi-faceted personality who has created a niche in theatre, will direct the play. If COVID pandemic eases, the play will be ready to be staged during Navaratri. “It is an ambitious project and as promised to the audience during last Bahuroopi, we will adapt Bhyrappa’s novel into a play. We will meet Bhyrappa and Prakash Belawadi soon and discuss the plans, chapters to be adapted, theme, overarching message and finer details,” Rangayana Director Cariappa told Star of Mysore.

Dr. Bhyrappa’s ‘Parva’ was written in 1979 and has entered 41st year. It has seen many reprints and is among the popular works of the acclaimed novelist. Recently, Kannada and Culture Minister C.T. Ravi had discussed about adapting ‘Parva’ into a play at a meeting of Ranga Samajas.

“By the mid-1970s, the novelist’s genius for detail — the smell of sandalwood soap on a lover’s body, the toothache that distracts the hero, the tiger’s skin against which the scholar rests to study the Vedas — and his ability to create memorable voices, especially for his women, were strengthened by a new interest in formal experimentation. In 1979, after having won the Sahitya Akademi award for ‘Daatu’, his novel about caste,  Bhyrappa published the work that defines him for many readers: Parva.”

“On the surface, it is an anthropological retelling of the Mahabharata, in which the Kurukshetra war is freed from mythology and magic and presented as an actual historical event, the novel is really a study of human character under extreme stress. Innovative in structure, ‘Parva’ is built around long interior monologues that are like arias; one by one, Bhyrappa enters into the minds of the major players, Pandava and Kaurava alike, to create complex, almost Cubist, character portraits,” Adiga says.

“First we see Karna being stupid and lustful, goading the Kauravas on to rape Draupadi; then, we see him about to bathe in the Ganga, thoughtful and insecure, having just discovered that he is the illegitimate son of Kunti; now we see him in battle, a cold-blooded killer; and finally, as a man torn between his loyalties, who lets himself be killed rather than betray either side. Melancholic in tone — the world of the Mahabharata is coming to an end in every page — ‘Parva’ reads like a Hindu Gotterdammerung. Though Bhyrappa’s characteristic failings are present here — repetitiousness and occasional verbosity — it is one of the most breathtaking of 20th-century Indian novels,” Adiga adds.