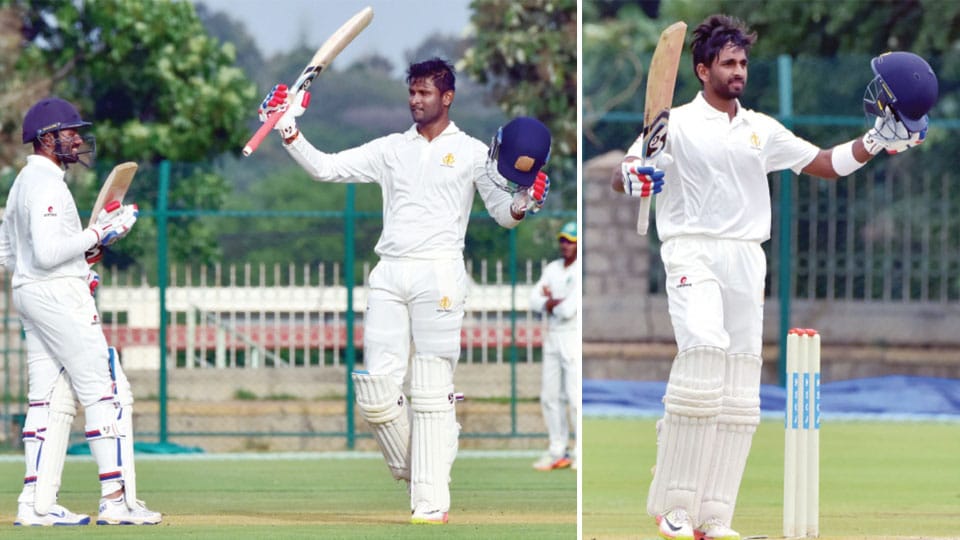 An unbeaten maiden century by all-rounder K. Gowtham (147 n.o, 10×4, 7×6) and a century by opener R. Samarth (123, 10×4) helped hosts Karnataka to finish day two on a commanding note with a score of 427 for six in 115 overs against Assam in their Ranji Trophy tie played at the SDNR Wadiyar Stadium here yesterday.

Resuming at their overnight score of 77 for no loss in 30 overs, Karnataka added 15 runs to their score before opener Mayank Agarwal (31, 3×4) departed bowled by medium-pacer Arup Das. One-drop batsman Abhishek Reddy was dismissed soon caught behind off medium-pacer Arup Das (92 for two).

Opener R. Samarth and Kaunain Abbas (30, 5x4s) batted responsibly and added 98-runs for the third wicket before the later fell to off-spinner P. Sarupam. Then K. Gowtham, who batted freely from the start, impressed with his strokes on both sides of the wicket and took heavy toll of the Assam bowlers.

Opener Samarth scored a well compiled century (123, 10x4s) before he fell to off-spinner P. Sarupam (190 for three). Wicket-keeper C.M. Gautham departed early falling leg-before to off-spinner P. Sarupam. Gowtham, meanwhile attacked the Assam bowlers at will and along with Stuart Binny (41, 2×4, 1×6) added 103-valuable runs for the sixth wicket. Gowtham completed his maiden century in Ranji Trophy and continued to play well and along with Shreyas Gopal (38 n.o, 3×4) has added 109-unfinished runs for the seventh wicket so far.

Karnataka are ahead by 282-runs at close on the second day and will aim to bat until the lunch interval on the third-day in order to have a sufficient total to bowl out Assam in their second innings. Medium-pacer Arup Das (three for 101) and off-spinner P. Sarupam (three for 80), were the wicket-takers for Assam.