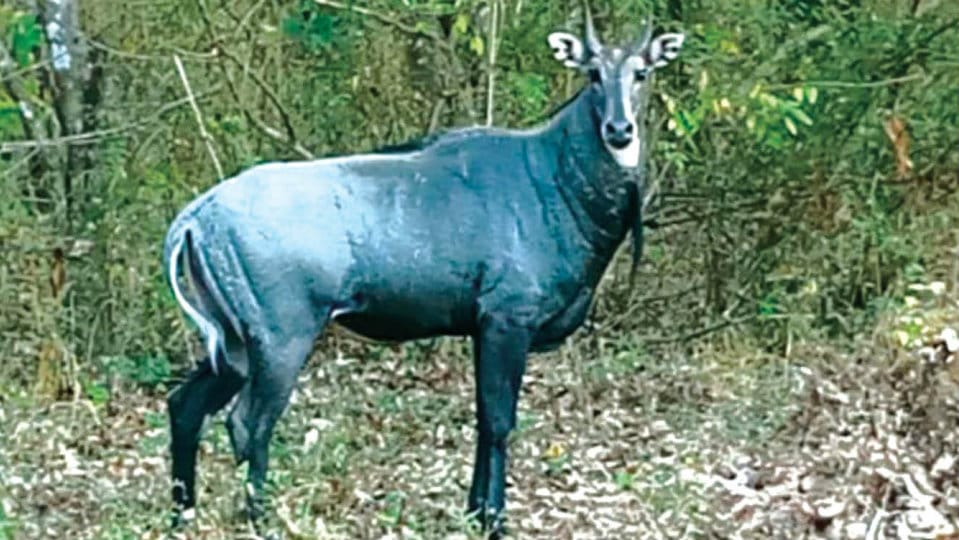 Rare Neelgai that was spotted at Bhadra Tiger Reserve dies

Chikkamagaluru:  The mysterious Neelgai (Blue Bull) that was discovered in the Muthodi Range of Bhadra Tiger Reserve in March this year is dead. According to forest officials, it was killed by a tiger and its body partially eaten.

How the Neelgai came to Karnataka that too in the wild, remains a mystery till date, as they are found only in the northern parts of the country. The Neelgai was found dead by the anti-poaching camp staff near Hippla of Muthodi Range on Monday evening. The carcass had tiger marks which revealed that it had been killed by a tiger, maybe on Friday.

Muthodi Assistant Conservator of Forests Chengappa said the beat staff discovered the body of Neelgai, which was in fact, a healthy animal and lived in the forest for almost nine months since its discovery in March. It was under observation but it was never found where it came from. Neelgai is found only in the North and maybe, very long back it was said to be in Kadur.”

G. Veeresh, wildlife activist added, “In the North, especially in Rajasthan, Neelgai is commonly found. But we don’t know how it came into Muthodi forest. It could have been shifted to the zoological park as it is not found in the South at all.”

The ‘blue bull’ was sighted at Bhadra in March after a long gap of 65 years. According to Forest Department officials, it was a big surprise to see the animal in a habitat that is semi-evergreen to moist deciduous.

The last time that a Neelgai was found in the State was way back in 1952 in Kundkere Range (bordering Sathyamangala forests) of Bandipur Tiger Reserve. The animal, however, was never found in Karnataka again.