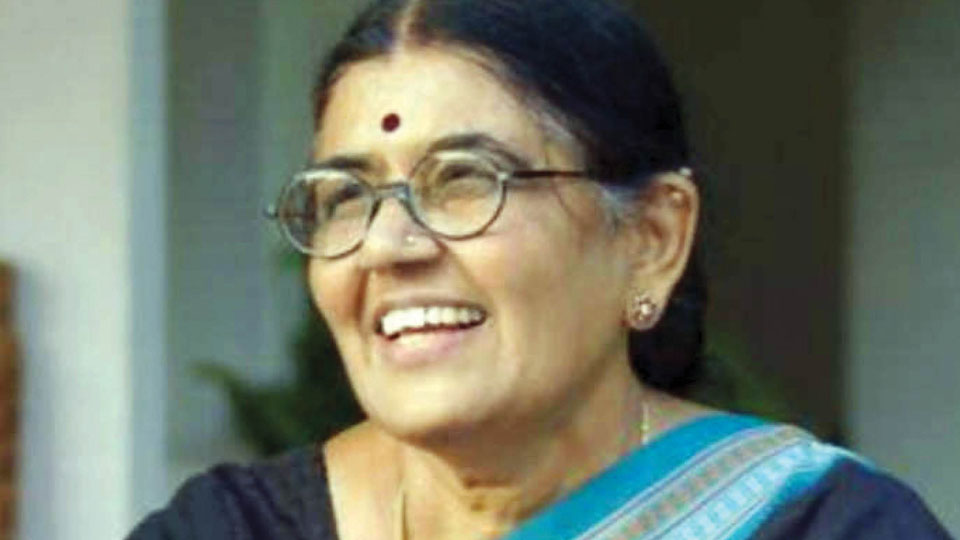 Chikkamagaluru: Rajeshwari Tejaswi (84), wife of renowned Kannada poet late K.P. Poornachandra Tejaswi and the daughter-in-law of Rashtrakavi Kuvempu, passed away at a private hospital in Bengaluru this morning.

She leaves behind two daughters, Sushmitha and Eshanya, both software engineers.

Rajeshwari Tejaswi had been undergoing treatment in the hospital for the past three to four days for high fever. After the death of her husband Poornachandra Tejaswi, Rajeshwari lived alone in their farm house near Hand Post in Moodigere here. She had been to Bengaluru to visit her daughter a few days ago, sources said.

As per her wishes, the family has decided to donate her body to a hospital. Arrangements have been made at her daughter Sushmitha’s house in HSR Layout in Bengaluru till 5.30 pm today for the public to pay their last respects, sources said.

Rajeshwari, born in a middle class family at Kalasipalya Layout in Bengaluru in 1937, was well-educated with all support from her father. When she came to Manasagangothri in Mysuru to pursue BA (Honors) and MA in Philosophy, she happened to meet Kuvempu’s son Poornachandra Tejaswi and both fell in love and decided to get married in 1966 when Kuvempu sermonised the ‘Mantra Mangalya.’ [To promote the concept of simple weddings, Kuvempu had composed secular vows or the commandments for the marriage ceremony and called them ‘Mantra Mangalya].

Rajeshwari has penned several books including ‘Nanna Tejaswi’ and ‘Namma Manegu Bandaru Gandhiji’. ‘Nanna Tejaswi,’ which is a first book written by Rajeshwari, has seen five prints so far.