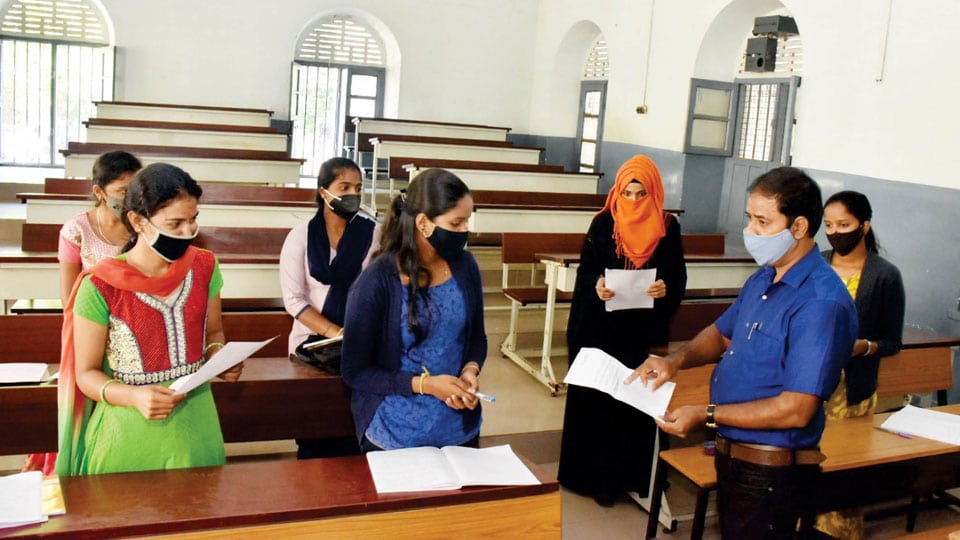 Mysore/Mysuru: Non-opening of hostels has been one of the reasons for poor attendance of students to Colleges which were opened on Nov. 17 after a gap of eight months.

More than 70 per cent of students of Mysuru Colleges belonged to rural areas. While a small portion of students travel daily, others stay in hostels. The State Government ordered re-opening of Colleges for final year students of under graduate and post graduate courses since Monday last, due to decline on COVID-19 cases. The students have been given the option of attending the classes offline or online. There was no compulsion on them to attend offline classes and attendance was not made mandatory for them. But, those who wished to attend classes offline must undergo a free RT-PCR test and show negative report to the College authorities. Many of them are ready to attend offline classes but not ready to come from their native till the hostels are re-opened.

The Colleges may have re-opened but the hostels run by Department of Social Welfare, Backward Classes were still shut. A majority of parents were not in a position to house their kids in private hostels due to bad economic condition. Even public transport facility was yet to improve in rural areas.

Students Organisations opine that daily travelling for 50 km distance will be difficult for students. There is no provision to stay back in city. Food is also a big problem for them as eating at food joints is not safe during the current COVID-19 pandemic.

Many wanted to attend offline classes but were forced to sit back home. It was not right on the part of the Varsity authorities to put the lives of students in peril without taking safety measures. Need of the hour was to re-open hostels and provide food and accommodation to needy students.