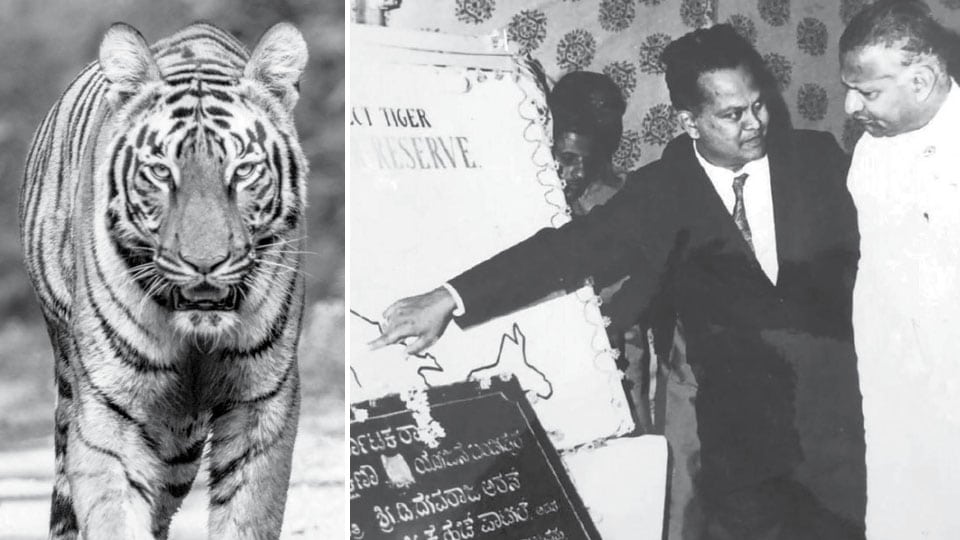 Gundlupet: It is definitely an occasion to celebrate. The ambitious ‘Project Tiger’ launched in 1973 to protect the dwindling tiger population in Karnataka forests, has completed 47 years.

On November 17, 1973, the then Chief Minister D. Devaraja Urs declared Bandipur Park as ‘Tiger Reserve’ heralding a new era of tiger protection in the country. Bandipur was announced as Park by including Venugopalaswamy Wildlife area and surrounding forest on February 19, 1941.  Only 13 tigers were there at the time of launching Project Tiger. Now, thanks to sustained efforts of forest officials, this Park has 175 tigers and second Park in the country to have the highest number of big cats.

In 1985, some more areas were brought under Tiger Reserve and re-christened as Bandipur National Park. At that time, the total area of Park was 874.20 sq km and more forest area was added in the coming years. Now the total area of Tiger Reserve was 912.04 sq kms which included Waynad in Kerala, Madhumalai in Tamil Nadu and BRT Sanctuary.

Year after year, the number of big cats is increasing due to strict vigilance. Of late, tigers are sighted on villages bordering Bandipur Tiger Reserve. According to an estimate, this Reserve has around 1,500 elephants. Bandipur forest is situated on Southern part of Western Ghats and three rivers, Kabini, Naguru and Mayar flows here. The Rolling Rock has improved the beauty of Bandipur.

Of late, aged tigers are moving towards human habitation in search of food and attack livestock and pets. The big cats are often involved in territorial fight. In the last three years, as many as 12 incidents of tiger attack on livestock have been reported in the area.

What is Project Tiger

It is a scheme launched in 1973 to protect the dwindling tiger population in India. Accordingly, 25 Tiger Reserve areas were created across the country. Under this scheme, human activities are completely banned in this reserve. Bandipur, which has maximum number of tigers and Nagarahole Forests are called as ‘Tiger Corridor.’  According to census, there were 290 tigers in 2006, 300 in 2010, 406 in 2014. Out of 406, 93 were found in Nagarahole and 110 in Bandipur. Tiger census is held once in four years. However, now it is held every year since 2018 following installation of camera trapping inside forests. The forests of Bandipur and Nagarahole are ideal for the growth of tiger population. Besides, prey availability has contributed a lot for the number to increase year by year, said an officer.