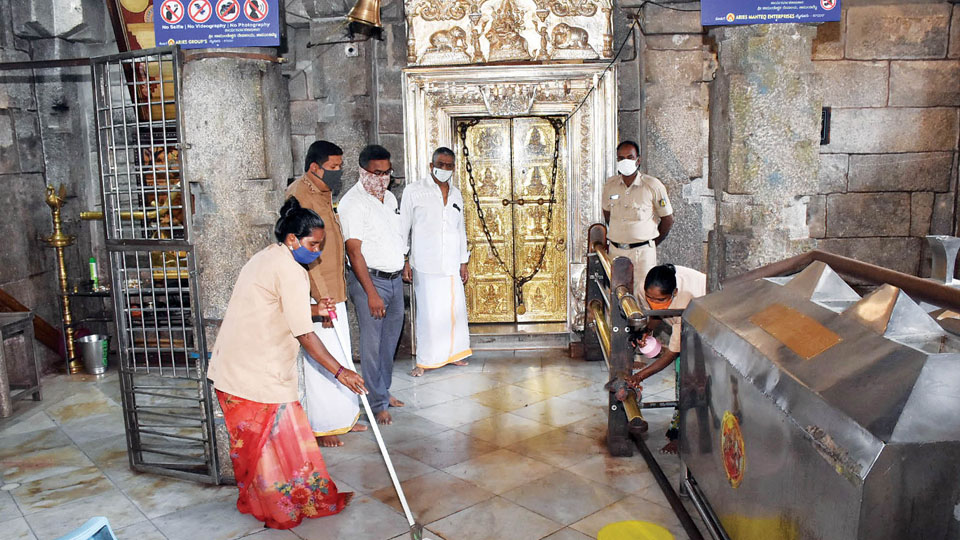 Mysore/Mysuru: In a step towards further unlocking the State that has shown a decline in positivity rate, Karnataka Government last evening announced a slew of relaxations to COVID restrictions which will come into effect from 6 am tomorrow (July 5) till 9 pm across the State except Kodagu. These new rules will stay till July 19.

Violating shops, business establishments, hotels and mall managements will be booked and repeat violators will be asked to shut shop for 15 to 20 days, said an official from Mysuru City Corporation who did not want to be named.

The relaxation comes after a terrifying second wave of the pandemic that brought most districts including Mysuru to a near standstill. From tomorrow, some level of normality will be restored with hotels, malls, shops, temples, religious places and offices reopening and daily life is expected to be back on track.

While schools, colleges, theatres and cinema halls will be closed, bars and restaurants will be allowed to open till 9 pm. According to the new guidelines, all restaurants, malls and private offices can also open with full capacity. However, pubs will be allowed to provide only take away service. All public transport is allowed to operate up to its seating capacity. However, all educational institutions, tutorials and colleges would remain closed until further orders.

Public transport will be allowed to operate in full seating capacity, instead of the previous 50 percent rule. Night curfew would continue from 9 pm to 5 am till July 19.

Swimming pools would be permitted for competitive training purposes only. Sports complexes and stadia would also be opened only for practice purposes. All social, political, sports, entertainment, academic, cultural, religious functions and other gatherings and large congregations would continue to be prohibited.

Marriages and family functions involving not more than 100 people would be permitted and funerals would be allowed with a maximum of 20 people. Police, Corporations, Municipalities and Panchayats have been told to strictly enforce wearing of face masks, hand hygiene, and maintaining social distance.

Non-wearing of masks attracted a fine of Rs. 250 in urban areas and Rs. 100 in rural areas. During the night curfew, patients and their attendants/ persons requiring emergency need for movement would be allowed to move.

All industries and companies which require operations at night would be permitted to operate and movement of employees of organisations would be allowed on producing valid ID card authorisation.

Movement of goods vehicles, buses, trains, and air travel have been permitted. Movement of public transport, private vehicles and taxis to and from airports, bus terminals, bus stands, railway stations, would be allowed on displaying valid travel documents during the curfew hours.

Hectic preparations including cleaning, sanitising and arrangements as per social distancing norms are underway at temples, malls, hotels and Mysuru Zoo from this morning. All of them are opening after a gap of two months.

“We are opening with a lot of expectations and we have suffered a loss of Rs. 20 crore per day when the entire hotel and hospitality industry is taken into consideration. We are ready to serve customers and are ensuring all COVID guidelines are adhered to,” Mysuru Hotel Owners Association President C. Narayanagowda told SOM.

Sri Chamundeshwari Temple Executive Officer S.N. Yathiraj Sampathkumaran said that all measures are in place to welcome visitors. “As per the Government directions, there will be no sevas and special pujas, but all mandatory and traditional pujas performed to the Goddess will be there as a daily routine inside the sanctum sanctorum. Crowd-control measures have been put in place and the entire temple complex and railings have been sanitised,” he added.

Malls have started cleaning as from tomorrow, all sections will be opened. Malls including B.M. Habitat Mall, Mall of Mysore and Garuda Mall were sanitised to welcome visitors with precautions.

The Mysuru Zoo will open at 8.30 am tomorrow and the Zoo authorities have come up with their own guidelines. “We are done with cleaning and separate entrances have been made for visitors and staff. Disinfectant mats have been put up at the entrances and there will be mandatory screening of all visitors. Suspicious cases will not be allowed entry,” Zoo Executive Director Ajit M. Kulkarni said.